Harvest years and fallow years: The life of a generator

“Companies hit hard by soaring wholesale power prices”[i] - are generators being greedy or are they finally getting a fair return?

How Generators Earn a Return

The National Electricity Market (NEM) is an energy-only market, with generators expected to derive their return from the spot price they receive for generating (having bid competitively into the market) and perhaps a little extra from supplying ancillary services (such as frequency control services and system restart services). Of course the returns from trading interval to trading interval are volatile, and generators may choose to exchange their physical positions for more certain financial returns. For baseload generation, such as a coal-fired plant, this usually means entering into swap contracts, whereas for peaking plant, such as the Snowy hydro-generation plant, cap contracts are the appropriate tool.

For simplicity, let’s confine our discussion to data from the spot market, since returns from derivatives and bilateral trades are less visible (The Australian Energy Regulator notes that the exchange-traded market is currently trading at a premium to the spot market[ii], but it has no visibility of over-the-counter markets, or internal trades by gentailers.)

In an efficient market, the returns to generators should vary between the Short Run Marginal Cost (SRMC) which is the price at which generators recover their fuel and variable costs (e.g. maintenance costs) and the Long Run Marginal Cost (LRMC) which provides a return on capital and fixed costs as well. In times of oversupply (whether due to increased supply or decreased demand) prices will tend towards the SRMC as generators compete to supply, lowering their prices until they are only just covering their costs. Conversely, in times of undersupply, prices will tend towards LRMC, as generators seek to recover a proportion of their fixed costs, in addition to their variable costs. But generators cannot offer prices which are too high, as competitors may undercut them, and high prices will provide an opportunity for new generators to enter the market.[iii]

An Appropriate Level of Return

So what sort of prices should generators expect? Jacobs’ Report to the Independent Review into the Future Security of the NEM[iv], shows the following:

But this is only showing the variable costs, i.e. the SRMC, which is the “rock-bottom” price at which generators can supply the market. We can’t expect generators to just cover their running costs and have nothing left over. It’s like saying that the cost of running your car is limited to fuel, tyres and annual servicing, when the reality is that you need to allow for its eventual replacement.

An alternative measure is the Levelised Cost of Electricity, although there are arguments that this measure is limited in assessing the actual costs an individual generator needs to recover, based as it is on generalised assumptions about the construction costs, the cost of capital and how often the generator runs. This point is set out in more detail by Alan O’Neill writing on the WattClarity website[v]. Recent analysis by the Australian Renewable Energy Agency[vi] shows the levelised costs for new generation vary widely, from less than $50/MWh to almost $200/MWh. Although aging generators may not have been required these returns when they were first built, LCOE is a benchmark to use when considering the revenues investors would be seeking in order to fund replacement plant. 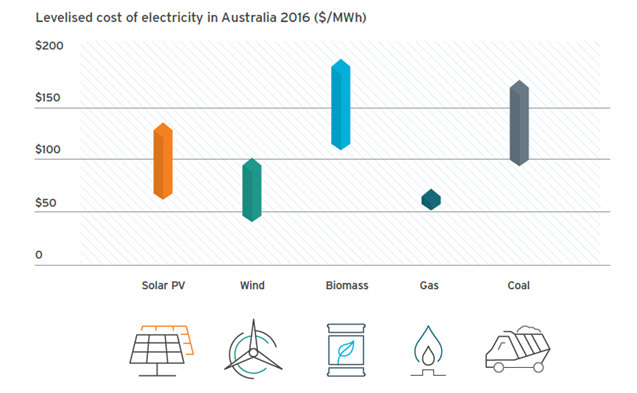 So those are the benchmarks – if we want our generators to cover their costs and put some aside to be in a position to replace themselves when they reach the end of their physical life, then they need to earn somewhere between $50/MWh and $200/MWh.

So what have they been earning the past ten years?

Returns over the Past Ten Years

If we look at average pool prices over the past ten years, we can see that prices declined over the first five years, but then increased – noting that the increases in the 2013 and 2014 financial years were amplified by the effect of the carbon tax (initially set at $23/tonne), which added about $20/MWh to the underlying prices[vii],[viii]. 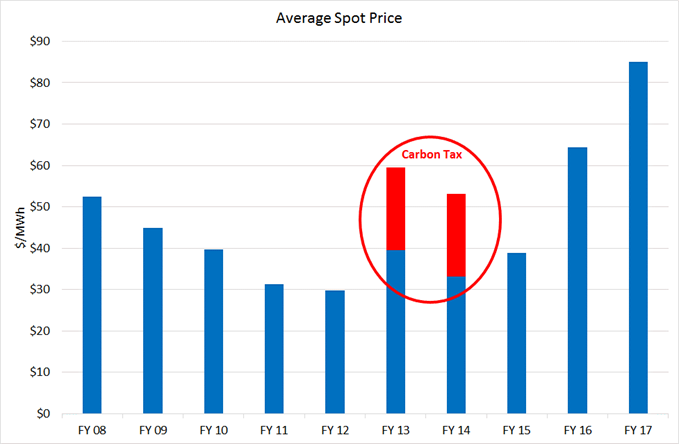 Source:  Australian Energy Council analysis based on data from NEM-Review

Excluding the years of the carbon tax, there are only three years in the past ten when the average spot price has exceeded the $50/MWh minimum levelised cost of electricity.

Why would this be?

The NEM, like all markets, is sensitive to supply and demand. As surplus capacity reduces, the price increases and vice versa. The effect of this is shown in Figure 4. As an example, in the 2012 financial year over 2,000MW of (mainly wind) generation was commissioned, reducing the spot revenue (and pool price). 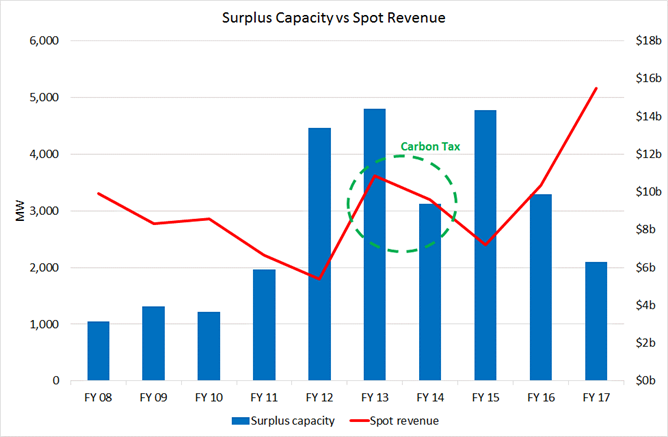 Source:  Australian Energy Council analysis based on data from NEM-Review

So, why are spot prices so high now?

The answer to this question is clear from Figure 4. Over the past three years surplus capacity has reduced as generators such as Anglesea, Northern and Hazelwood retired, and this has increased the pool revenue (and spot prices) as supply becomes scarce. In fact as Hazelwood did not shut down until the end of March, surplus capacity may fall even further, putting more pressure on spot prices during the current financial year.

Capacity changes take several years to flow through the system, therefore any new generation may take some time before its presence is felt. In the meantime, existing generators are finally starting to recover their long-term costs of operation. We cannot begrudge them a few good years after enduring many years of poor returns.

[iv] Jacobs, Report to the Independent Review into the Future Security of the National Electricity Market: Emissions mitigation policies and security of electricity supply, 13th June 2017