While the debate on coal-fired power stations has recently re-entered the news cycle in Australia, in Germany the debate formally ended this month with the passing of laws that will see its 84 coal plants close by 2038.

Germany’s legislation came 18 months after a special commission, the Commission on Growth, Structural Change and Employment (dubbed the “coal-exit” commission) handed down its recommendations.[i] As a result, Germany joins a group of countries (19 out of 80 ) that have decided to phase out coal-fired generation[ii].

In Australia, the debate’s focus has been on the desirability and need for a coal-fired power station in North Queensland. The Federal Government has committed more than $3 million for a feasibility study, although the suggestion of a Collinsville power station has been described as “the wrong piece of kit in the wrong place at the wrong time”[iii].

Australia sourced 64 per cent[iv] of our electricity from coal-fired generation last year. While this plant will continue to have play an important role in Australia’s grid for years to come (see figure 1) it is under greater economic pressure due to the growth in renewables in the National Electricity Market (NEM)[v].

In its 2020 Integrated System Plan, the Australian Energy Market Operator (AEMO) has forecast that existing coal-fired plants will not continue beyond their planned retirement dates which are shown in figure 1 (except for under its slow transition scenario). It also flagged the risk they could exit earlier if competition from renewable capacity and carbon budgets push their revenues below what is economic for them. The profitability of coal plant is being challenged by factors including the drop in grid demand in some regions in the middle of the day due to the growth of household solar PV output[1]..

Since 2012-2013, 93 per cent of investment in has been in wind and solar plant (the changing generation mix is shown in figure 2). 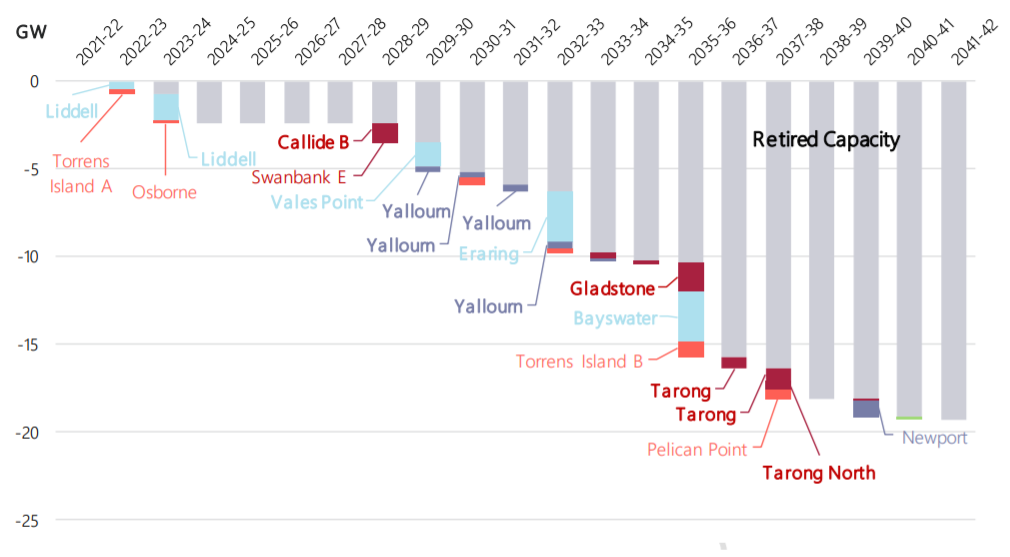 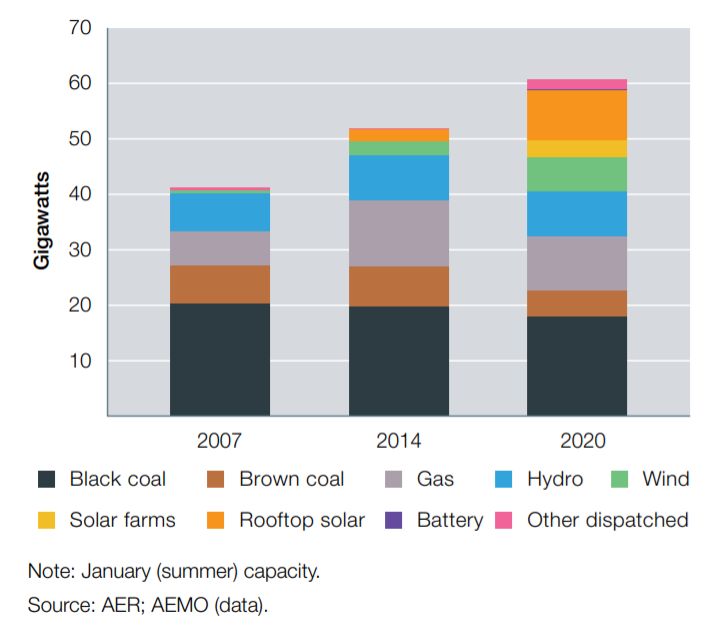 Australia is not alone in dealing with these challenges. The International Energy Agency has reported that after three years of growth and a record high of over 10,000 TWh in 2018, coal-fired power generation dropped by 3 per cent in 2019. Although while coal fired plant output fell in the US and Europe, it has grown in China and other parts of Asia and coal remains the largest generation source (36 per cent)[vii].

Germany’s “coal-exit” commission had representatives from environmental associations, scientists, trade unions, economic and energy associations, and affected regions. It presented its 275-page report in January 2019. The recommendations had utilities worried about security of supply; business groups fearing higher energy costs, while “the biggest howls come from environmentalists, who want the closure advanced to help meet Germany’s target of cutting emissions by 55 per cent on 1990 levels by 2030”[viii].

Germany’s coal exit strategy will mean a maximum of 15GW (down from a current total of 22.3GW) of black coal generation capacity along with 15GW of brown coal (down from 21.1GW) will be operating in two years. There are an estimated eight power plants expected to close this year.[ix]

Between 2023 and 2030 a maximum of 9GW of brown coal plants and 8GW of black coal plants will be able to operate, with all remaining plants expected to close by 2038. There will be reviews of the progress in 2026 and again in 2029. The current share of generation in Germany is shown in figure 3. 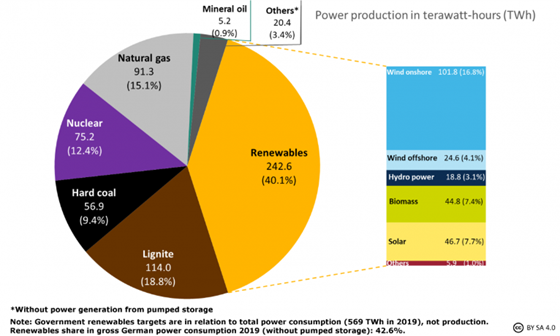 Despite the recent laws a new German coal-fired plant was commissioned in May this year just before the Parliamentary vote. This is the 1,100MW Datteln 4 power plant in North Rhine Wesphalia, owned by energy company Uniper. Work on that plant had begun in November 2007 and it was designed to replace three older units at Datteln, and another unit at the nearby Shamrock (Herne) power plant. It had been scheduled to open in 2011 but final permitting did not occur until 2015[x].

With the opening Uniper’s parent company, Finnish utility Fortum Oyj issued a statement that echoes some of the arguments heard in the Australia debate:

“…we agree that coal must be phased out, and emissions must be reduced. However, the transition to a low-emission society must be made without compromising the security of supply or an affordable cost of energy, in a socially just manner. This has been the starting point for the comprehensive solution of the German government, which allows the commissioning of Datteln 4 and systematic phasing out of coal by 2038[xi]”.

As part of the shift the German Government agreed to a compensation plan for the coal industry worth about €40 billion (AUD$60 billion) to help the transition for workers, back new infrastructure projects and compensate affected companies.

Germany’s move away from coal is coupled with its previous decision to move out of nuclear power by 2022 (described as a “unique experiment”[xii]). Germany committed to phasing out nuclear power, which had been previously seen as a bridging technology following Japan’s Fukushima disaster in 2011. The country, which had 17 reactors in operation in 2011 (supplying 25 per cent of its electricity[xiii]), has just seven still online.

The changes in Germany’s energy market means the country will become increasingly reliant on renewables and its interconnection with other European states. How smoothly it can make this transition away from traditional dispatchable generation will now be closely watched closely.

[vi] 2020 Integrated System Plan, Australian Energy Market Operator, July 2020. Under its slow change scenario there is a slowdown in the energy transition, with slower changes in technology costs and less appetite for the required investments.