The extent of the current energy challenges in Europe as a result of Russia’s invasion of Ukraine has been starkly highlighted by measures being undertaken in Germany.

In response to what it describes as the “throttling” of gas supplies by Russia Germany has introduced legislative and regulatory measures to significantly reduce gas consumption and ensure it has gas supplies on hand in the lead up to the northern hemisphere winter.

A key part of reducing its gas consumption are plans to replace gas generation. Germany’s Parliament, the Bundestag, is expected to agree a law which would allow coal-fired plants that were slated for closure under its Coal Phase-Out Act to stay connected to the grid. The aim is to replace the 15 per cent share of gas in Germany’s electricity generation.

The main objective is to fill existing gas storage ahead of winter, and also bring online four new floating gas import terminals to reduce dependence on Russian gas supplies. Since mid-June, Russia’s Gazprom has been curtailing gas deliveries via the Nord Stream 1 pipeline to Germany. Germany plans to have its first terminal operational in Wilhelmshaven on the North Sea by the end of this year with a second expected to be place by early 2023.

According to the analysis of Germany’s Federal Network Agency, the overall goal of filling the country’s gas storage facilities to 90 per cent by December requires gas consumption to be lowered significantly.  It assumes that energy conservation can reduce consumption by 20 per cent from this month and estimates the proposed new LNG terminals will contribute 13 billion cubic metres from January next year.

The Economics Minister Robert Habeck announced last week the “bitter”, but necessary step in the current situation of keeping coal plants operating while curtailing gas generation. As a result, coal-fired power plant that were to be taken off the grid this year and next through the country’s closure tender process will stay in the electricity market, where the Ministry of Economics determines that there is a corresponding threat to supply.

The Federal Ministry of Economics has written to the coal-fired power plant operators asking them to prepare plants for continued service.  Operators will have to ensure their plants are ready for permanent operation. This means having sufficient fuel supplies for at least 30 days, with operators to be reimbursed for the costs incurred via the country’s grid reserve.

To help reduce the need for gas generation, oil or black coal plants that are already in reserve are also covered by the new legislation – the Replacement Power Plants Availability Act, which is expected to be passed this week. The gas replacement reserve will be in place until 31 March 2024.  In total, around 10,000MW of non-gas reserve capacity could be involved, according to the Minister.

According to modelling by energy analysts ICIS a 10GW supply reserve could take as much as 5-6 billion cubic metres (bcm) of gas out of Germany’s power mix.

In response to the German Government’s announcement RWE, its largest energy company, has reportedly halted early retirement of employees.

Despite the changes, the Federal Ministry of Economics says it intends to stick to the coal phase-out path (see figure 1). There is clearly a risk that if more coal is used for power generation the emissions targets for the energy sector set out in Germany’s Climate Protection Act may not be met. 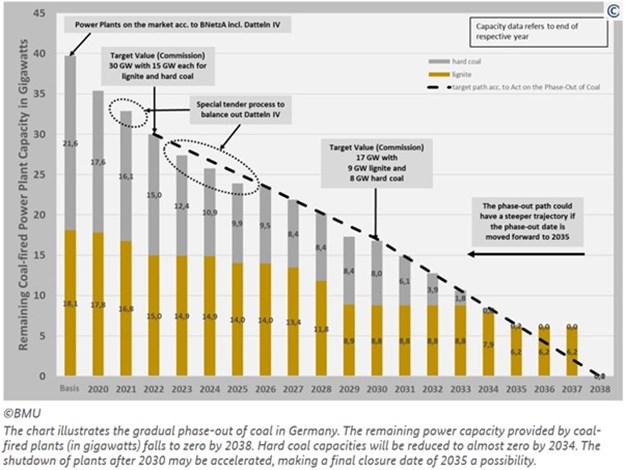 Germany has already shut more than 6 GW of black coal plants following closure compensation auctions and more than 3 GW of coal capacity was expected to close by the end of this year.

The Bundestag and Bundesrat adopted the phase-out of coal power in law on 3 July 2020, which mandated that by 2022 the power generated from both black coal and lignite (brown coal) must be reduced to around 15GW each – down from 22.8GW black coal and 21.1GW of lignite in 2019.

Germany’s plight has emerged because its only domestic fuel source for power aside from its renewable generation is brown coal, which accounts for around 9 per cent of energy consumption[i]. It has also already committed to closing all its nuclear plants with 4GW of capacity due to retire this year. Earlier this year the government ruled out extending the life of plants and it was reported that the three plants that are currently still running would not have sufficient fuel available after 31 December this year.

It imports oil, gas and black coal and is among countries now importing more coal because it's “better than more Russia”[ii].  Gas imports from Russia also face a further looming challenge - the Nord Stream 1 pipeline from Russia is expected to undergo maintenance from 11 July, which would mean no gas supplies would be coming into Germany via that source.

In another measure to deal with the gas shortage the German Government has drafted a law that allows it to take stakes in companies impacted by the soaring cost of imported gas.

The law would allow the government to assist Uniper, Germany's largest importer of Russian gas, according to the Australian Financial Review. The amended energy law would also allow importers to pass on the higher costs of the gas they are procuring on spot markets to all their customers, and so avoid insolvency.

[i] How heavily does Germany rely on Russian energy?, The Economist, 4 May 2022