Gas intervention, but will it increase supply?

At a time when the Australian Energy Market Operator (AEMO) has forecast an east coast gas shortage for 2018-19[i] the Turnbull Government is introducing a mechanism which will give the government the power to impose export controls on companies when there is a shortfall of gas supply in the domestic market.

The risk with government intervention is that it will likely worsen market conditions unless accompanied by genuine reforms. Obstacles to developing more supply through moratoriums will also continue to prevent projects that could otherwise improve market conditions.

LNG exports are bringing economic benefits to Australia but the transition to an internationally linked gas price is difficult. High prices and declining gas supplies will impact electricity at a time when flexible gas generation will be relied on to balance intermittent renewables as some aging coal fired generators retire.

AEMO Gas statement of (a lack of) opportunities

Australia’s east coast gas shortage is forecast to begin in 2018-19, with South Australia, New South Wales and Victoria forecast to face insufficient supply of gas to meet demand[ii]. In one sense the market may “solve” – if the forecast gas supply shortfall results in the price of gas rising, commercial and industrial gas users may cut back on their activities and reduce their annual consumption of gas. But this means lower output, GDP and potentially job losses if facilities close altogether.

Alternatively, if residential and business demand is met by a reduction in gas-powered generation there will be an electricity shortfall. 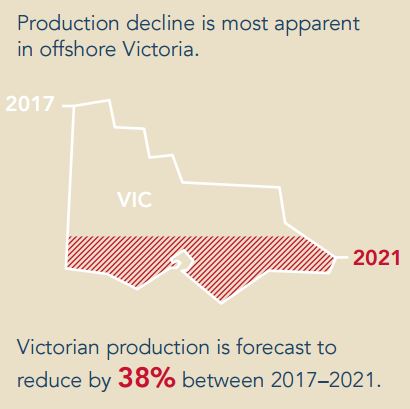 This interdependence between gas supply and electricity production will only increase because gas plays a pivotal role as a transition fuel in Australia’s lower emissions energy mix. AEMO projects that declining gas supplies could result in electricity supply shortfalls between 2019 and 2024 of approximately 80 gigawatt hours (GWh) to 363 GWh across South Australia, New South Wales, and Victoria (see Figure 1). This comes at a time when flexible gas generation will be relied on to balance intermittent renewables as some aging coal fired generators retire.

Australian LNG production continues to surge. EnergyQuest reported a strong final quarter, with an increase in the calendar 2016 production to 45.2 million tonnes (Mt), up 49 per cent in comparison to 2015[iii]. Export revenue is starting to grow quickly. In 2016, revenue was a record at $17.9 billion, up 9 per cent from 2015, making LNG Australia’s fourth most valuable export behind iron ore, coal and international education.  EnergyQuest also reports that international LNG prices remain higher than domestic prices on both the east and west coasts. Media reports that suggest the opposite are confusing long-term contract prices in Asia with occasional spot price spikes in Australia. 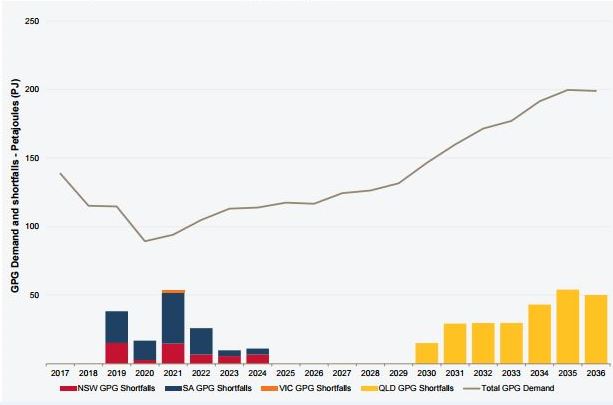 The shortage of domestic gas has led to the Turnbull Government recently announcing that they will secure domestic gas supply with the introduction of export restrictions, to ensure the Australian market has adequate supplies before exports are permitted. To secure adequate supplies, the Turnbull Government is introducing the Australian Domestic Gas Security Mechanism, which will give the government the power to impose export controls on companies when there is a shortfall of gas supply in the domestic market.  The goal is to ensure gas supply in Australia always meets the forecast needs of the local market[iv].

If an exporter is not a “net contributor” to the domestic market - i.e. they are drawing more out of the market than they are putting in, they will be required to outline how they will fill the shortfall of domestic gas as part of their overall production and exports. LNG exporters who are drawing from the domestic market will be ordered to limit exports to ensure local supply. Those exporters which do not draw more from the domestic market overall, will be licensed to export according to their forecasts. The Government will look to implement the regulations by 1 July, 2017[v]. There will be much debate over the net contribution calculation, especially since one of the LNG consortia - GLNG – appears to have always predicated their second train on being able to source additional gas supplies. If a resource is being developed – possibly under a different equity ownership from that of the LNG project – only because the LNG exporter committed to buy the output, does that count as “drawing out” of the domestic market?

The Government measures were backed by the Chief Executive of the Australian Energy Market Operator (AEMO), Audrey Zibelman, who also highlighted that the gas industry could avoid government intervention by making sure there was enough supply to meet local demand[vi].

Will this solve the problem?

The Australian Petroleum Production and Exploration Association (APPEA) has described the opposition of some state governments as the main obstacle to developing more gas supply. It also stated that the Federal Government’s export controls were short-term measures that could exacerbate tight market conditions unless accompanied by reforms. At a time when new investment is needed to create more gas supply, any intervention that creates risk is concerning.

Gary Banks, the former head of the Productivity Commission, recently highlighted that government regulation and government failure lie at the heart of the rise in power prices. Speaking about the wholesale market, Banks made the point that blaming the private sector for Australia’s energy problems risks the policy mistakes that caused it being compounded by further policy mistakes. History tells us government intervention has not always achieve the desired outcomes[vii].

New South Wales has also prevented projects that could have averted the current market conditions, whilst the current moratorium in the Northern Territory is also preventing the development of new gas supplies.

By contrast Queensland and South Australia are both supporting gas production and the economic benefit it brings the state.

Removing unnecessary regulatory burdens and lifting restrictions on exploration may provide the right set of conditions for industry to explore and develop new gas resources. The economic role of gas will remain dependent on its competitive position as a fuel of choice, competing on price, sustainability, security and amenity. One way to ensure long-term energy security is to remove restrictions and make it possible for explorers to find new gas fields and producers to develop these resources with appropriate regard to environmental protection and landholder rights.