Developing Australia’s gas resources is critical to ensure reliable and adequate supply in the immediate future. The latest gas supply and demand forecasts, in the 2016 Gas Statement of Opportunities by the Australian Energy Market Operator (AEMO)[i] highlight the critical importance of continuing to develop gas resources and the need for policy settings to facilitate gas supply in the future.

Between 2019 and 2035 the GSOO forecasts that there will be adequate supply across eastern and south-eastern Australian, although forecasts predict a shortfall of up to 50 petajoules (PJ) in Queensland (Gladstone and Townsville) between 2029 and 2035. The results come under the medium scenario (considered the most likely), which assumes no additional infrastructure development to address pipeline or processing facility constraints, and an increase in demand for gas-powered generation (GPG).

Why does the Gas Statement of Opportunity predict a gas shortfall in Queensland from 2029?

From 2029 AEMO expects a shortfall in gas supply in Queensland if there is no additional infrastructure development to address projected pipeline or processing facility constraints and there is the predicted increase in demand for gas-powered generation (GPG).

The 50PJ of projected domestic gas shortfall between 2029 to 2035 is expected to occur due to pipeline constraints along the Queensland Gas Pipeline and the Northern Queensland Gas Pipeline, processing facility constraints at Moranbah, and increased projected demand for gas-powered generation. Figure 1 shows demand and reserves for the domestic gas markets only, so excludes export LNG demand. 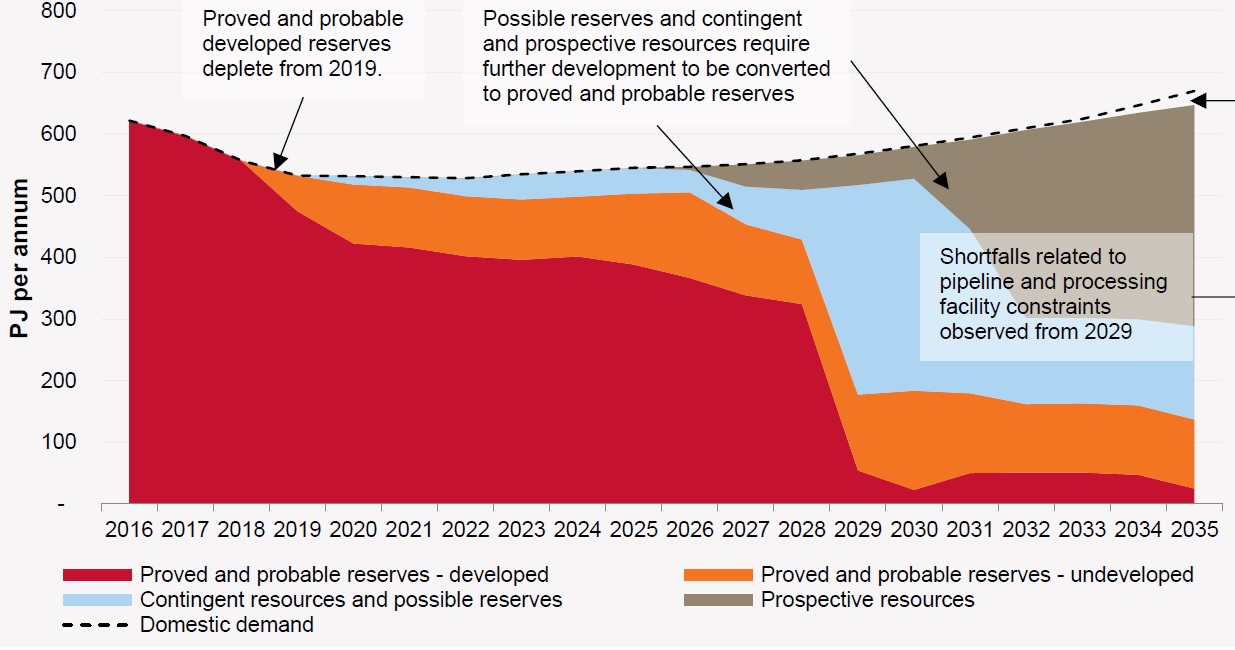 Forecast daily gas-powered generation demand in Townsville, and industrial demand in Moranbah and Gladstone are expected to increase above processing facility and supply pipeline capacities.

AEMO does, however, highlight that the shortfalls could be alleviated by augmenting the following infrastructure facilities:

Given that the predicted shortfall is also directly related to gas power generation demand, alternative generation technologies to meet the increase in demand in northern Queensland could potentially help alleviate the projected gas supply shortfalls.

Comparison of the Gas Statement of Opportunity for 2015 to 2016

The 2016 GSOO projected shortfalls are 164PJ lower than those reported in the 2015 GSOO. Although the current demand forecasts are similar to those used in the 2015 GSOO, they are slightly higher on average per year (25PJ or 1 per cent). The reduced shortfalls are mainly due to net increases in processing capacity of up to 585 terajoules (TJ) per day over the 20-year outlook period, spread across eastern and south-eastern Australia.

Gas supply shortfalls totalling 50PJ are projected between 2029 and 2035, compared to the 214PJ shortfalls forecast between 2021 and 2034 in the 2015 GSOO. Figure 2 compares the magnitude and timing of the projected shortfalls in the two GSOOs. 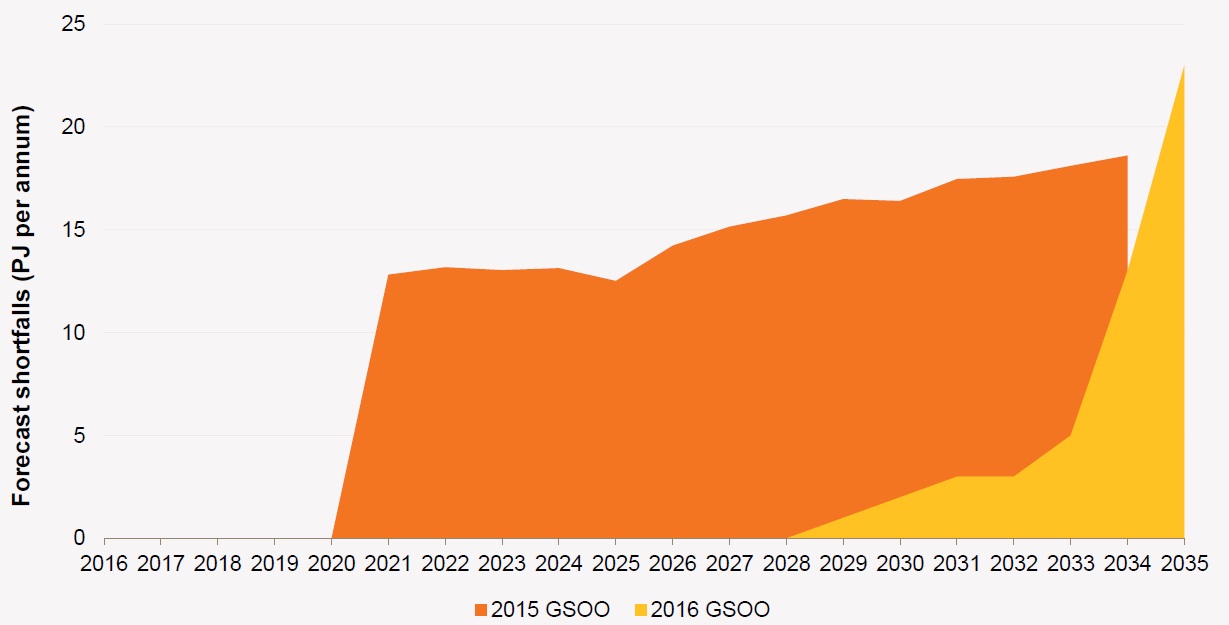 The AEMO gas supply and demand input assumptions show the uncertainty and volatility of  the market based on current information. AEMO points to changes in economic conditions, global oil prices and weather events which all have the potential to increase gas market volatility.

Regardless, with a number of mature gas fields slowing production, it is important that new proven gas reserves continued to be developed to meet future demand in eastern and south eastern Australia.

AEMO’s modelling shows gas supply shortfalls could increase under drought conditions, with increased demand for electricity from gas-powered power stations. Given the lead time and investment required to develop gas resources, this latest market data sends a strong signal to governments and the gas industry alike.

Gas is expected to continue to play a valuable role in meeting the energy needs of Australian homes and business, as well as playing a critical role as a key export commodity. It underscores the critical importance of continuing to develop our gas resources and the need for policy settings that facilitate gas supply in the future.