With the release of the latest UN Intergovernmental Panel on Climate Change (IPCC) report, debate about how quickly Australia should decarbonise and a federal commitment to net zero emissions by 2050 has been re-ignited.

Separately the CSIRO, in conjunction with ClimateWorks Australia, has undertaken an assessment of decarbonisation scenarios, including net zero 2050, to model the changes in emission trajectories for various sectors. The modelling considers the scale of energy efficiency and electrification and other fuel switching that could be associated with decarbonisation of the economy, as well as its implications for demand in the National Electricity Market (NEM).

This work forms part of the scenario planning undertaken for the Australian Energy Market Operator’s 2022 Integrated System Plan. Part of the CSIRO led Multi-sector energy modelling seeks to quantify the changing influences that would affect electricity demand under various emissions targets between 2019-20 and 2050-51.

The four scenarios[i] it considered are:

A table showing the key drivers in each scenario is at the bottom of this article.

Overall, the modelling finds that Australia could meet net zero emissions on or before 2050. Below we take a close look at some of the findings.

Achieving net zero emissions across the economy relies on four pillars of decarbonisation:

Across all its scenarios, increased energy efficiency, near 100 per cent renewables by 2050 and increased electrification all play a role while abatement of non-energy emissions is also needed across all scenarios through carbon sequestration.

The report considers that energy efficiency is one area that could be accelerated in the shift to low emissions even ahead of the grid decarbonising. Its potential uptake under each scenario is shown in figure 1. 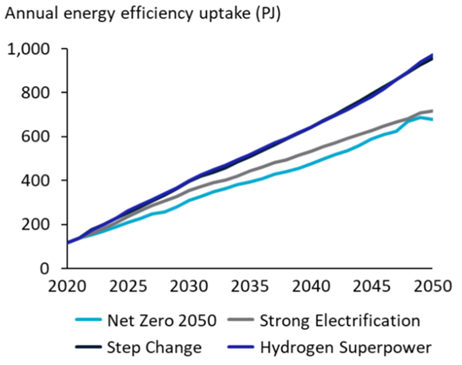 Underlying NEM demand is expected to grow in all scenarios. Under the net zero 2050 and step change scenarios electricity demand would increase by 133 per cent and 108 per cent by 2050 respectively – demand would reach 446TWh (net zero) and 398TWh (step change). While there would be increased energy efficiency expected in the step change scenario, growth in demand remains significant because of increase electrification. Electrification would include areas like heating and water services in buildings, process heating in industrial and agricultural sectors, the shift to electric vehicles and short-haul non-road transport.

Under the hydrogen superpower scenario demand would increase by 116 per cent before new industries, such as green steel and hydrogen exports, emerged. With those new industries demand growth would be 468 per cent higher, equivalent to 1063TWh, which is more than five times the current NEM’s electricity demand.

The strong electrification scenario would result in growth in NEM demand of 143 per cent by 2050, or 464TWh. 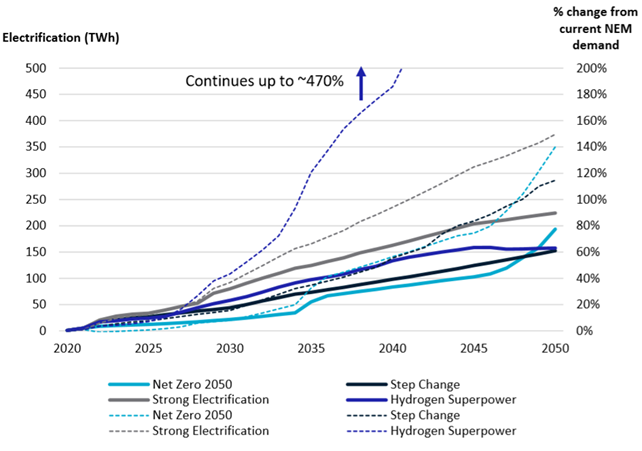 The graphs in figure 3 show which sectors would be expected to drive demand under each scenario. 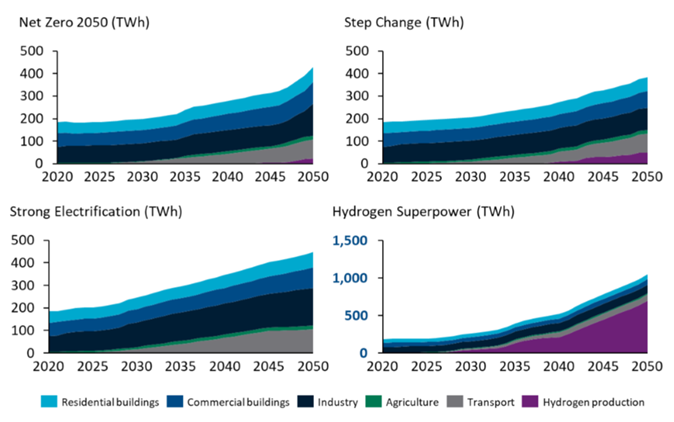 Unsurprisingly the modelling expects the deployment of renewables to accelerate.  Falling technology costs for renewable generation as well as storage, along with the ageing of coal-fired generators and the cost competitiveness of electrification with strong emissions reduction targets are the key factors behind an increasing share for renewable generation, mainly through utility-scale solar and wind farms over the projected period.

Under the net zero 2050 scenario moderate growth in demand along with state-based renewable energy targets see increased renewable generation, along with an increasing need for dispatchable storage for system stability (pumped hydro and batteries).

The other scenarios would lead to a more rapid drop in coal-fired generation – it would be phased out earliest (2035) in the strong electrification and hydrogen superpower scenarios. While some coal generation remains in the grid in the step change scenario until the late 2040s, its output is minimal and the report notes it may be forced out earlier due to the minimum operating levels (this pattern is also seen in the net zero 2050 scenario).

The change in the generation fleet forecast by the modelling is show below. 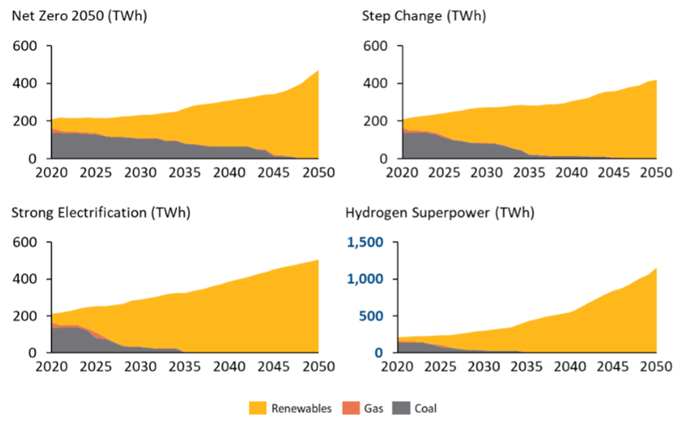 As a result of the shift in generation, there would also be a strong reduction in emissions from the electricity sector (see 5 below). 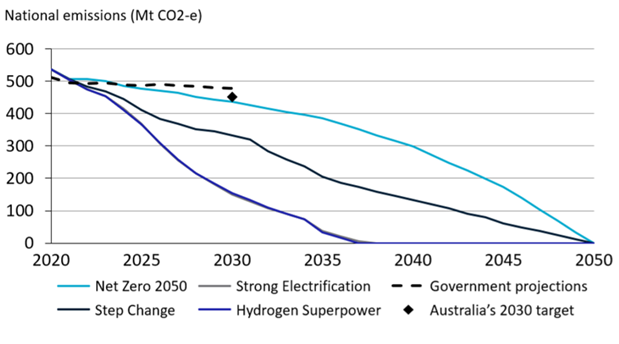 The scenario planning looks at the need for non-energy emissions from agriculture, land and hard-to-abate industrial processes to be tackled through abatement options such as sequestration.

“While it is assumed that the role for sequestering emissions is reserved for only the hardest-to-abate emissions in the economy, every scenario modelled… features some level of carbon sequestration, largely from land-based methods but with a small component from CCS ranging from between 4-14 per cent.”

Sequestration through carbon capture and storage (CCS) and land-based (which is modelling as carbon forestry) were considered. The CCS is not included for generation because it is not considered to be cost competitive. Small levels of CCS are assumed for industry.

Under the net zero 2050 and step change scenarios around 140MT CO2-e/year is sequestered by 2050. The other two scenarios have significantly higher levels of carbon forestry earlier reaching 136MT  CO2-e/year (strong electrification) and 169MT CO2-e/year (hydrogen superpower) in 2037.

The amount of emissions sequestered under each scenario is shown below. 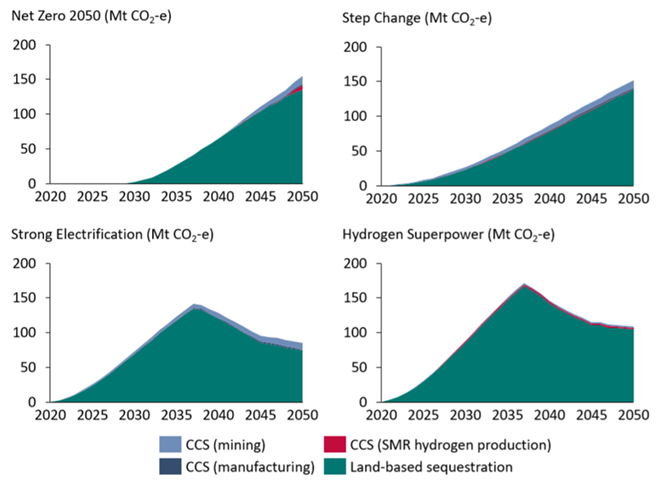 Table 1: Drivers for each scenario 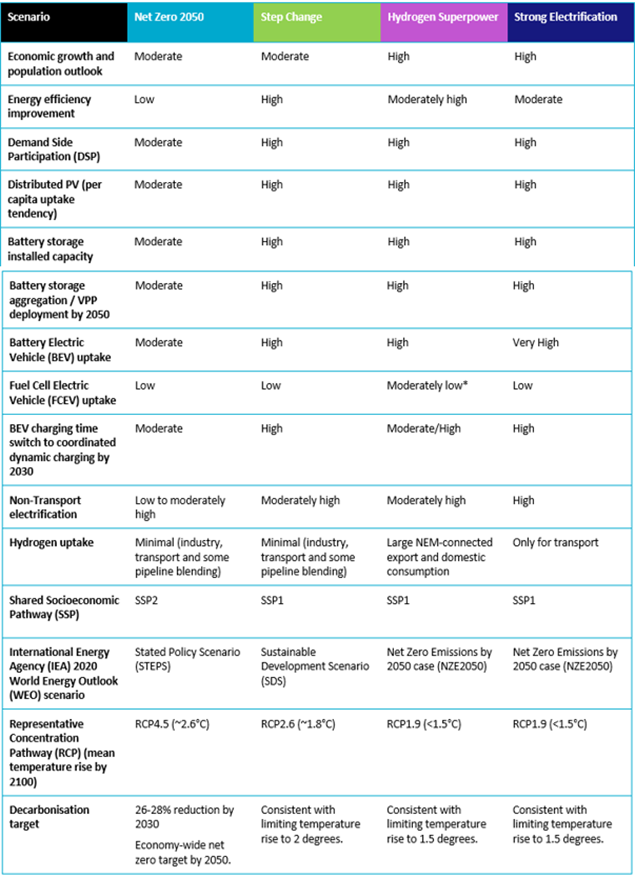 [i] A detailed outline of each scenario and key factors from the report can be found in section 2.1 Scenario Overview, Multi-sector energy modelling