Fork in the policy road: How do we map the way?

In the run up to the release of the much anticipated Finkel Review there has been new reports released that point to what they see as the key ailments with the energy sector, as well as potential remedies or directions that could be taken.

The most recent report themes tell a tale, ‘Wrestling with the electricity market transformation’ and ‘Powering through: how to restore confidence in the National Electricity Market’.

These reports – from legal firm Gilbert + Tobin (G+T) and the Grattan Institute respectively – do have a common thread: increased politicisation of energy with government interventions and uncoordinated responses leading to less than ideal outcomes. So how do they view the state of the current market and what do they see as potential responses?

Too Late To Stop?

G+T warns that it may be too late to hope for “coherent national energy policy”, while the Grattan Institute warns that politicians have responded to perceived failings by announcing a series of uncoordinated and potentially expensive government interventions in the electricity sector. It comments that “the political blame game over blackouts and security of supply is an unhelpful distraction at best.  At worst, the risk is that government make ‘knee-jerk’ policy decisions at great cost to the community”.[i]

Grattan points to the fact that the recent government announcements – SA’s energy plan, the Federal Government’s so-called Snowy Hydro 2.0, the political deal with Nick Xenaphon which included funding for a potential solar thermal power station in SA and the feasibility study into expansion of the Tasmanian hydro scheme – appear to involve significant government investment in generation. “These announcements are worrying because they may commit governments to investments prior to cost-benefit analysis. And if investments go ahead, they have the potential to undermine private investment in generation and could weaken the NEM and lead towards regulation and central government planning and control”.

G+T believes that energy politics are here to stay and likely to drive policy.  A consequence of this politicisation is the dismantling of “any coherent and integrated approach towards a national energy policy” – a trend that is described as “deeply regrettable”.

With the loss of an integrated national approach, some form of hybrid model looks likely to emerge  with the result being a single market supplemented by state initiatives.

There is a serious note of caution about heading this way, because while they point out it might have some benefits, overall without a coordinated and integrated approach, “we will quickly fall behind our global peers”.

G&T point to two distinct, but related policy challenges, which are shown in Figure 1 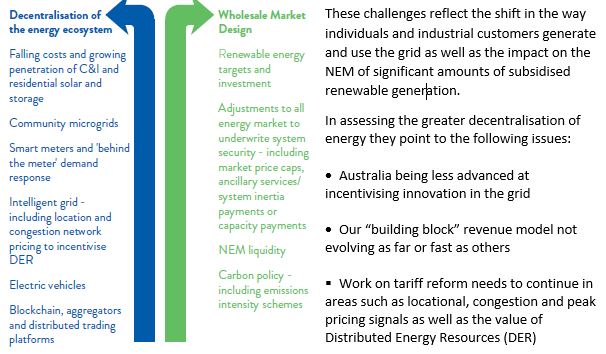 The Grattan Institute argues that there are a few tweaks that could be made to avoid the NEM falling further into chaos and that short-term reforms would give the market a chance to respond and buy time for policy makers to develop and implement the best long-term solutions.

Its report points to the need for the Australian Energy Market Commission (AEMC) and AEMO to ensure that all supply and demand options are in place to manage system security and potential shortages next summer.

More broadly, governments need to address long-term capacity risks by rebuilding investor confidence in the NEM. It indicates that that investor confidence will depend on a credible emissions reduction policy that works with the electricity market. “The cheapest (and least-distorting) policy is an explicit carbon price – either set by government through a tax or, better still, set by the market through an emissions trading scheme (cap-and-trade or an emissions intensity scheme).”

Ideally, this would be driven by the Federal and state governments agreeing to a national approach, but “if the federal government does not lead this effort, a second-best solution would be for the states to agree on a coordinated approach”.

Overall it paints these possible scenarios for the NEM:

Grattan closes its assessment of the energy sector by stating that Australia has arrived at a fork in the road, “The decisions we make in 2017 may effectively be choices between the ongoing primacy of markets, or central planning and regulation”.

[i] Grattan Institute, Powering through – How to restore confidence in the National Electricity Market