In 1971, when asked to assess the influence of the French Revolution, Chinese Premier Zhou Enlai famously remarked that it is ‘too early to say’.[1] This quip has since been used as an example of the patient and farsighted nature of Chinese leaders. So it is not surprising that after President Xi announced China’s aim to be net-zero by 2060, some commentators framed it as ‘the start of a marathon, not a sprint’.[2] But is this assessment fair?

We take a closer look at China’s pledge and how it plans to get there.

China’s pledge and the task ahead

In September last year China announced its aim to peak carbon emissions before 2030 (the previous commitment was “by” 2030) and to achieve carbon neutrality before 2060.

This announcement, made at a United Nations General Assembly conference, was unexpected as China had, until then, shown a reluctance to deeply engage in climate change forums, arguing that the responsibility for action should rest on developed nations.

Some thought the sudden shift was a political move, designed to isolate and embarrass the United States who, at that stage, were refusing to be part of international cooperation on climate change.[3] Others have pointed to the overt nature of the announcement as evidence that the nation is genuine, especially since China has now hinged its international reputation on making the transition.[4]

Yet, even with genuine intent, reaching carbon neutrality by 2060 represents a monumental task. China is currently the world’s largest emitter of greenhouse gases, responsible for approximately 28 per cent of total global emissions. This far exceeds the contributions of other countries like the United States (15 per cent), India (7 per cent) and Australia (1 per cent). The largest source of China’s emissions is its electricity sector, which is dominated by fossil fuels, especially coal, as the graph below shows.[5] 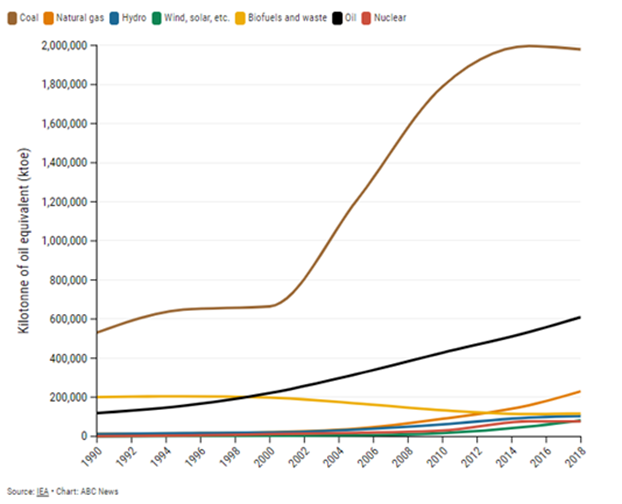 Like in other countries, China’s electricity sector represents the biggest opportunity for decarbonization in the short-term due to the increased viability of renewable generation options and improvements in energy efficiency. More than other countries though, China must contend with the sheer scale of the transition required: the size of China’s coal capacity, estimated at around 1,100GW in 2020, is larger than all other countries combined.[6] Tsinghua University, which provided the authoritative modelling to bolster China’s announcement, outlined the type of energy mix the country would require to be net-zero in 2060.[7] 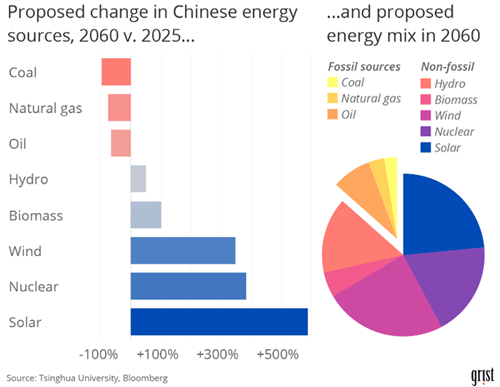 Even with this energy mix, fossil fuels would still constitute about 16 per cent of energy meaning some additional method of emissions reduction would be required (e.g. carbon capture and storage) or a very large amount of offsets.[8] In addition to its electricity sector, China must also grapple with the enormous size of its manufacturing and construction industries, which means its economic ‘reliance on hard-to-abate sectors is significantly higher than the global average’.[9] Some modelling has suggested, for example, that China’s use of iron ore would need to decrease by about 75 percent if it is to be consistent with a net-zero target.[10] Alternatively, China may seek to exclude carbon emissions embodied in imports and exports to make the target more attainable.[11]

Given the scale of change required and the number of variables from now until 2060, it is arguable that more focus should be on China’s short-term ambition. After all, it is the short-term targets that will, or will not, set China on a net-zero by 2060 trajectory.

After China made its net-zero announcement, many commentators pointed to China’s then soon-to-be-released 14th Five-Year Plan as the document to provide details on the policies China intends to adopt to begin its transition. The Five-Year Plan is a policy blueprint the Chinese Government has published every five years since 1953, and details how it intends to proceed with its overall economic and social development.

Many, such as the Climate Institute, saw the Five-Year Plan as the document that will ‘determine just how serious China is about decarbonisation’.[12] It was hoped that the Plan would lay out clear emissions reduction policies (such as a carbon emission and/or coal consumption cap) as well as targets for clean energy investment/uptake. However, following its release in March, the Plan has received a mixed response as it provided little additional detail about the nation’s decarbonisation plans.

Expectations for either a carbon emissions or coal consumption cap were not met, with the Plan instead opting to set a carbon intensity target of reducing emissions by 18 per cent per unit of GDP every year. This has caused some confusion; because the Plan does not set a five-year GDP growth target the anticipated level of emissions reduction is unclear. The table below, which estimates different GDP growth scenarios, suggests that even if the intensity target is realised, China’s carbon emissions will continue to grow.[13] 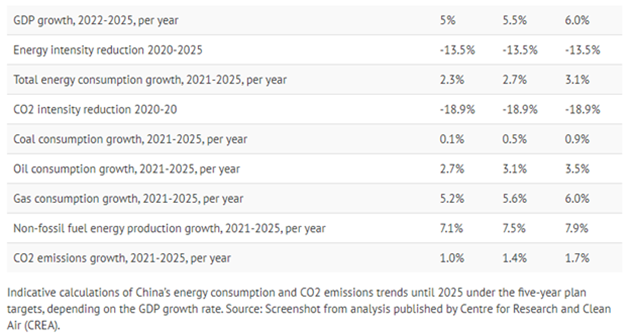 While such growth is ultimately consistent with China’s commitment to peak carbon emissions before 2030, it highlights some of the political challenges the Chinese Government faces when it comes to controlling emissions growth.

Previous “cap” policies relating to energy consumption and energy intensity have been implemented top-down, resulting in some local governments cutting power supplies to comply with the targets.[14] Meanwhile, the floated alternative, a bottom-up approach that allows each province to set a carbon cap (that is then aggregated into a national carbon cap), risks creating perverse incentives, namely provincial governments investing in carbon intensive projects now to create a high peak so reductions become easier later on.[15]

The Five-Year Plan has potentially exacerbated this problem due to the primacy it places on China achieving energy self-sufficiency to ensure energy security.[16] The emphasis on energy security over sustainability is likely to have long-term implications for China’s carbon neutrality ambition because coal is seen by local officials as the most ‘controllable and reliable source of power’. [17] This means provincial governments are unlikely to respond to warnings about new coal plants being unprofitable and eventually becoming stranded assets. These trends are already playing out in practice. With electricity demand still rising in China, provincial governments continue to approve the construction of new coal-fired power stations – it is expected that an average of 17GW of new coal plants will be built annually until 2025.[18]

How China intends to manage the phase out of coal for energy consumption has not been made clear. The Five-Year Plan does propose to increase the share of non-fossil fuels for energy consumption to 20 per cent by 2025, though this target is not binding. It is also unlikely to be sufficient – some analysis indicates that China would need to reduce the use of coal for power generation to 5 per cent - 10 per cent by 2030 if it is to become carbon neutral by 2060.[19] Right now, that appears a long way off.

However, there are likely to be significant developments later in the year when China releases another five-year plan specific to energy and electricity, and then for the first time, a climate five-year plan. These two documents will hopefully provide a level of granular detail about how China intends to decarbonise that is currently missing.

While other countries ramp up their ambition in the lead up to COP26, China’s progress to net-zero remains critical to the global effort. Their contribution was never something that could happen overnight; significant preparation and forward planning will be required. As analysts from the IEA astutely observed, ‘a marathon cannot be won only by sprinting at the end’.[20]

[1] It has since been reported that this was actually a misquote and he was responding to the 1968 student protests in France: South China Morning Post, ‘Not letting the facts ruin a good story’.

[9] Laszlo Varro & An Fengquan, ‘China’s net-zero ambitions: the next Five-Year Plan will be critical for an accelerated energy transition’, International Energy Agency, 29 October 2020

[10] Hao Tan, et al., ‘China just stunned the world with its step-up in climate action – and the implications for Australia may be huge’, Conversation, 8 October 2020

[20] Laszlo Varro & An Fengquan, ‘China’s net-zero ambitions: the next Five-Year Plan will be critical for an accelerated energy transition’, International Energy Agency, 29 October 2020