In some ways this year’s release of the market operator’s Electricity Statement of Opportunities (ESOO) seemed anticlimactic compared to its predecessor which had raised the spectre of a potential lack of supply in Victoria last summer.

If anything, the latest edition highlights the resilience of the National Electricity Market (NEM).

It does, however, highlight a couple of areas of interest. It considered reliability against two different measures and it also brought a strong focus to the growing level of low demand, which is becoming a pressing concern.

The 2020 ESOO highlights improvements in reliability performance with the traditional reliability standard[i] expected to be met in all NEM regions through this decade, even assuming no additional generation or storage is built. This compares with a potential exceedance of the reliability standard flagged last year, based on the risk of units at two Victorian power stations not being available as expected ahead of the summer peak.

The difference in forecasts from 2019 can be seen in the graphs below. 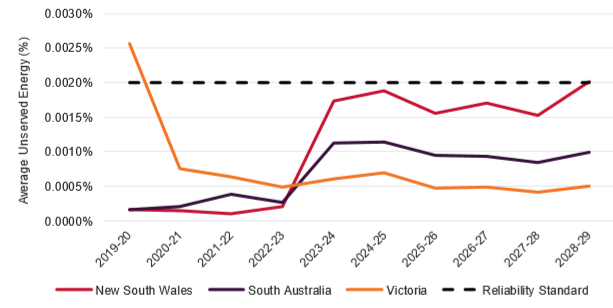 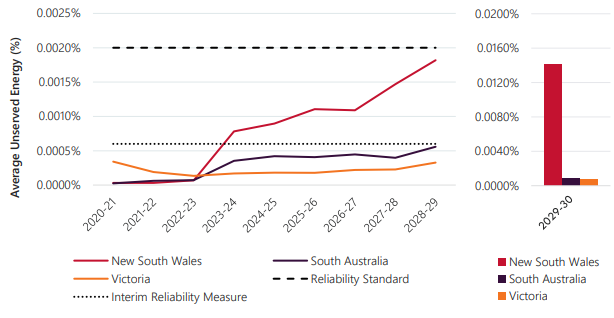 For the first time the market operator assessed supply against both this existing reliability standard and a more stringent interim reliability measure (IRM) which was agreed to by the COAG Energy Council. That IRM (shown in figure 2 above) will be in place at least until it is reviewed in 2023 and is based on only 0.0006 per cent of unserved energy (USE) - a more than threefold tightening from the traditional reliability standard.

It will also become the trigger for the Retailer Reliability Obligation (RRO). This is the second ESOO to consider the RRO, which came into effect on 1 July last year. The RRO requires energy companies and some large energy users to meet reliability levels if gaps in supply are identified by the Australian Energy Market Operator (AEMO) and confirmed by the Australian Energy Regulator (AER). Obligated parties have to hold contracts or invest in generation or demand response to support the system.

AEMO found that for the 2021-22 summer (the T-1 year for the RRO), the reliability forecasts remain below both the existing reliability standard as well as the IRM, given a flat demand outlook and minimal changes in supply.

The latest AEMO assessment also shows, with the existing supply, NSW will continue to meet the traditional reliability standard after the closure of the Liddell power station.

On the face of it, NSW may not meet the new tighter interim standard from 2023-24 because these reviews don’t include additional supply beyond what has already committed to being built. When you include expected additional new supply, as well as transmission options recommended in AEMO’s Integrated System Plan, we should confidently expect that even the tighter standard will be met in future supply assessments. AEMO also expects the NSW Government’s commitment to support 170MW of dispatchable capacity under its Emerging Energy Program to see the region meet the more stringent IRM in 2023-24.

The indicative reliability forecast indicates that expected USE is forecast to remain below the reliability standard in all regions until 2029-30 when the market operator expects Vales Point power station to cease operating (see figure 2).

The traditional reliability standard had served the NEM well since its inception and has been assessed and re-confirmed many times by the AEMC’s Reliability Panel. It represents 10 minutes a year of interruption per customer, about a tenth of what most customers experience from normal distribution interruptions. The IRM is however very conservative at only three minutes, and was provoked more by political concerns rather than good value for the customer[ii]

The mechanism used in an energy-only market like the NEM to support a more stringent reliability standard would normally be expected to be an increase in the Market Price Cap which would signal the need for investment in additional capacity to address any shortfall.[iii] But this has not occurred. The tighter standard also allows “AEMO to procure reserves if the ESOO reports that this measure is expected to be exceeded”[iv].

An area of ongoing concern and focus for the market operator is the declining level of minimum operational demand in regions. The ESOO devotes a chapter to what it sees as the challenges and opportunities of low operational demand for NEM regions.

Minimum operational demand was more traditionally due to low underlying consumer demand usually overnight, but more recently, and increasingly, is in the middle of the day as a result of the strong and ongoing uptake of rooftop solar by Australian households and businesses. The market operator estimates that for every 1MW of solar PV capacity installed there is a 0.7-0.8MW decrease in minimum demand.

Over the next five years, minimum operational demand in AEMO’s central scenario is expected to decline in all NEM regions with solar PV the key driver.

In its latest assessment the decline is occurring more rapidly than was considered likely last year in South Australia and Victoria. SA is already believed to be the first gigawatt-scale system globally to approach periods where all its power is supplied by distributed resources[v]. The decline will be slower in New South Wales and Tasmania.

In contrast to these regions Queensland is actually expected to see higher minimum operational demand due in part to lower than previously forecast installation of solar PV in the short-term and in the longer-term because of growth in overall demand with an increase small to medium business activity and population growth key factors.

The five-year forecasts for NEM regions are:

South Australia: The state’s minimum demand has occurred during daytime in the past five years. It is expected to continue to drop from 378MW in 2020-21 to 107MW in 2024-25, representing a 20-26 per cent annual decline. SA has already experienced operational demand as low as 458MW (in November last year).  AEMO estimates that the threshold level of operational demand needed for secure operation if the state is operating as an island will be around 600MW late this year and that will reduce to 400MW from late next year as four synchronous condensers become available.

Victoria: Minimum operational demand occurred in Victoria in the daytime for the first time in 2018. AEMO expects it to drop to 1145MW in 2024-25 (compared to 2745MW this year), with a similar rate of annual change to that seen in South Australia as solar PV capacity grows. Victoria is forecast to see 2.3GW of solar PV capacity installed over that time.

NSW and Queensland: The average annual rate of decline is projected to be 2 per cent each year.

Tasmania: Declines more slowly than other regions (-0.8 per cent) which the state’s minimum operational demand mainly the result of industrial loads 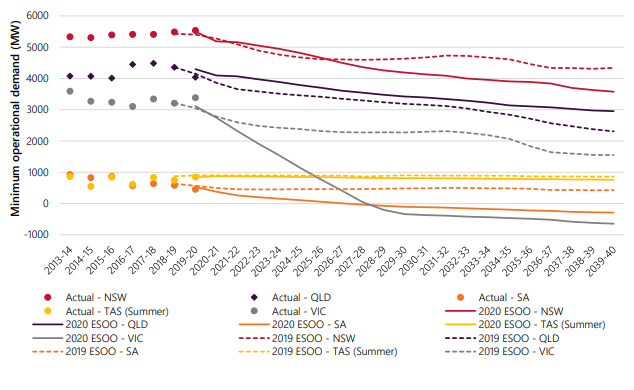 [i] The traditional reliability standard requires 99.998 per cent of the electricity consumers demand to be delivered, or the amount of customer demand that can’t be met to be kept to no more than 0.002 per cent – known as unserved energy that can’t be supplied in a regional due to lack of generation, demand side participation or interconnector capacity).