Recent events in South Australia and policy proposals, particularly in Victoria and Queensland, have ensured that the energy sector remains an area of much public discussion as well as substantial change.

Since the 28 September South Australia blackout there has been an emergency Council of Australian Governments (COAG) Energy Council meeting to discuss South Australia and two independent reports released by the Australian Energy Market Operator (AEMO), which have provided some greater clarity around the sequence of events that occurred.

Meanwhile, the Victorian Government has announced a three-part time-of-use feed-in-tariff which will increase tariffs for rooftop solar in Victoria. The increased cost is likely to be passed onto all energy consumers (including vulnerable customers) through their network and retail charges. Ironically, Victoria has also announced a draft regulatory framework for assisting customers experiencing difficulty paying their energy bills.

And further north, Queensland’s deregulation has progressed well with the Queensland Competition Authority (QCA) proposing a market monitoring report that is expected to increase customers' awareness of prices in the retail electricity market and assist with their decision-making. Queensland has also released a report into its renewable energy aspirations.

In the summaries below, we take a closer look at these areas as well as the general energy state of play by jurisdiction.

The Draft Decision follows the ESC’s inquiry into energy hardship completed in February this year. That inquiry found that energy company hardship programs are not preventing customers from building up large debts, or from being disconnected. This was followed by a final report in March which set out a proposal for a new regulatory safety net of minimum standards for customers experiencing payment difficulties. As the Australian Energy Council has outlined previously, it is currently unclear how the new framework’s implementation process will work and if it is required. There are uncertainties regarding the detail of the new framework and how it will be enforced and it could, in fact, potentially increase the cost to retailers (and ultimately customers) of the systems required to ensure effective implementation of the changes. The new framework also has the potential to confuse consumers and, as a result, actually lead to an increase in customer complaints.

The Victorian Government has also announced a partial implementation of the recommendations of the ESC’s Final Report on the Energy Value of Distributed Generation (Stage 1)[ii]. It proposes to mandate a three-part time-of-use feed-in-tariff and to add an extra element for environmental and social benefits for distributed generation owners. The quantum of this latter element has yet to be announced, but it is assumed that the recovery mechanism for the existing premium feed-in-tariff can be leveraged to fund this element.

Increased tariffs for rooftop solar in Victoria paid to distributed generation owners by retailers will be passed onto users through higher costs of production than would prevail under a market mechanism. The costs of the tariffs will be passed onto all energy consumers (including vulnerable customers) through their network and retail charges[iii]. The increase, therefore, just becomes a transfer cost from one group of energy consumers to another and does little to drive the transformation of the energy sector.

The Grattan Institute estimates that from 2009 to 2015, the total net cost of Australia’s solar feed-in-tariff policies has been $9.7 billion, paid by all electricity consumers. This highlights the need for national pricing of greenhouse emissions to drive systemic change in the energy sector - paying what is really a tokenistic carbon price to solar customers doesn’t work in the same way. 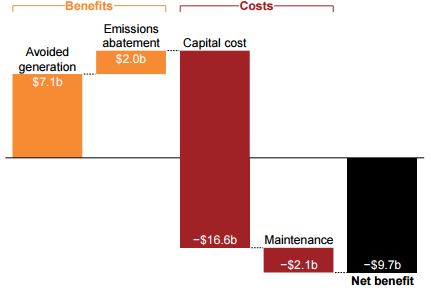 Victoria’s competitive retail market ensures that retailers have mature processes and systems in place to bill customers efficiently. The wholesale market offers a range of prices for electricity as demand changes to encourage generators to switch off and switch on. Rewarding solar customer’s much like large generators to switch off and on depending on the wholesale market offers from a range of prices as demand changes is not efficient or effective. Solar will operate regardless of whatever price is set and all will end up being another subsidy paid for by other consumers, without any real benefit.

In another policy announcement in Victoria, on 3 October the Transition to Metering Competition in Victoria Options Paper was released by the Department of Environment, Land, Water and Planning of Victoria. The Victorian community and industry stakeholders are able to provide their views on how Victoria can best transition to the new national arrangements for metering competition for households and small businesses[iv].

On 12 October, the  Panel released the Credible Pathways to a 50 per cent Renewable Energy Target for Queensland Draft Report. The Draft Paper found that the state has strong potential to grow its renewable energy industry, based on falling technology costs, market dynamics and a current pipeline of around 2500 MW of new projects in regional Queensland. It estimated that meeting the target would be cost neutral, but this was based on the interesting assumption that all existing thermal generators would be willing to continue to operate at “reduced profit levels despite the portfolio benefits of closing some of this generation. The panel noted that closure of “even one significant coal-fired generator would be expected to lead to higher wholesale prices”.

The Panel also found that giving preference to renewable generation in Queensland over other states is less efficient from a national perspective when considering national emissions reduction outcomes.  The report encourages the Queensland Government to work at a national level to develop and implement nationally integrated climate change and energy policies to maximise efficiencies in emissions reduction and uptake of renewable energy.

Following the Queensland Government removal of retail electricity price regulation for residential and small business customers in south east Queensland (SEQ) from 1 July 2016, the QCA has proposed a market monitoring report. The report is expected to provide information on prices, the frequency with which customers change retailer, and a number of additional matters concerning the operation of the SEQ retail electricity market for residential and small business customers during 2016–17. Much like the ESCOSA Energy Retail Offers Comparison Report, the report is expected to increase customers' awareness of prices in SEQ's retail electricity market and assist with their decision-making.

On 28 September a severe storm damaged transmission and distribution electricity assets in South Australia and a sequence of cascading events led to a state-wide power outage. On 7 October following that blackout, there was an emergency Council of Australian Governments (COAG) Energy Council meeting to discuss South Australia and energy security.

Two independent reports from Australian Energy Market Operator (AEMO)[vi] have provided additional clarity around the sequence of events that occurred, but also revealed the need for more detailed work to help improve system security into the future. The emergency COAG meeting agreed to establishment of a panel to review energy security and the National Electricity Market, to be chaired by the Commonwealth Chief Scientist, Dr Alan Finkel, it has become known as the Finkel Review and is expected to provide a preliminary report by the end of the year.

Regarding electricity prices in South Australia, the Essential Services Commission of SA (ESCOSA) released its Energy Retail Offers Comparison Report 2015-16 in August[vii]. The Report compares electricity and gas retail offer prices available to South Australian residential and small business customers during the financial year 30 June 2015 to 30 June 2016.  According to the report, residential customers on a standing offer could have saved up to $476 had they switched to their retailer’s lowest-prices Market Offer. Furthermore, residential customers could have saved up to $694 had they switched to the lowest-priced Market Offer available in the market. Figure 2 shows the change in estimated annual Standing Offer and the average Market Offer bills for each retailer between 30 June 2015 and 30 June 2016. 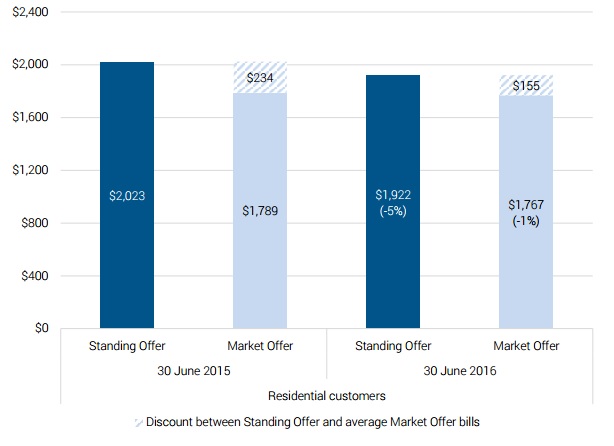 The Independent Pricing and Regulatory Tribunal (IPART) released its Review of the Performance and Competitiveness of the Retail Electricity Market in NSW from 1 July 2015 to 30 June 2016 Draft Report in September[viii]. The Draft Report highlighted that competition for residential and small business customers in the NSW retail electricity market is delivering customers greater choice, service innovations and prices consistent with a competitive market. Additionally IPART considers that the recent price changes retailers announced in July 2016 reflect changes in the underlying market costs of supplying small customers, and are therefore consistent with a competitive market.

IPART will prepare advice on the retail offers and technology available for solar energy customers. The NSW Government has asked IPART to report by the end of November on the types of products and services available to residential solar customers in the lead up to the closure of the NSW Solar Bonus Scheme on 31 December 2016.

Input is expected to be obtained from the solar industry and energy retailers about different tariff structures being offered to solar customers, the types of electricity meters available and the services they provide, and any storage or other products to help manage electricity use and bills.

In the Australian Capital Territory (ACT), the Independent Competition and Regulatory Commission (ICRC) on October 24 released an issues paper as the first step in determining retail electricity prices to apply in the ACT from 1 July 2017[ix]. The ICRC has been asked by the ACT Government to determine the price of electricity for small customers who purchase their electricity from ActewAGL Retail on a standard customer contract.

The paper outlines the ICRC’s pricing approach and sets out issues that may be relevant to this price investigation. The ICRC is expecting to release the draft report and proposed price direction on February 2017.

In Tasmania, Dr John Tamblyn has replaced the Hon Warwick Smith, who recently completed the interim report, as lead of the joint Commonwealth and Tasmanian Government study into the feasibility of a second Tasmanian electricity interconnector. Following Mr Tamblyn’s appointment, the timeline for completion of the study has been extended to January 2017[x].

[ii] Stage 2 of the review looks at network benefits and is yet to be completed.

[viii] Independent Pricing and Regulatory Tribunal (IPART), 2016, “Review of the performance and competitiveness of the retail electricity market in NSW – From 1 July 2015 to 30 June 2016”