The Federal Cabinet recently met to consider the Government’s plan for a net zero emissions by 2050 target.

This has proved challenging for the Coalition partners. Some government members have  been seeking stronger action on interim targets such as NSW Liberal Senator Andrew Bragg, Chair of the Parliamentary Environment and Communications Legislation Committee. Yesterday he argued Australia could meet a 2030 target of 40 per cent. The current 2030 target is 26-28 per cent below 2005 emissions.

The push for even stronger interim targets has emerged in the lead up to the Glasgow Climate Summit - which will run from 31 October to 12 November – and has been reinforced by other countries increasing their commitments ahead of COP26, and the Intergovernmental Panel on Climate Change’s most recent assessments that strong and sustained reductions in emissions would limit climate change.

Federal Labor supports a net zero target by 2050 and has also said it will set an interim target before the next Federal election and flagged it would legislate the 2050 target if it won the next election.

So, what’s the state of play on interim targets here and overseas? We take a look at some of the targets that have been set both domestically and internationally.

While the Federal Government has been considering locking in a net zero commitment, most states have also committed to setting stronger interim targets for emissions.

The Business Council of Australia (BCA) has proposed a transition and coordinated national pathway for lower emissions, and called for Australia to boost its ambition for the 2030 emissions reduction target to 46 to 50 per cent economy-wide against 2005 levels. In doing so the BCA has noted that 14 of our 20 largest trading partners, including the US, the UK, Japan and South Korea, have all committed to net zero by mid-century while also increasing their 2030 ambitions (see below).

The Australian Energy Council has already committed to a net zero by 2050 target in June last year while the electricity sector has led the way in reducing carbon emissions and is expected to continue to do so - as can be seen in figures 1 and 2 below.

Since the 2020 projections were released further energy developments, such as the NSW Government’s Electricity Infrastructure Roadmap and the announcement of earlier closure for the Yallourn Power Station, suggest the projection for electricity emissions to drop to 111Mt in 2030 (shown in figure 2) will be bettered. We now need to see more contributions from other sectors. 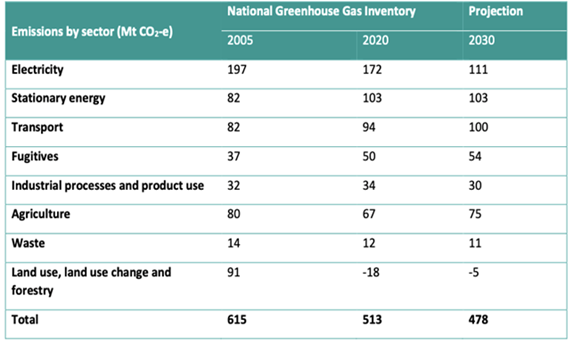 Australia’s Emissions Projections Report 2020 also shows NEM carbon emissions falling by 50 per cent between 2005 and 2030 (from 176Mt to 88Mt) as a result of increased renewable generation and a decline in coal generation. Further reductions can be anticipated beyond 2030.

States have also been setting more ambitious targets for emission reductions. Victoria, NSW and SA – along with The ACT and Northern Territory – have all committed to a 50 per cent reduction in emissions by 2030, representing around half of the country’s total emissions.

State government targets, all on 2005 levels, include:

NSW increased its target to 50 per cent (up from 35 per cent on 2005 levels by 2030) this year , based on updated projections and objectives for its Net Zero Plan.

Queensland has a target to reach zero net emissions by 2050 with an interim target for at least a 30 per cent cut in emissions on 2005 levels by 2030.

South Australia  has set interim goals to reduce the state’s emissions by more than 50 per cent below 2005 levels by 2030 on the way to reaching net zero emissions by 2050.

A key task for the Federal Government will be to form a national and co-ordinated approach across the state’s emissions reduction plans.

Looking globally, it is also becoming common for countries that have adopted net-zero pledges to also adopt an interim target. 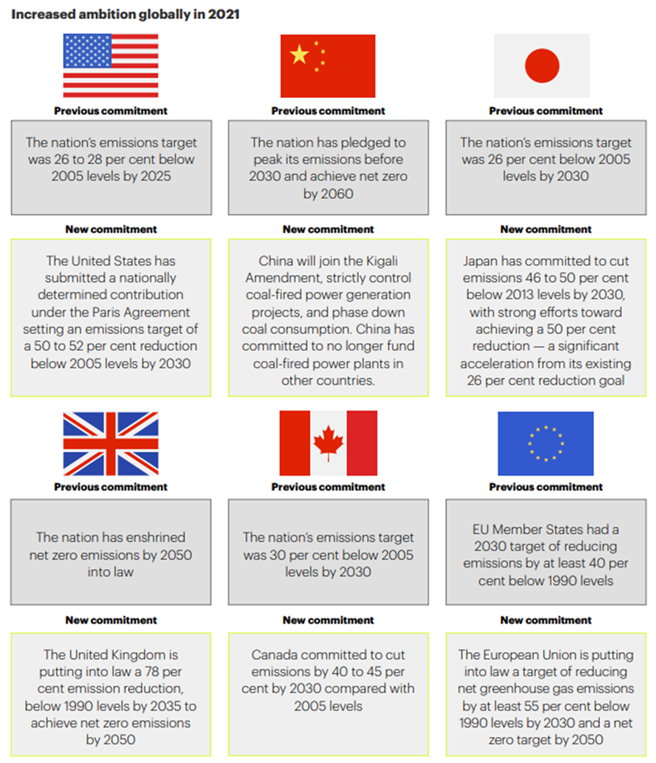 In April, President Biden announced a new target for the US to achieve a 50-52 per cent reduction by 2030 (on 2005 levels) in economy-wide net greenhouse gas pollution. The target is consistent with the Administration’s goal of achieving net-zero greenhouse gas emissions by 2050.

The Biden Administration states the 2030 target “picks up the pace” of America’s emissions reduction. According to the White House, to develop the goal, the Administration analysed how each sector of the economy can drive innovation, new opportunities and competitiveness, while cutting pollution.

Earlier this year the UK Government announced its intention to set the “world’s most ambitious climate change target” to reduce emissions by 78 per cent by 2035 (on 1990 levels). The Government’s sixth Carbon Budget limits the volume of greenhouse gases emitted over 2033 to 2037, taking the UK more than three-quarters of the way to reaching net zero by 2050. The new target was enshrined in law at the end of June 2021.

“The UK over-achieved against its first and second Carbon Budgets and is on track to outperform the third Carbon Budget which ends in 2022. This is due to significant cuts in greenhouse gases across the economy and industry, with the UK bringing emissions down 44 per cent overall between 1990 and 2019, and two-thirds in the power sector.”

“Moreover, the UK continues to break records in renewable electricity generation, which has more than quadrupled since 2010 while low carbon electricity overall now gives us over 50 per cent of our total generation.”

Prior to enshrining its net zero commitment in law, the UK had a target of reducing emissions by 80 per cent by 2050 – but its sixth Carbon Budget announcement is aiming to achieve almost the same level 15 years earlier.

The EU plans to reduce carbon emissions by 55 per cent by 2030 (on 1990 levels), under a new law between member states and the EU Parliament. This target was initially announced by EU leaders in December 2020, but there had been pressure from the EU Parliament and environmental groups for the law to go even further with a 60 per cent reduction (previous EU targets had called for a 40 per cent cut).

Earlier this year, Germany’s top court concluded that a law passed in 2019 had failed to make sufficient provision for cuts beyond 2030. Under the new targets, Germany would aim for net zero emissions by 2045, five years earlier than initially planned.

In April, Japan’s Prime Minister Yoshihide Suga said the country will aim to drop emissions by 46 per cent by 2030 (on 2013 levels). This is an increase from its earlier goal of 26 per cent, to achieve carbon neutrality by 2050. He said Japan would further try to push the reduction as high as 50 per cent.

Japan’s progress toward reducing reliance on fossil fuels was hindered due to the closures of most of its nuclear plants after the 2011 Fukushima nuclear plant disaster.

The country expects non-fossil fuel power supply sources to account for roughly 60 per cent of its energy mix in 2030-31 (the Japanese financial year runs April-March) under its draft Strategic Energy Plan released in July. The new plan is intended to be finalised before Japan submits its Nationally Determined Contributions ahead of COP26.

Under the current energy plan, developed in 2015 the FY 2030-31 energy mix was targeting renewables to account for 22-24 per cent, with nuclear 22-20 per cent, LNG 27 per cent, coal 26 per cent and oil 3per cent of total power generation. Under the new draft, Japan expects renewable energy to increase to 36 per cent-38 per cent of the country's energy mix for power generation in FY 2030-31 - with the 1 per cent from hydrogen/ammonia and 20-22 per cent from nuclear generation.