After four years of reducing electricity consumption, Australia’s electricity demand grew in 2015 with Queensland and New South Wales the major mainland states contributing to the increase.

Between 2011 and 2014 energy consumption fell in Australia largely as a result of improvements in energy efficiency with new houses having better insulation and more energy efficient appliances. At the same time, there was strong growth in the installation of residential solar photovoltaics (PV). Solar PV installations grew from 1.372 million in 2011 to more than 4 million in 2014.[i]

Table 1 shows the percentage change in energy consumption by state and territory across Australia, as well as the total increase in power used.  These figures are net of consumers’ use of their own distributed energy, such as rooftop PV. Queensland had the biggest jump in energy usage from 2011 to 2015, while energy consumption grew more slowly in NSW, Western Australia, and Tasmania in 2015. Electricity demand fell in Victoria, South Australia and the Northern Territory.

Identifying trends in energy demand is challenging, especially when trying to interpret a single year’s change. Year-on-year climate patterns can have an impact, for example, and mask the underlying trends. And 2015 was Australia’s fifth warmest year on record, while in February a hot spell led to records being set in large parts of the NT, Queensland, outback SA and northern NSW[ii].  Regardless, a few other general observations can be made on demand trends.

The big changes on the prior year are the fall in Victoria and the increase in Queensland. Key contributors in each case are the changing fortunes of industrial producers. Queensland’s liquefied natural gas (LNG) industry has driven higher demand for electricity with three large LNG projects, Queensland Curtis LNG, Gladstone LNG, Australia Pacific LNG coming into operation. First export took place in December 2014.

The high Australian dollar over the past few years had a dampening effect on annual energy growth, with declining investment in manufacturing. There was also less investment in the construction sector. The high dollar had a negative impact on Australian exports, as Australian manufacturers increasingly sourced cheaper manufacturing from emerging Asian economies.

The Australian dollar has fallen 37 per cent from the record high of $US1.1081 it reached during the height of the mining boom in 2011[iv]. A lower Australian dollar is expected to help drive increased demand in non-mining industries like tourism, higher education, services and manufacturing, and help drive investment[v]. The lower dollar also supports exporters as the cost of production falls relative to the rest of the world. Manufacturing output thus looks to be improving, which will tend to increase electricity demand. Peter Burn, Australian Industry Group's head of policy, noted that "the lower dollar is clearly helping and, if it persists at this level or even falls a bit further as many are expecting, then that will also help domestic producers[vi].”.

Inevitably, population growth tends to lead to demand growth. But in recent years, changing consumer behaviour including more efficient appliances and new homes, a greater awareness of consumption due to price rises and the take up of solar hot water and rooftop PV, has led to lower consumption per household. This has often outweighed population growth.

Table 2 compares demand growth and population growth by state/territory. The overall picture is mixed with some states recording rises in residential demand and others falls even though all jurisdictions have had some growth.

Table 2: Changes in energy consumption and population growth in comparisons

Population growth means greater economic activity overall, which is usally a driver of business demand for electricity. However in its 2016 National Electricity Forecasting Report, AEMO expects that despite population growth consumption across the NEM is expected to remain flat over the 20-year outlook period. It points to advancing energy technology and more consumers generating their own electricity from solar PV as key factors in this[viii]. Establishing a firm relationship between the two variables is tricky, though.

In Queensland, Energex has noted less engagement from Queenslanders over their electricity consumption. Figure 1 highlights that demand in households without solar installations dropped at a faster rate over the five year period to July 2014, before flattening out. Meanwhile, average consumption by solar households increased in 2014-15. Since June 2014, homes with solar have been consuming (on average) more electricity than non-solar households, reflecting the fact that those without solar PV have greater incentive to manage their electricity usage and power bills, while those with solar panels are less incentivised to be as energy efficient, including, according to Energex[ix] using their air conditioners “less responsibly”. 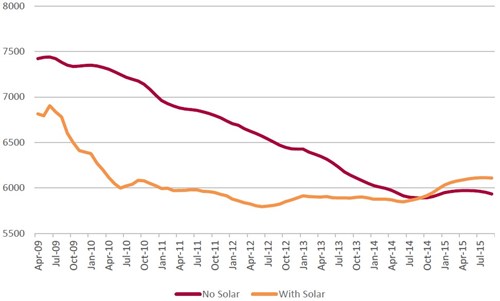