The overseas-based Institute for Energy Economics and Financial Analysis (IEEFA) recently published its paper Towards a Domestic Gas Reservation in Australia,[i] alleging that a domestic gas reservation policy fixing existing and future prices at $5/GJ would stimulate the economy and bring down electricity prices. But could it really do all this? We take a look.

The author of the report claims that consumers paid $3-4/GJ for gas prior to 2014 (prior to 2015 in parts of the report).[ii] However there is no indication as to whether this is a field price, a city gate price or a price at the customer’s meter. The author also makes no allowance for load factor, assuming that a gigajoule of gas on a peak day in winter has the same value as a sleepy Sunday afternoon in the middle of spring. Finally, there is no reference provided to their assertion.

In contrast, the Gas Price Trends Review 2017 commissioned for the COAG Energy Council,[iii] shows that over the period of the study Australian weighted average wholesale market prices for large industrial customers (those who would attract the cheapest price for gas) were only less than $4/GJ in 2006, and the city gate delivered price has always been $5/GJ or more. The below graph tells the tale: 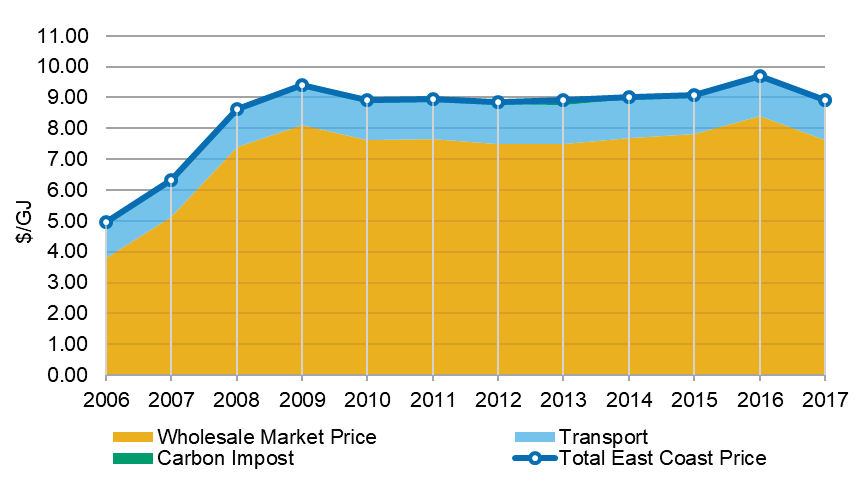 Claim #2: Gas consumers should have been paying …

The report states, “According to the ACCC, Australian gas consumers should have been paying the netback price of $5.46/GJ for spot gas in May 2019”.[iv] Unfortunately the source cited is incorrect, so the justification for this assertion cannot be verified.

However, relying on the Australian Competition and Consumer Commission’s (ACCC) latest Gas Inquiry Interim Report,[v] it shows LNG netback prices of more than $6.50/GJ for 2019 and 2020, as far back as July 2017 (Figure 2), indicating that the $5.46/GJ figure cannot be substantiated. Of course these prices are at the Wallumbilla Hub, and will need adjusting upwards for haulage and load factor to deliver the gas to the city gate, and ultimately customers’ premises. 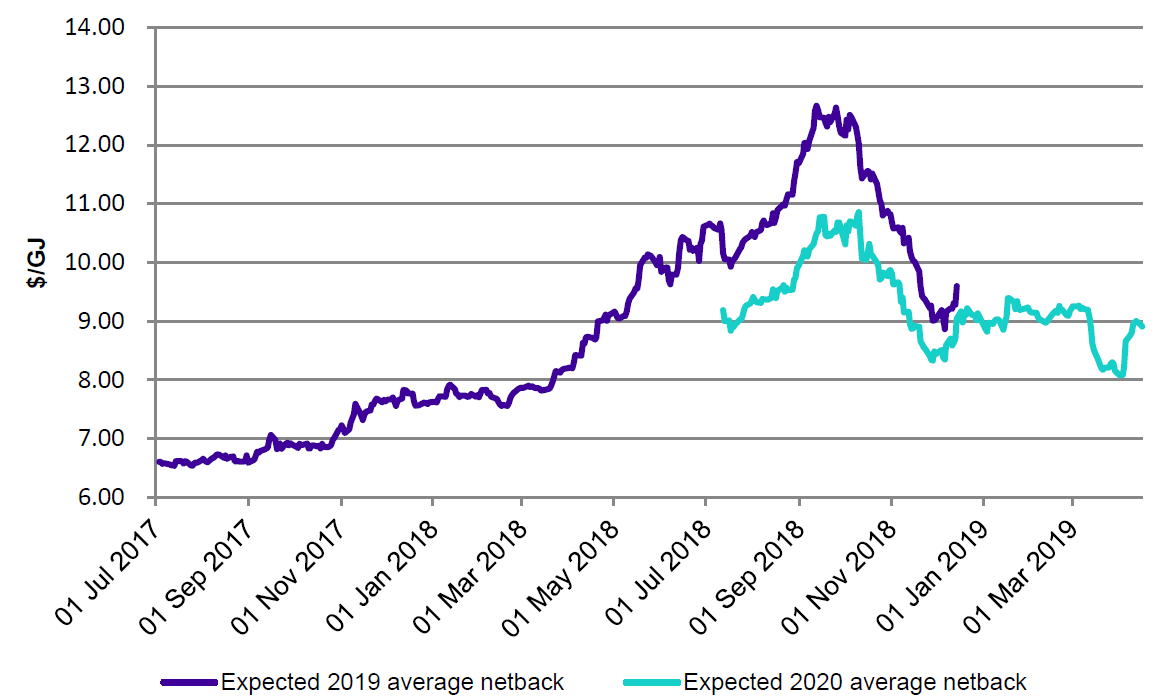 Claim #3: Gas sets the price of electricity in Australia

Concentrating on the National Electricity Market (NEM), the lowest cost marginal generator sets the dispatch price. So it is simply wrong for the report to make the sweeping statement that “gas sets the price of electricity in Australia.”[vi]

Evidence such as the Australian Energy Market Operator’s most recent Quarterly Energy Dynamics Report[vii] shows that other fuels set the price in every region of the NEM for significant periods of time, as shown in the following graph:

While WA has a domestic gas reservation (DGR) policy, it is not successful. In its Inquiry into Microeconomic Reform in Western Australia,[ix] the Economic Regulation Authority (ERA) said that, “introducing a policy that artificially restrains price rises does not necessarily provide a sustainable approach to achieving efficient outcomes”, and noted “at the very least” it has the following negative consequences:[x]

The ERA concluded, “the DGR policy is likely to inhibit development of the Western Australian gas market in the long term”.[xi] Its recommendation was to “Rescind the DGR policy as soon as practicable”.[xii]

Claim #5: A Domestic Gas Reserve Can Have a Positive Effect on Investment[xiii]

This conclusion of the report is at odds with the ACCC’s Inquiry into the East Coast Gas Market.[xiv]

The ACCC Inquiry cited the former Bureau of Resources and Energy Economics Gas Market Report[xv] - an analysis of studies that had been conducted in the Australian market relating to reservation policies - which said, “It is generally accepted that the higher domestic gas prices from linking to an export market are due to market dynamics and not a market failure. While there would be winners from a reservation policy, the gains to the winners (gas users) are unlikely to offset the direct economic losses to producers, and the broader economic losses that would arise over the longer term.”[xvi]

The Inquiry did not identify “any market failure in the east coast gas market that would justify the introduction of a gas reservation policy”.[xvii]  Instead it said that, “[t]he gas supply issues … would not be fixed by a reservation policy; in fact they could be worsened if a reservation policy was enacted which artificially depressed prices in the short term and discouraged investment in new gas supply, thus reducing the likelihood of required supply diversity.”[xviii] Finally it recommended that “gas reservation policies should not be introduced, given their likely detrimental effect on already uncertain supply”.[xix]

When tested against the available evidence, the IEEFA report does not pass muster, making unjustified assertions and drawing a conclusion which does not accord with the views of regulators such as WA’s ERA and the ACCC.

Short-term market interventions to the benefit of one sector of the economy do little to address the underlying cause of supply limitations – a need for governments to facilitate responsible gas exploration and development.