In 2015 Australia became the world’s second largest exporter of liquefied natural gas (LNG). Australia is tipped to reach the number one spot by 2020, surpassing Qatar, which has been the world’s largest LNG exporter for almost a decade. 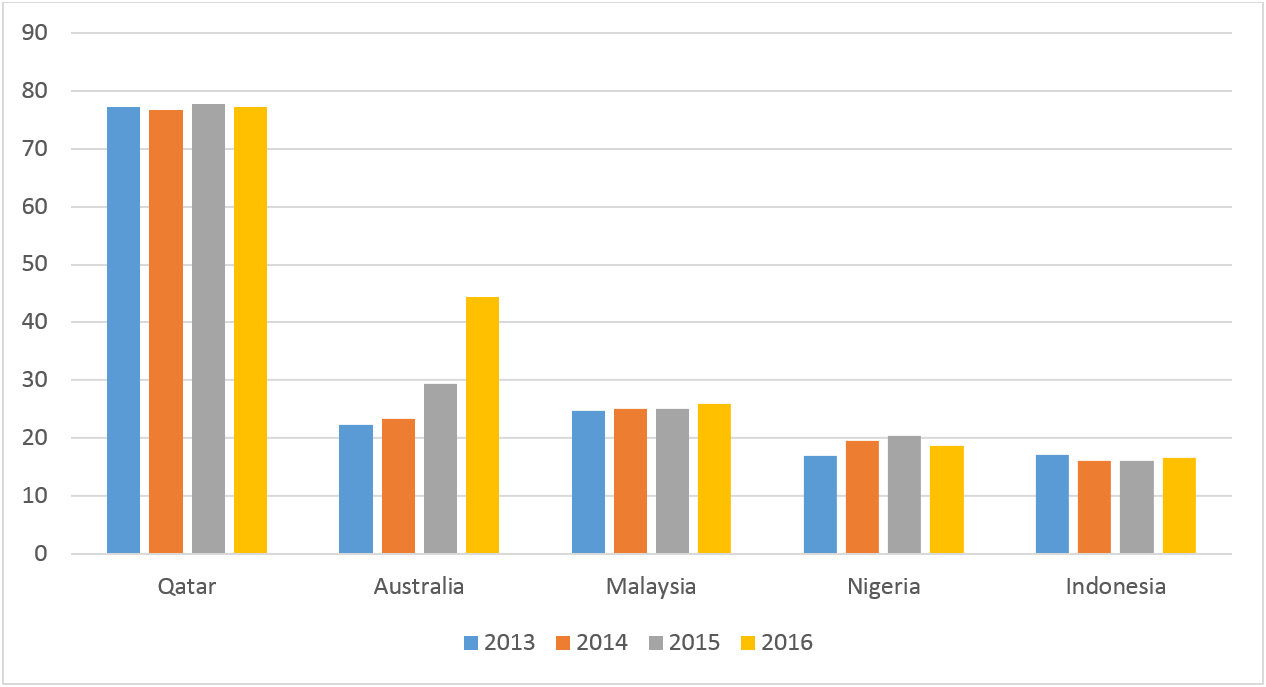 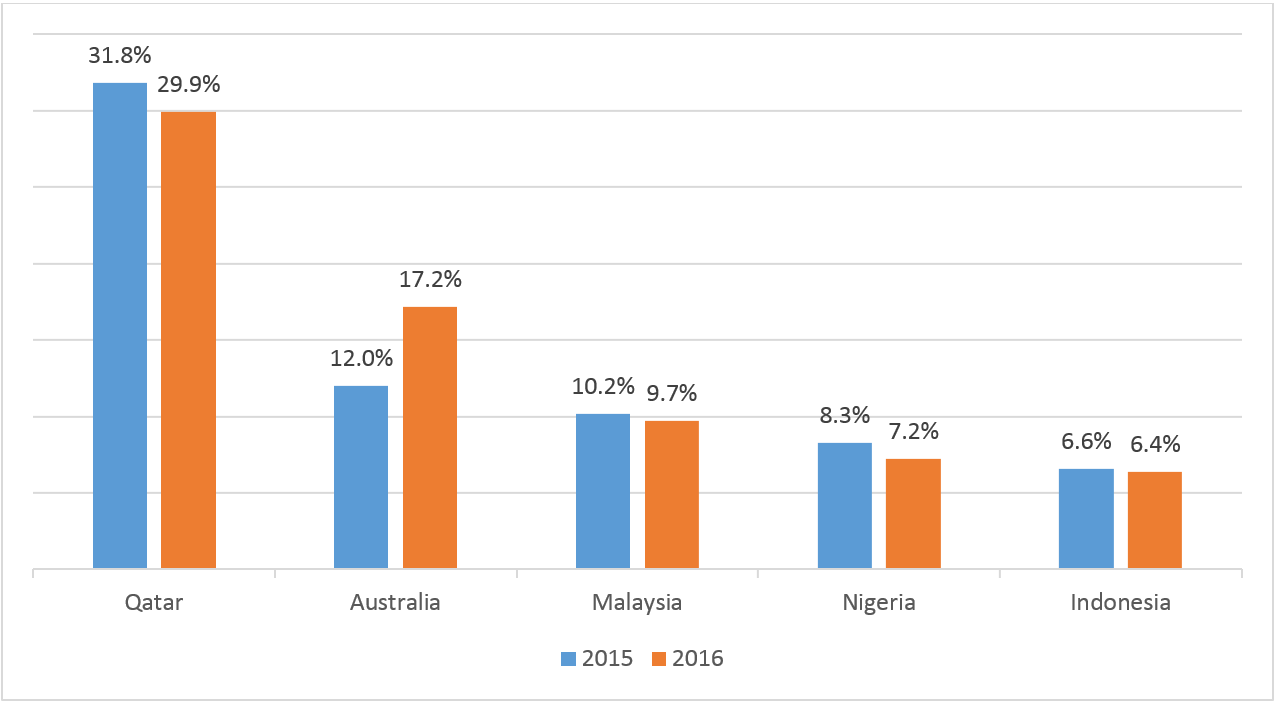 In 2015, Australia’s market share ranked a distant second to Qatar’s 31.8 per cent share (Figure 2). But due to new facilities coming on stream - Queensland Curtis LNG in 2014, Gladstone LNG in September 2015 and Australia Pacific LNG in December 2015 - Australia gained significant ground in 2016, and as these LNG projects ramp up to full capacity, Australia is expected to gain continued growth until 2020.

Australia’s major LNG export markets are Japan, China and South Korea with several other possible markets emerging in Asia (Figure 3). More than half of Australia’s total natural gas production was exported in 2016. The Australian Energy Market Operator (AEMO) expects Australia’s LNG exports will account for 80% of production by 2020. 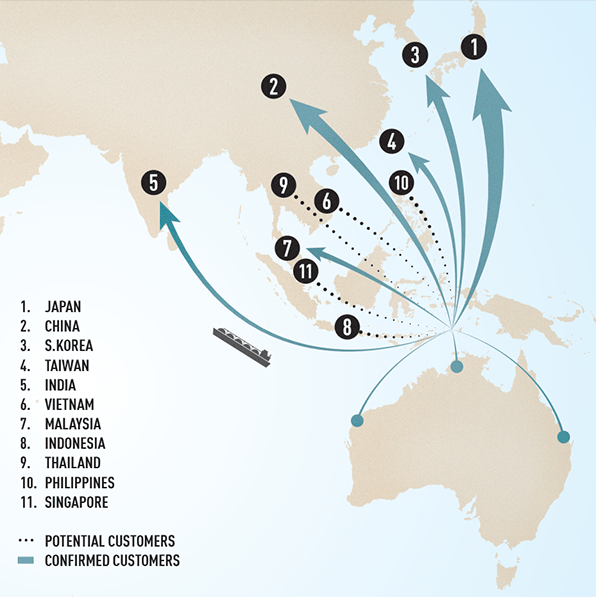 The eastern gas market covers 86 per cent of Australia’s population, and in 2016, LNG exports from eastern Australia represented 43 per cent of the country’s total LNG exports[i].

As Australian exports have increased, the nation’s eastern and southern states have experienced a shortage in gas supply. And since the introduction of LNG projects in Queensland, natural gas prices in the eastern gas market have doubled. 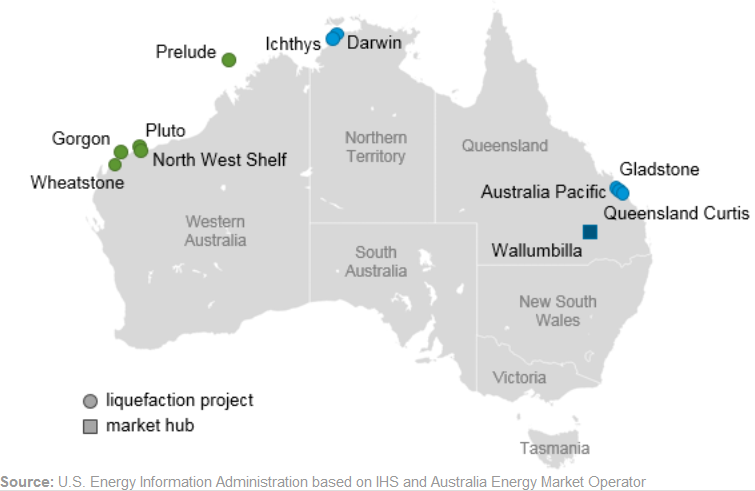 On 1 July 2017, the Australian Domestic Gas Security Mechanism (ADGSM) came into effect. The ADGSM authorises the government to limit LNG exports if companies are exporting more natural gas than they are supplying to the domestic market. It will remain until 1 January 2023.

In October, east coast LNG exporters reached an agreement with the Federal Government to guarantee natural gas supply to domestic customers to cover the estimated supply shortfall. The ‘Australian East Coast Domestic Gas Supply Commitment’ requires east coast LNG exporters to offer sufficient gas to meet the forecast shortfall in 2018 and 2019, to avoid potential restrictions on LNG exports in 2018. The companies also agreed to sell natural gas produced in excess of contract volumes to the domestic market before selling it on global LNG markets.

East coast gas producers also made a commitment to the Federal Government to make gas supply available to electricity generators during peak periods. The ‘Gas Supply Guarantee Mechanism’ was established to deliver these commitments. While the ADGSM is intended to manage the annual domestic energy balance, the Gas Supply Guarantee focusses on short term deliverability and supply issues.

The above security mechanisms have been introduced to control the energy balance and provide more gas supply to the market to reduce gas prices for consumers. However gas is also a fuel for the electricity industry, with gas-powered generators playing an important part in maintaining electricity supply. Higher gas prices feed-in to electricity prices, and in turn, lead to higher consumer costs. Prices in both industries could be reduced if additional sources of supply were developed to increase the level of supply.

One obstacle to developing more supply has been the opposition of some state governments to gas exploration and development. In its September interim report, the Australian Competition and Consumer Commission (ACCC) said “the moratoria and other regulatory restrictions in various states … continue to prevent or impede development of new gas supply and gas producers do not appear to be bringing on new supply fast enough in response to the higher market prices. While a number of projects and initiatives are on foot, these are not expected to impact the situation for 2018[iv]”

Lifting restrictions on exploration may provide the right set of conditions for industry to explore and develop new gas resources.

[i] US Energy Information Administration, October 2017