Do we need a new approach to competition?

The challenge for many regulators of retail electricity markets in Australia and elsewhere has been how to properly assess their competitiveness and efficiency. What is the best way to report and what indicators should be employed in what is by definition an imperfect market?

That’s the task the Victorian Government has handed the Essential Services Commission, which recently released a paper outlining its proposed framework and approach. The new framework stems from one of the recommendations of the 2017 Thwaites Review[i].

The new framework is in addition to the competitive assessments undertaken by Australian Energy Market Commission (AEMC), which has long held this function, and, more recently, the Australian Competition and Consumer Commission (ACCC), which was given an ongoing role to monitor the electricity market and to report to the Federal Government every six months until 31 August 2025. Since price deregulation was introduced, other state regulators have held market monitoring roles, undertaking annual reviews of the performance and competitiveness of the market in their own jurisdiction.

The ESC’s new framework is coming despite the ACCC finding in its Retail Electricity Pricing Inquiry (REPI) that state-specific reporting is costly and unnecessary, and should cease in favour of centralised reporting. Since the REPI was released, IPART has recommended to the NSW Government that they should no longer undertake analysis on the competitiveness of the market.

To assess the competitiveness of markets, most regulators – certainly in Australia – have employed a structure-conduct-performance (SCP) framework. It is broadly accepted by economists as a way to undertake an assessment and considers structural factors like market share and level of market concentration, assess how firms and consumers behave via things indices like retailer product analysis, pricing strategies, marketing approaches, and performance outcomes such as customer engagement and what is being delivered for the customer.

So do we need a new approach given these views and the existing multiple layers of assessment, and what will it add?

The SCP is considered to have some limitations but is most broadly the approached used in the National Electricity Market (NEM). To develop its new approach and framework, the ESC sought the views and insights of economic and competition policy analysts - Frontier Economics, Deloitte Access Economics as well as Professor Catherine Waddams from the UK’s Centre for Competition Policy.

The ESC intends to continue to monitor and report on the market in 2020 with an expanded role in line with the framework and its new approach.

In the paper outlining its framework and approach (shown in figure 1 below), the ESC says it is seeking to address the questions of:

Figure 1: Summary of the ESC Framework and Approach 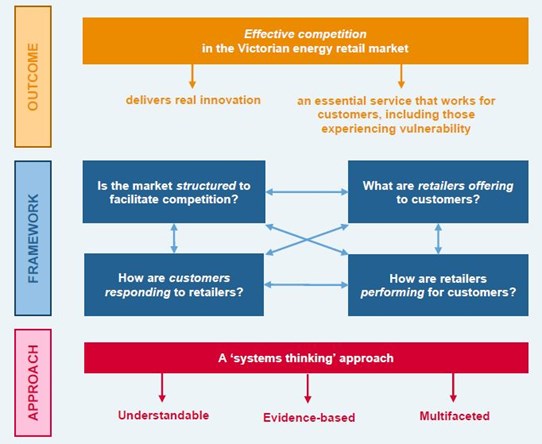 The ESC has stated that it wants its approach to be:

The ESC said its first report based on the framework would focus on two “major symptoms” for why it believes there is a gap between the current market and a “fully effective market”, namely:

It is also likely that these two focus areas would continue to be a focus for its monitoring and reporting in future years. “We are particularly interested in monitoring innovation over time to identify new and emerging energy products or services, and to understand whether the regulatory framework is fostering or hindering innovation in the retail energy market.”

The complexity of what the ESC is attempting is evidenced by the different approaches suggested by the three papers provided by Frontier Economics, Deloitte Access Economics and Professor Waddams.

In its paper, Frontier Economics questions what was trying to be achieved noting that there is some evidence to support the view that while rising energy costs are a problem in terms of household expenses, it is a relatively small problem and this could easily explain any lack of engagement with the market.

It also noted that one feature of the energy market in Australia since 2007/08 has been continual government reviews to determine the causes and to develop policies to address rising prices.

“In all cases these reviews have resulted in more regulation and government intervention in the NEM.” And further noted that “There seems to be no evidence that this greater regulatory intervention has resulted in better economic outcomes.”

Frontier Economics suggested that the ESC could form an index of unit price spreads across the market as a simple indicator of competition and comments: “While an index could be useful it would need to be put in the context of other measures of competitiveness, such as retailer returns, which could be more difficult to measure and require an estimation of wholesale costs, network tariffs and retailer costs.”

Prof Waddams noted that competition is a means to an end rather than an end in itself, and its assessment should be “multifaceted” (which the ESC has flagged as part of its approach) to capture a range of aspects which would be expected in a well-functioning market.

In considering the Victorian market she said that its performance compares favourably with that of other competitive energy markets.

“In particular having only 6 per cent of customers on the Standing Offer after seventeen years of choice… is an impressive figure…. Consumer participation in the Victorian energy market therefore appears to compare well with that in Britain.

“Another favourable factor in the Victorian market is that customers on hardship schemes… are more likely to be paying through market offers than on the more expensive standing offers."

She does note that the variety of tariffs and discounts available make choosing the best tariff a more complicated process than for most British consumers… The moves to standardise offers are welcome insofar as they enable more welfare enhancing choices for consumers, but they may lead to a reduction in choice (welfare) for some consumers”.

Prof Waddams suggested that there should be more of a focus on consumer measures such as search and switching rates and trust and confidence indicators, and efficiency measures, such as the cost of suppliers, and their profit levels. These are broadly the measures proposed by the British regulator Ofgem (Office of Gas and Electricity Markets) with the office expecting to consider a range of indicators, but not committing to a particular balance between them.

Deloitte analysed the performance of the Victorian energy market using the SCP framework and concluded that on many of the indicators it is working well. As a result it had suggested the commission use the SCP framework with additional indicators to improve assessment, such as:

What is clear from the expert analysis, is that attempting to assess competitiveness in a complex market for a homogenous product is fraught. The concern is that the ESC’s attempts to redesign the wheel might deliver them a platform to suggest the market is uncompetitive, merely because it does not like the outcomes they perceive customers are getting from it.

The timing of this review creates additional challenges for a regulator seeking to monitor and report on customer outcomes, and above overall competitiveness.

Retail electricity markets have undergone unprecedented change in the past two years, both driven by government intervention and customer needs. Some of these reforms were clearly needed, but there is little doubt that retailers will take some time to acclimatise to the new normal. The ESC should ensure that any benefits of the recent market changes, which the commission has had a hand in building, are allowed to flow through to consumers before they start seeking to highlight that the market remains “uncompetitive”.

[i] Victoria’s Independent Bipartisan Review of Electricity and Gas Retail Markets was chaired by John Thwaites.