While Australia’s gas industry discuss the LNG supply glut as new Australian and US projects start up, Energy Insider is contemplating a looming behemoth in energy demand. China and South East Asia are expected to see strong economic growth over the long term and coupled with strong population growth, urbanisation and electrification[i] their future energy consumption will dwarf Australia’s energy production.

The 6th edition of the APEC Energy Demand and Supply Outlook (produced by the Asian Pacific Energy Research Centre, APERC) shows that the APEC region makes up the world’s largest share of energy demand (Figure 1) and China is the region’s largest energy consumer after overtaking the USA in 2010 (Figure 2)[ii]. And APERC forecasts that energy demand from China will increase 50 per cent by 2040, from 1,943 Mtoe in 2013 to 2,875 Mtoe in 2040[iii]. The other major growth centre for energy demand is South East Asia which APERC forecasts to increase 110 per cent, from 410 Mtoe in 2013 to around 871 Mtoe in 2040. By comparison, Australia’s energy demand in 2013 was 81 Mtoe.

Despite China’s policies to deploy renewable energy, the scale of the projected rise in energy demand means it is still expected to be largely met by coal, gas and oil. In 2040, APERC forecasts that coal, oil and gas will still make up 56 per cent of total energy supply in China (assuming no policy changes from late 2015). Supply from hydro and other renewables are forecast to grow at annual rates of 2.0 per cent and 3.1 per cent respectively between 2013 and 2040.

By 2040, APERC forecasts a shortage in gas supplied in the APEC region which will create opportunities for increasing exports from Australia (Figure 3).

Rising demand for gas from South East Asia (from 131 Mtoe in 2013 to 286 Mtoe in 2040) and China (from 140 Mtoe in 2013 to 610 Mtoe in 2040) is significant and drives the forecast shortage in gas in the APEC region by 2040[i]. Buildings requiring more electricity and industrial processing are the largest drivers of rising gas demand. In Australia, the strong outlook for gas demand from the South East Asian region and China points to strong demand for Australia’s gas resources (Figure 4). 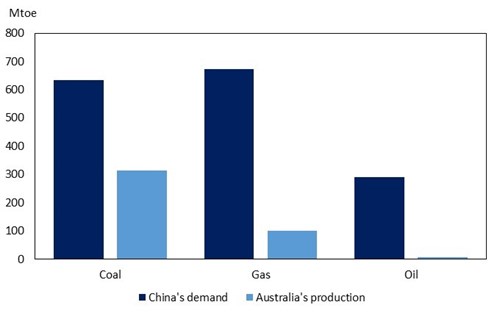 With strong demand for Australia’s gas resources the long term outlook for domestic gas consumers is likely to be of a tight domestic gas supply. Energy Quest analysis of Australia’s existing gas reserves estimates a supply shortage of around 172 PJ (or 4.1 Mtoe[i]) in 2020 and around 205 PJ (or around 4.9 Mtoe) by 2025 due to international demand and expected falling production in the Australia’s southern fields[iv].

Gas can play a key role in assisting the integration of renewable energy to the grid, as a balance to the variability of wind and solar generation. Over a period in which gas fired electricity may be required as a flexible complement to renewable energy, gas may become expensive and difficult to contract.

The IEA's latest electricity market report shows the impact of the COVID-19 pandemic, as well as a rebound in electricity demand in some regions. What may come as a surprise is an anticipated increase in coal-fired generation, which is expected to surpass pre-pandemic levels in Asia Pacific over the next two years.

European Union plans to get “Fit for 55”

The European Commission recently unveiled a suite of new environmental policies under its “Fit for 55” legislative package, which highlights the European Union’s attempt to meet its 55 per cent net emissions reduction target for 2030. The package includes a range of policies but the carbon border adjustment mechanism - or CBAM - has received the most media attention, including within Australia.

Jun 17 2021
Read Analysis
GET IN TOUCH
Do you have a question or comment for AEC?