The International Energy Agency (IEA) has released its latest electricity market report that shows the impact of the COVID-19 pandemic, as well as a rebound in electricity demand this year in some regions. Next year is also expected to see solid growth in demand for electricity in specific regions.

What may come as a surprise is that the report also points to an increase in coal-fired generation, which is expected to surpass pre-pandemic levels in Asia Pacific over the next two years.

That’s one outcome as a result of the scale of demand growth – expected to be up 5 per cent this year and 4 per cent next year, with most of this growth coming from our neighbourhood. The rebound is “very region specific”. China is expected to account for more than half of the demand in the next year, while 9 per cent of global demand is expected to come from India which is now the third biggest consumer of electricity.

Gas-fired generation fell by 2 per cent last year, but is expected to grow 1 per cent this year and by close to 2 per cent next year. The lower growth for gas reflects the fact that it plays a smaller role in Asia Pacific, while it faces greater competition from renewables in both the US, which has a large gas-fired generation fleet, and in Europe.

Recently the IEA released a Net-Zero Emissions by 2050 Scenario which projected that nearly three quarters of the carbon emissions reductions would come from the power sector – this was based on coal-fired generation falling by more than 6 per cent a year with gas picking up some of this and growing 5 per cent. So this latest assessment appears to make that outlook harder to achieve.

In fact, the IEA expects carbon emissions from the electricity sector to increase by 3.5 per cent this year and by a further 2.5 per cent in 2022, which it notes would take them to an all-time high.

From late last year through to the early part of this year the proportion of coal in China’s generation mix rebounded from record lows seen in the earlier part of 2020. Apart from the higher demand, coal generation was helped by the reduced availability of hydro generation because of drier weather. Record amounts of renewables between July and October last year had reduced coal to a record low of 58 per cent in October. Since November it has recovered and in the first four months of 2021 its share of the generation mix had increased to 66.5 per cent which is higher than in the same periods for the preceding two years.

The IEA notes the shift back to coal was not entirely unsurprising because renewables generation is highly seasonal and as a result by May coal’s share had fallen to 61 per cent. The graph below shows the changing share for both coal and renewables in China’s grid. 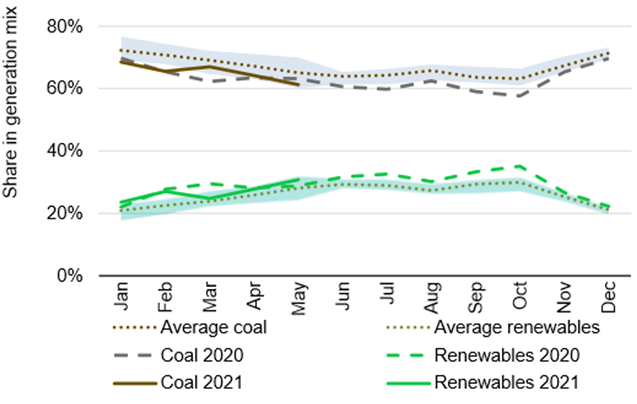 While not as dramatic as China’s demand growth in the first quarter, India still saw electricity demand that was nearly 10 per cent higher than the same period in 2019. While India was hard hit by COVID-19 by mid-April this year, which slowed the demand growth, its electricity demand was still up 7 per cent compared to April 2019. Growth in May was 6 per cent higher compared to the same period pre-pandemic.

Coal’s monthly share of generation in India in early 2021 sat at 79 per cent.  In the past two years, coal and renewables have both increased faster than overall generation and this has been at the expense of nuclear and gas generators.

Europe in contrast saw weather-corrected demand decline gradually from the start of 2021 and in May this year the aggregated weather-adjusted electricity demand for France, Germany, Spain, Italy and the UK was down 3 per cent compared to 2019. The IEA reports that the current trend for European electricity demand is unclear and is far from showing a complete recovery from the impact of the pandemic.

Changes in demand for China, India and Europe are shown in Figure 2 below.

[i] This removes the variability between periods to allow comparison of demand under the same weather conditions to see underlying trends.