Australia’s current political climate on energy and climate policy is riddled with uncertainty. The mention of an emissions intensity scheme, let alone an emissions trading scheme, which would help transform an ageing electricity industry towards the low-carbon future by using a market to price pollution, is politically (and currently) off the table, while the Coalition is advocating for the development of clean coal-fired power.

Meanwhile, back in October 2016, the Senate Environment and Communications Reference Committee (dominated by the Greens and ALP) held an Inquiry into the retirement of coal-fired power stations[i]. In its interim report[ii] it recommended that Australia should move completely away from coal-generated electricity, citing economic factors as the primary drivers. More specifically, the report recommends:

The interim report was backed by both Green and Labor members, however the Liberal members, in a dissenting report, stated that they did not support any of the recommendations of the report and argued that the government is already undertaking a comprehensive set of energy transition policies. [iv]

Australia is not the only country where the phase out of coal has been debated. Two other major economies, Canada and the UK have taken the next step and announced firm plans for a phase-out of coal-fired generation, which are examined below.

Canada: phase out of traditional coal-fired generation by 2030

These amendments aim to provide a big incentive to either build very efficient new gas-fired generation, convert coal-fired boilers to gas, or not to build . It is expected that these policy changes will increase Canada’s percentage of renewable electricity generation from about 80 per cent to about 90 per cent, or about an additional 62,000 GWh per year.[vi]

The question is will this policy to reduce emissions actually work? The World Energy Council Index, ranks countries on their ability to provide sustainable energy through three dimensions: Energy security, Energy equity (accessibility and affordability), Environmental sustainability, with ‘A’ being the highest ranking. [vii] Canada scored 22nd on the World Energy Council index, with a score of AAC. Given the new coal-fired generation policy, impacts on the trilemma might be:

About 80 percent of Canada’s electricity production comes from non-emitting sources.[x] According to the National Energy Board, only about 10 per cent of Canada’s total power capacity was from coal and coke plants.[xi] Figure 1 depicts all Canadian supply by fuel type. 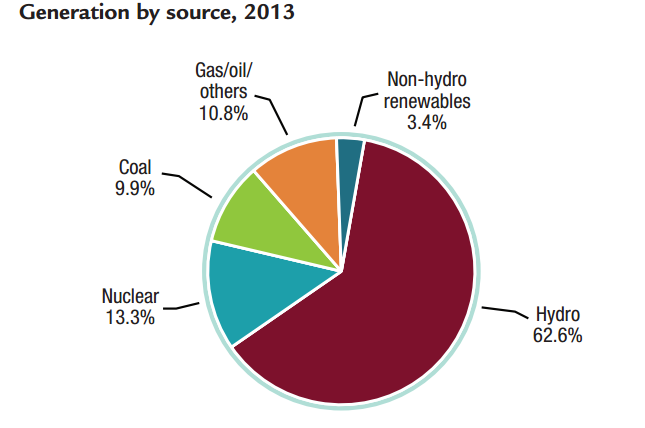 This is comparatively small compared to Australia, where currently, coal-fired generation (both brown and black coal) makes up 78 per cent of electricity generation across the National Electricity Market (NEM).[xiii] Adopting a plan to phase out of coal in an Australian context, would see greater impacts on the trilemma (in particular energy security) due to the high proportion of generation that coal-fired plant provides.

UK: remaining coal-fired power stations to be shut by 2025

In November 2016, the UK government set out proposals for the next steps to phase out electricity generation from unabated coal-fired power stations by 2025.[xiv] The proposal is to incentivise investment in cleaner energy generation. Business and Energy Secretary, Greg Clark, said “Taking unabated coal power out of our energy mix and replacing it with cleaner technology, such as gas, will significantly reduce emissions from the UK’s energy use.”[xv]

Coal-fired power plants provided around a quarter of UK’s electricity in 2015, but the government plans to close these as a part of its efforts to meet climate targets.[xvi] The UK government argued that all UK coal plants, which are 47 years old on average, will need to shut by 2022 anyway as they became uneconomic, in part due to EU environmental rules (though the status of these post-Brexit is uncertain). If market conditions changed, for example if coal prices fell or new nuclear and wind farms were delayed, the UK government some coal plants could conceivably continue until 2030, which would provide certainty for investors. [xvii]

To balance the effect of the loss of coal-fired generation, the government also reaffirmed plans to offer subsidies worth 730 million pounds annually to renewable projects over 15 years, through a contracts for difference system.

Options for coal-fired plants that could allow them to continue to operate beyond 2025 include retrofitting carbon capture and storage (CCS) technology or partial CCS combined with operating constraints to keep their overall emissions down.[xviii] The UK government predicts that it would be highly unlikely for any plant to choose to invest in retrofitting given the age of the existing plants. The same lack of investment for retrofitting could also be the case in Australia for some coal-fired plants, which were commissioned in the 1970s and early 1980s. A second option would force coal plants to reduce their ongoing emissions (without specifying a particular technology) to be as clean as new gas plants.

A report by the Centre for Policy Studies[xix], said Britain was on the verge of an "energy crisis" with electricity demand set to outstrip available supply in the near future. The report argues that Britain will not have enough dispatchable energy generation capacity to cover forecast demand from next year due to the systematic early closure of power plants.

The UK has gas and nuclear to support the removal of coal-fired supply. Unlike Australia, the UK is looking into plans for new nuclear power stations which the governments argues could almost provide a third of UK’s electricity needs.[xx] Furthermore, the electricity supply mix for the UK is vastly different to that of Australia as depicted in Figures 2 & 3. 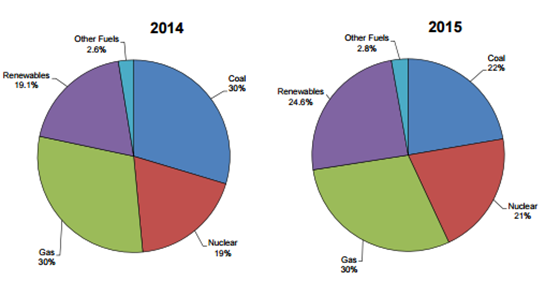 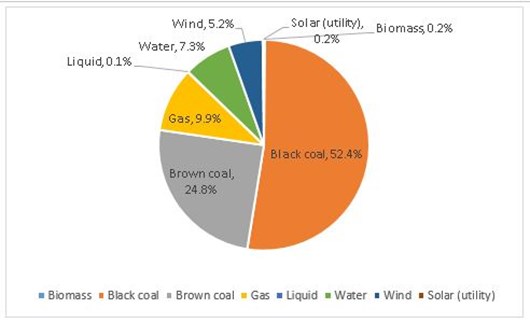 The success of these coal-fired closure plans depends on the current fuel mix, the availability of alternative dispatchable generation, and political agreement on energy/climate policy. Coal-fired generation is approximately 70 per cent in Australia, while it represents 10 per cent of the generation mix in Canada and 20 per cent in the UK. Prior to the UK government's closure announcement several coal-fired closures were already confirmed, which means the UK closure plan will only need to phase out approximately 10 per cent of its generation. If Australia was to adopt the Canadian rate of closure of 0.7 per cent per year, it would take over 100 years for Australia to completely phase out coal-fired generation.

In Australia, the current policy uncertainty, lack of coordination, and unreformed markets is increasing costs, undermining investment and worsening reliability risks of the energy sector.

The Finkel review’s preliminary report on the Future Security of the National Electricity Market, examined the regulatory closure of fossil-fuelled power stations, where a regulatory policy mechanism is used to close fossil-fuelled power stations to achieve an emissions reduction target. The report states that a regulated closure policy ‘had the largest impact on electricity prices’[xxiii]and notes the risk on the system security of the removal of a large power plant within a timeframe that does not allow replacement capacity to be installed. The Finkel review will release its final report in the first half of this year.

Canada and UK have established nuclear plants and options for new nuclear plants post the closure of coal-fired plants. Australia has no plans or support for nuclear, and has community and jurisdiction issues on other dispatchable baseload generation, e.g. gas and biomass. Canada also has plenty of hydro to rely upon, whereas Australia has very little scope to increase its generation from hydro sources. Another difference is Australia has significant coal resources both for domestic use and export.

The upcoming Australian Government’s Climate Change Review in 2017 will examine options to reduce Australia’s carbon emissions, which could include consideration of a regulated closure of coal-fired power stations. Hopefully the review delivers what industry is yearning for, a stable national carbon policy to provide certainty for investment decision.

[v] Government of Canada, The Government of Canada accelerates investments in clean electricity, Office of the Minister of Environment and Climate Change, 21 November 2016. http://news.gc.ca/web/article-en.do?mthd=advSrch&crtr.page=1&crtr.dpt1D=6672&nid=1157989&crtr.tp1D=1

[xix] Centre for Policy Studies, The Great green hangover – How to cut bills and avoid an energy crisis, November 2015, http://www.cps.org.uk/publications/reports/the-great-green-hangover/

[xxiii] Preliminary Report of the Independent Review into the Future Security of the National Electricity Market, Commonwealth of Australia 2016, p. 23, http://www.environment.gov.au/system/files/resources/97a4f50c-24ac-4fe5-b3e5-5f93066543a4/files/independent-review-national-elec-market-prelim.pdf