The energy industry that emerges from the COVID-19 pandemic will be significantly different, the International Energy Agency (IEA) recently warned in its World Energy Investment 2020 report.

Pre-coronavirus expectations of modest investment growth for the power sector in 2020, has now turned into what is expected to be the largest fall on record. Following a small decrease in 2019, the IEA now estimates global power investment to fall by 20 per cent, or $400 billion, this year - its lowest level in over a decade, and a drop it describes as historic.

Based on the latest data, the IEA provides analysis on how energy investment is being reshaped by the economic crisis internationally. Due to COVID-19 mobility restrictions, all parts of the power sector are expected to be affected. Almost all investment activity has faced disruption due to restrictions on the movement of people and goods, machinery and equipment supply, and delays in projects. Larger effects on investment spending will also stem from lower energy demand and prices, with ongoing uncertainty about these in the years ahead.

Despite the headwinds, locally the Clean Energy Regulator (CER) remains upbeat on clean energy investment in Australia this year. Here we look at the IEA’s and CER’s assessments.

The IEA estimates total global power investment to decline by 20 per cent this year, with investment in the power sector to drop by 10 per cent (figures 1, 2). In contrast to the start of the year, pre-coronavirus analysis suggested ongoing capacity expansion with an investment rise of around 2 per cent.

Vulnerabilities vary across different countries and companies depending on whether they are investing in fossil fuels or low-carbon technologies. 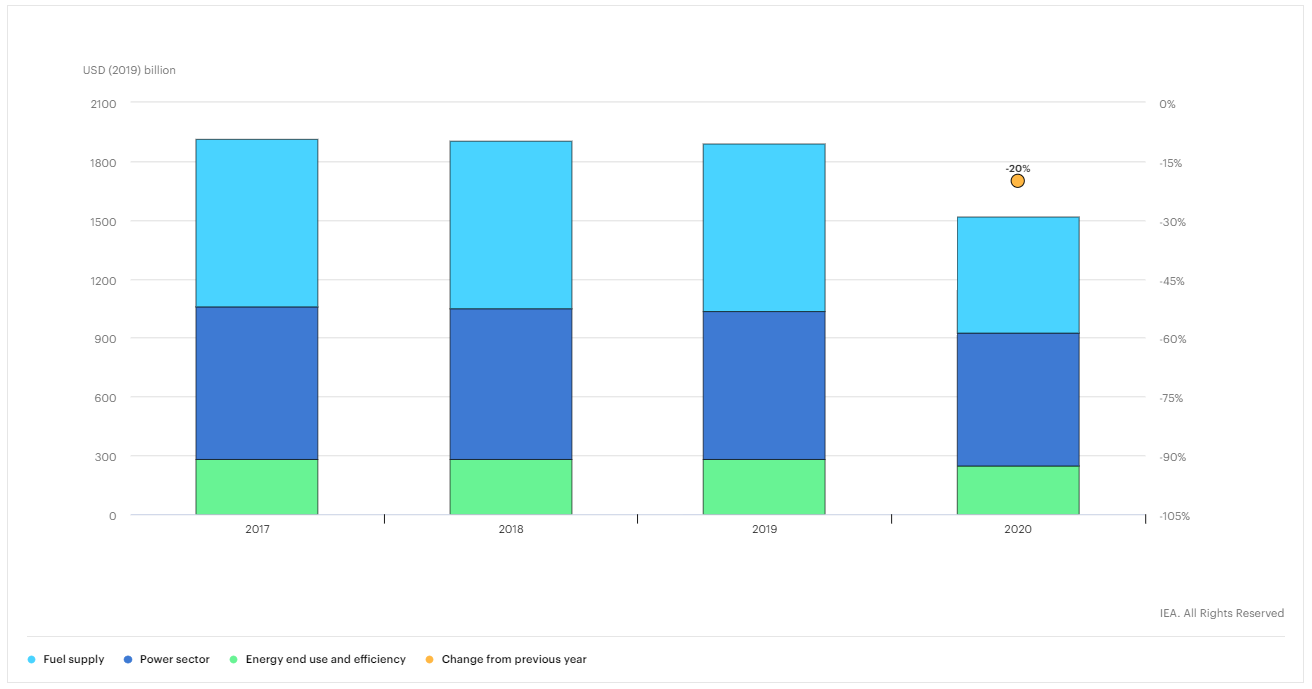 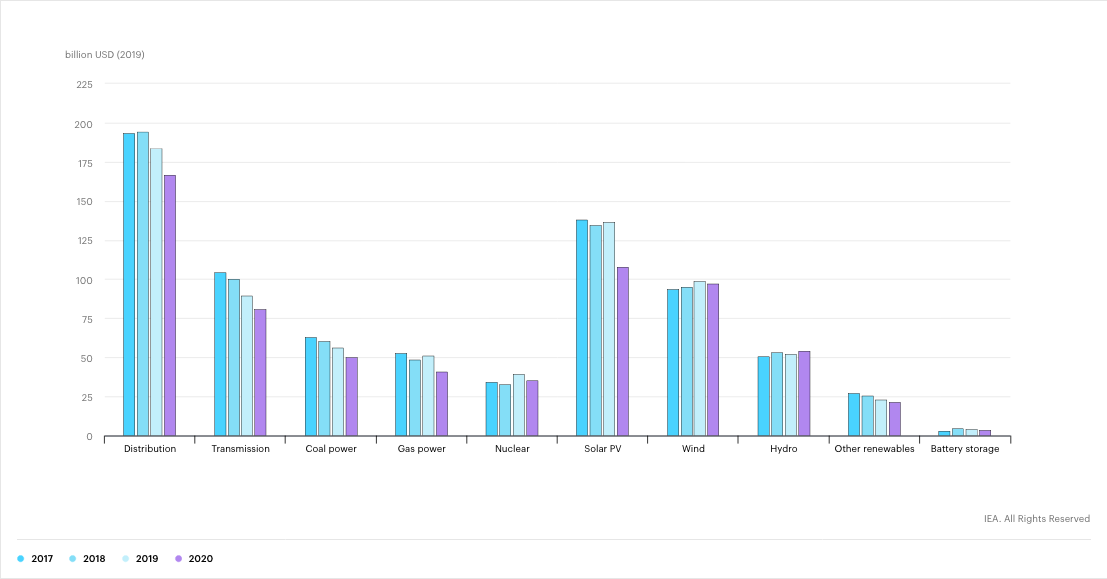 Renewable power overall investment decline of 10 per cent globally (compared to 2019): Renewables have been dispatched at a higher rate due to low operating costs and often priority access to networks. The IEA notes that this, along with long-term contracts, has helped to support revenues. However, investment in new renewable capacity has also been impacted as lockdown restrictions affect production, shipping and construction schedules, as well as shifting demand.

Distributed PV has been “hit hard” as residential installations face the greatest disruption due to the restrictions, and early impacts on solar PV module manufacturing as restrictions were initially enforced.

Globally while the effect on utility-scale wind and solar PV projects is lower than the IEA predicts for small scale solar, final investment for utility-scale solar and wind is still impacted, with Q1 2020 declining to Q1 2017 levels (figure 4). Around 20 European wind turbine facilities stopped operating in March (mostly in Spain and Italy) with Indian factories also ceasing production. A longer duration of these disruptions, or if delays spread to other regions like Southeast Asia, will continue to slow the progress of renewables by further delaying global projects.

Offshore wind and hydropower are expected to see a rise investment due to the technology’s longer-lead times. This is supported by continuing projects around the world, and the completion of two hydro projects in China, however the IEA notes that risks of delays in some regions remain.

Renewables in Australia - A contrast: In contrast to what the IEA is seeing internationally, the CER’s most recent Quarterly Carbon Market Report shows that Australia’s small-scale solar PV capacity installed in the first quarter of 2020 was up 33 per cent (compared to the previous corresponding period last year).

The CER notes that while it is too early to know the full impact of COVID-19, system orders remained strong through to May. Many in the industry expected a drop in new system demand because of factors such as increasing unemployment, however overall, the size of any downturn has been muted.

The CER also notes that, in terms of supply chain issues, initial industry analysis shows Australian solar businesses have been relatively insulated from the economic shock due to long order books and solid inventory in Australia. The production of key components from China is also rapidly returning to 100 per cent. 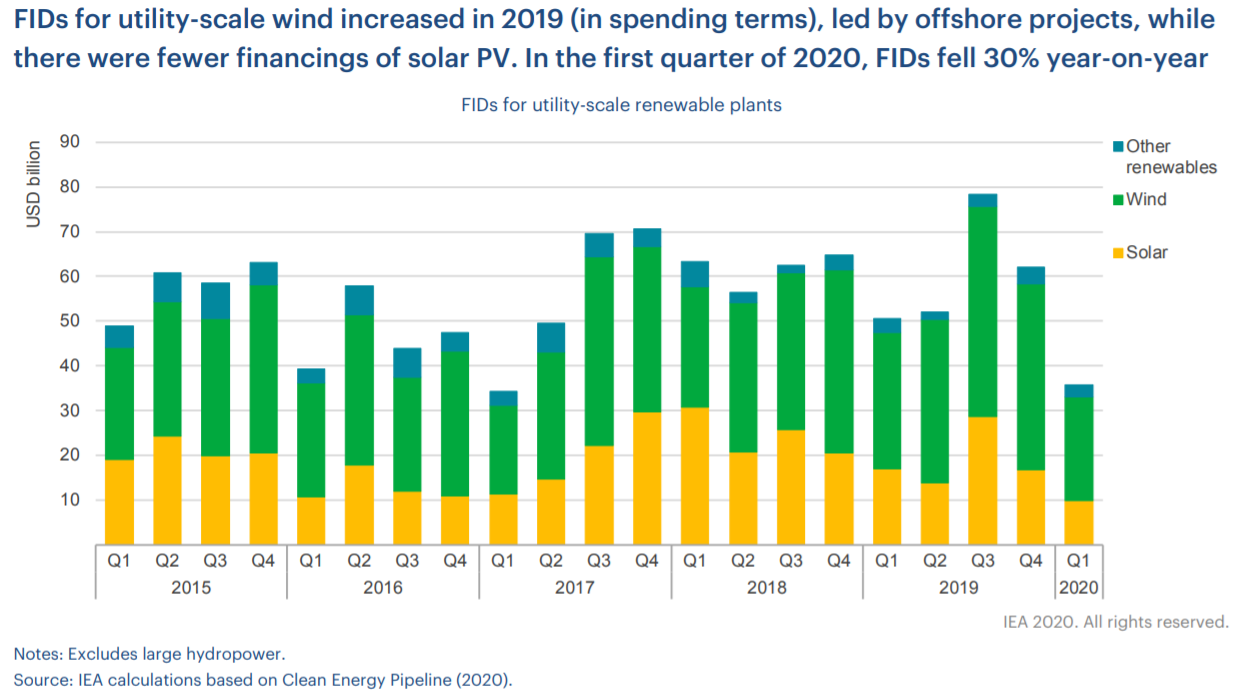 Networks: Overall expected investment decline of 9 per cent (compared to 2019): Grid investment, which has already been declining in several countries, is expected to drop around 9 per cent in 2020. Developing countries will be mainly impacted, where most of the investment in networks is financed by state-owned utilities that were in already in a weak financial position pre-coronavirus. However, the IEA notes that grid spending falls less than generation, driven by ongoing upgrades in nations such as the United States and Europe, to support resiliency and reliability and new support in China.

While the sector is expected to experience major global declines, some optimism remains, mainly driven by activity in China which may help to slow further reductions in 2020.

In relative terms, investment in China is anticipated to be less affected than in other regions: Lockdowns were generally lifted by April and industrial production restarted. And while energy investment in China has already been stifled by the disruption to investment activity and supply chains, the country is looking at the revision in State Grid’s investment plan for 2020 and a slight year-on-year increase in investment of major power companies in Q1. Renewables continue to account for the largest share of investment and declines less than other regions. While there remains optimism due to the future spending plans by some large utilities, this investment is expected to fall-short to offset the risks and uncertainties in several global markets.

Expectations for a strong year for renewables in Europe and the United States have been reversed due to recession. Several major utilities in these two markets have remained optimistic and have continued their spending plans for 2020, yet uncertainties remain with spending in the power sector now expected to decline this year. At the same time, it is likely that signs of economic stress will be seen more in the second half of the year.

The report predicts that regions that rely heavily on public funding are likely to see “deep cuts” in spending (such as India, countries in Africa, Southeast Asia). Across the globe, smaller companies with weaker financial positions and tighter margins are likely to be more affected, as delays and higher logistic costs hurt revenues. Larger companies may weather the storm with cost-cutting, but this raises questions over research budgets and how this will impact future technology developments.

According to the IEA, with the major fall in demand and uncertainty about how long it will last, a cut in new investment is a natural and necessary market response - but it also flags a risk that the current cutbacks could lead to future market imbalances and volatility.

The agency says that government policies, which have always played a key part in global power investment, will not play a more crucial role in smoothing the economic impact of coronavirus - but the full implications of the pandemic have not yet been realised. It is not yet known what a post‑coronavirus energy industry will look like: its recovery, financial strength, and appetite for risk.

Sector impacts will depend on the duration of the disruptions and the shape of the recovery, as well as the economic factors that drive investment trends, i.e. if oil prices remain low, and how quickly costs for some key clean energy technologies continue to come down. Additionally, it is not known if the pandemic will reset community views on mobility, tourism, or working from home.