Last week the UK reported that it had run its grid for 90 hours and 45 minutes (or more than three and a half days) without any electricity from coal-fired generation. It is the longest period that the UK grid has operated without coal in the generation mix - in 2012 coal had met more than 40 per cent of the UK’s electricity needs.

Thomas Edison opened the UK’s first coal power station at Holborn, London, in 1882, but 135 years on the signs emerged that it had hit a tipping point in the decline of coal-fired generation[i]. It was reported that on 21 April 2017 no coal sourced electricity was generated for a 24-hour period. Since then the amount of time that UK homes, business and industry have not been powered by coal plants has continued to grow as more renewables and gas have come into the grid and coal plants have retired.

This drop in coal-fired generation has been most recently driven by a UK Government initiative to have all coal plants closed by 2025 – today there are seven still in operation. Figure 1 below shows the operational plants as well as the coal plants that have closed or been converted to biomass since the Large Combustion Plant Directive (LCPD). The LCPD was a European Union directive issued in October 2001 which required EU member states to legislate to limit flue gas emissions from combustion plant that was 50MW or bigger.

Source: Power Stations of the UK

The directive had a 2007 deadline for plants that did not comply with the strict emission limits to opt-out, whereby they could operate for a further 20,000 hours until 2015 when they had to close.

For the UK power sector, the government also introduced a Carbon Price Support (CPS) in 2013 to supplement the European carbon price (which is currently hovering around 20 Euros or AUD 32). The CPS required UK power generators to pay a minimum carbon price, which is referred to as the Carbon Price Floor (CPF). In 2015 the CPF went from GBP 9.55 per tonne of carbon to GBP 18.08 (AUD 33) and it was subsequently frozen at this amount till 2021[ii]. As a result of the higher CPF many of the UK’s coal plants became uneconomic to operate[iii].

The UK is not alone in seeing the amount of coal generation falling. The IEA has reports that for the first time, gas-fired generation overtook coal as the major source of electricity in the OECD in 2018. 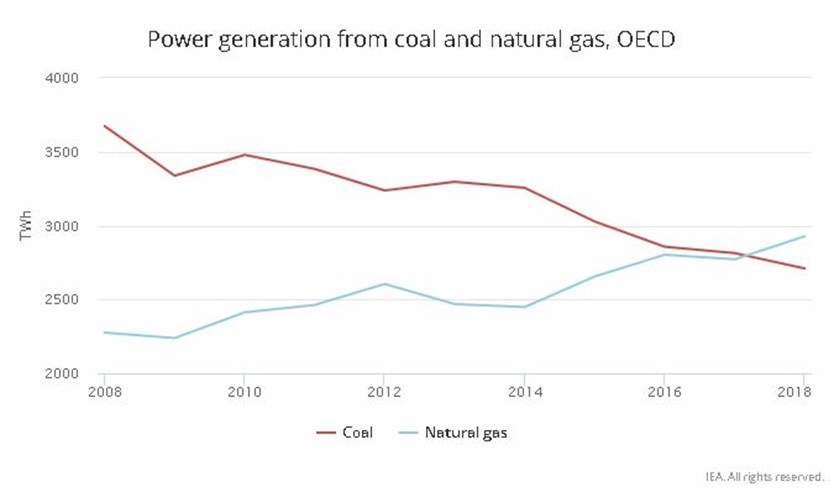 Generation from gas plants has grown strongly in the US, which reflects the increased availability of the fuel as a result of the development of shale gas as well as increased capacity, particularly combined cycle gas turbine plants. The US Energy Information Administration notes the amount of combined cycle gas turbine power plant capacity has been steadily growing and in 2018 surpassed coal-fired plants in over capacity. There were 264GW of CCGT plant and 243GW of coal-fired generators. CCGT plants account for about half of all gas generation in the US but last year provided nearly 90 per cent of all gas-fired electricity to the grid[iv]. 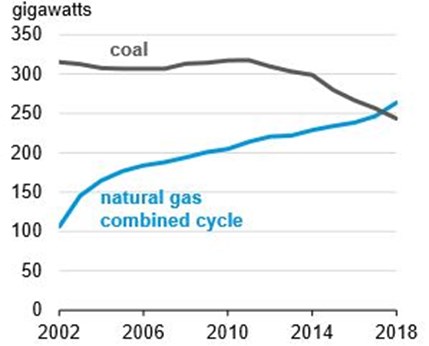 In Europe, meanwhile renewable generation is growing quickly on the back of policy measures to decarbonise.

[iii] Power Stations of the UK

The IEA's World Energy Outlook 2021 report is a crystal ball look at emerging trends and their potential impact on how energy systems evolve. While most of the focus is on the total share of energy markets by generation and fuel type, the report also carries insights into emerging energy security risks as the world moves to lower emissions grids - which it notes could be on a “bumpy” road.