Coal vs 100% renewables: The wrong debate?

A new report released this week tackles the question of “what next?” following the retirement of the National Electricity Market’s (NEM) existing coal-fired power stations. And it has a simple message: those arguing for a continuation of coal-fired generation are wrong and those mounting the case for 100 per cent renewables are also wrong.

Rather than the extremes in the climate and energy debate, the Grattan Institute report ‘Go for net zero’ concludes a net zero emissions target is the appropriate target for policy makers and is consistent with the position of major parties and State and Territory Governments. It also highlights the ongoing need for a coordinated approach rather than a go-it alone attitude by governments, which is unlikely to result in the lowest cost approach for households and businesses in achieving lower emissions.

The report finds that as existing coal-fired plants retire Australia can move to higher levels of renewables with little risk to reliability or energy affordability. We summarise the key findings below.

In assessing each scenario Grattan developed its own economic model (an outline of the approach is shown at the end of this summary). Crucially, Grattan doesn’t provide a specific date at which the 30 per cent, 70 per cent, or 90 per cent happen and doesn’t engage with transition costs. The work effectively assumes all existing equipment has reached the end of its life before the modelling starts, so it can assess the three scenarios as if we were building a new generation sector from scratch. This is a critical assumption, because with many coal plants having several decades of technical life remaining, it implies a much slower transition than many are seeking.

The modelling found that the keep coal and 70 per cent scenarios were closest in cost, while the 90 per cent scenario was somewhat higher in cost it does, unsurprisingly, deliver the lowest emissions. But overall, the report highlights that allowing coal plants to close at the end of their technical lives will reduce emissions dramatically and at a lower cost than what the Federal Government currently pays under its successful Climate Solutions Fund:

“moving to a mostly-renewable system offers a large quantity of very low-cost abatement: 70Mt fewer emissions per year than the coal-based system, at a cost of less than $7 per tonne of emissions saved. This is less than half what the Federal Government pays for emissions reduction via the Climate Solutions Fund.”

The generation mix in each scenario is shown in figure 1 below: 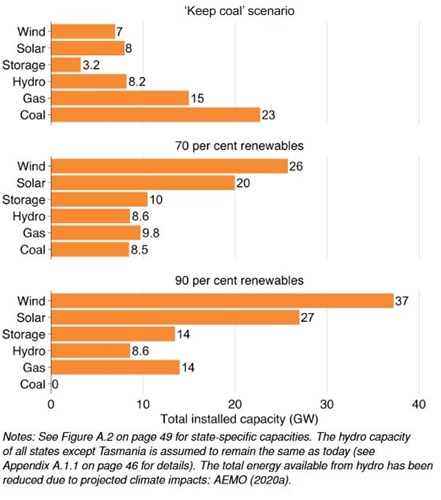 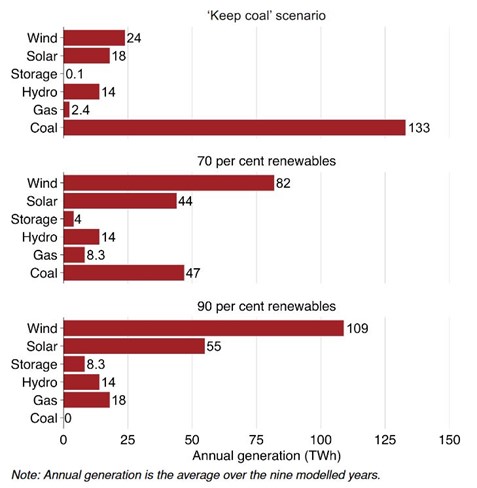 Battery storage is expected to play an important role in helping balance the system, while gas plays a “critical, but not expanded” role in supporting the transition and balancing the system.  Gas is seen as the lowest cost backup until zero emissions alternatives become economically viable. The modelling has studied extended periods of low renewable energy, and concluded that gas-fired generation remains clearly the economic way to keep the lights on when storages run empty. This likely remains the case even if that gas-fired generation has to purchase offsets to abate its carbon emissions. Thus “net-zero” is an equally clean, but much more sensible, goal than “absolute-zero”.

As the level of renewables in the system increases the report sees the value of inter-regional transmission and an interconnected NEM increasing. The analysis tested two interstate transmission scenarios and did not consider alternative combinations or seek to evaluate individual projects. The table below shows the simplified interconnector representations and capacities used by the modelling. 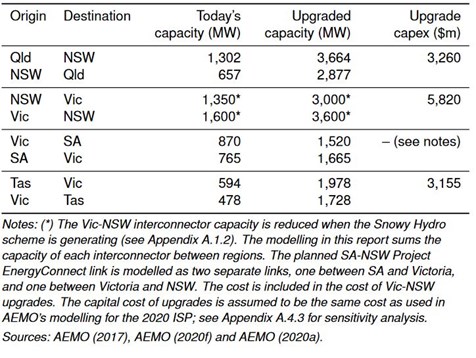 The report lands in favour of a much more interconnected NEM in the high renewables scenarios to take advantage of weather diversity. Whilst that has intuitive attractions, it of course comes at a cost. Deep transmission is not essential for any of these scenarios: reliability could equally arise through overbuilt renewables, and more use of localised storage and gas-fired peaking plants.  In the end this question of deep transmission versus local reliability is an economic choice, and it would be dangerous to rely on simplified modelling of such complex technical and economic issues.

In that regard, it will remain critical that all individual transmission projects are justified based on a robust assessment of the cost-benefits, which is what the current Regulatory Investment Test for Transmission (RIT-T) is designed to achieve. The downside risk of not doing this is that it could actively discourage market-based investors in backup capacity from committing to the development of assets.

While overall the modelling (as with any modelling) has its limitations, the Grattan report is a useful contribution to the debate on how Australia shifts to a lower emissions grid. It also cuts through the arguments at the extremes of the climate and energy debate - the need for coal-fired generation beyond the current expected operating life, and at the other extreme the push for 100 per cent renewables and absolute zero emissions from the electricity sector. As with most things the best approach is somewhere in between. Net zero emissions, as the report concludes, is an appropriate goal that can ensure system reliability at low cost, while reducing emissions. 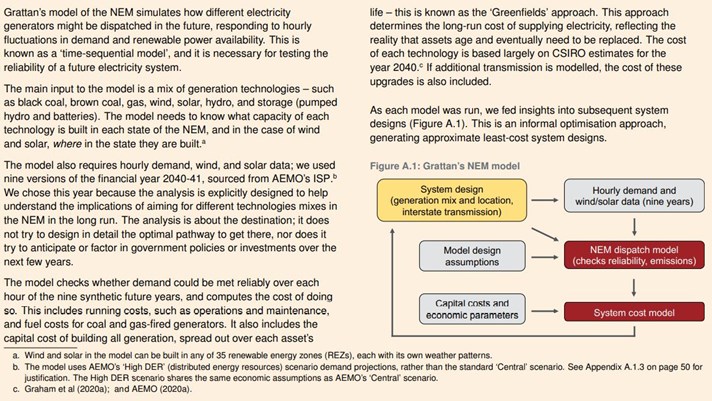