The Stranded Assets Programme was established in 2012 by the University of Oxford’s Smith School of Business and the Environment. The latest analysis, Stranded Assets and Thermal Coal: An Analysis of Environment-related Risk Exposure was released on Thursday January 28. The primary focus of the study is to research how environment-related risks may strand coal assets. The assets focused on in the report are coal fired generation, coal mines and coal processing technologies.

The top 100 coal fired generation companies are analysed around the world. The top 6 utilities all have individually larger generation capacity than all of Australia. AGL Energy is the only Australian company to rank on the list, ranking 42nd in the world. The majority of the list is made up of Chinese, US and Indonesian companies. 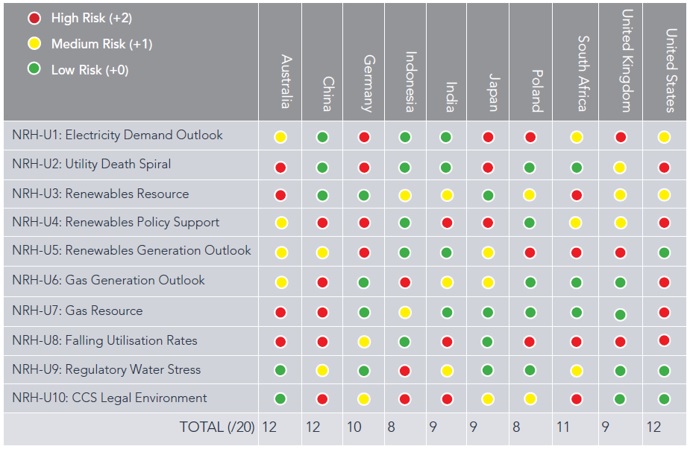 The usefulness of this assessment may be summed up by the fact that Australia (12) scores higher risk than the UK (9) where the Conservative government recently announced the phase out of all coal-fired power by 2025.

The report has up to date information on policy decisions in each country.

In 2008-09, Australia’s electricity generation peaked at 230 GWh. Each subsequent year generation has decreased.

The implementation of the carbon tax in 2012, followed by its repeal in 2014, led to a windfall profit for existing renewable energy participating in the wholesale market. Tasmania’s exports to Victoria during the final year of the carbon tax increased dramatically compared to previous years. In 2010-11 Tasmania exported 1,315 GWh to Victoria, in 2012-13 this increased to 2,293 GWh. The reduction in brown coal over this period was a direct result of the increased market share of hydro during the carbon tax period. Figure 1 shows the annual change in generation by selected fuel types from 2006-07 to 2014-15.

Figure 1: Annual change in generation by selected fuel type across the NEM 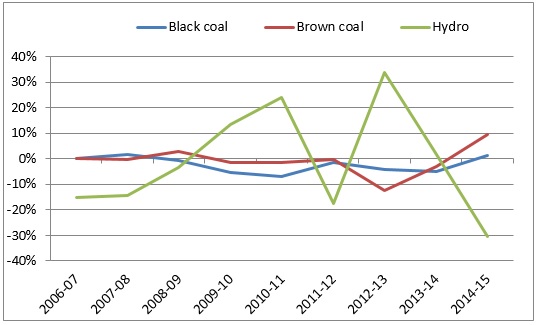 Brown coal and black coal generation have increased 10 per cent and 1 per cent respectively in 2014-15.

Australia exported 325 per cent more coal than it consumed in 2014. According to the Oxford University, this places Australian mining companies at a high risk of losing market share if energy demand declines. This is not a definitive outcome, as the quality of coal imported may become a larger factor in the decision making process for importing countries. China has already banned high ash and high sulphur coal imports in 2015. As countries look to reduce emissions through higher efficiency coal generation, it’s been argued that Australia’s high quality coal could become more sought after even as demand declines. Table 2 shows the risk that has been allocated to each country.