Coal, but not forgotten

Recently the US Energy Information Administration published an article highlighting the 41,000MW of coal-fired plant planned for the Middle East over the next decade[i]. What is on the drawing board? We take a look.

The article reported that 41,000MW of coal-fired plant was planned to be built, based on announced projects and projects currently seeking permits, with another 3,000MW currently under construction. The following graph summarised the position. 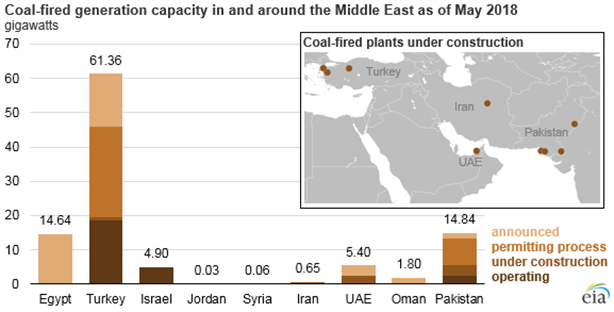 In the United Arab Emirates (UAE), the new coal-fired capacity will come from the Hassyan Project.  This project consists of 3,600MW of ultra-supercritical generation, of which 2,400MW (four 600MW units) is currently under construction and expected to become operational between 2020 and 2022.  Another 1,200MW has been announced, and is expected to come online in 2023.  The US$2.5b (A$3.3b) project is backed by a 25 year power purchase agreement with the Dubai Electricity & Water Authority (DEWA)[ii].  The joint venture building the plant, ACWA Power (49 per cent) and DEWA (51 per cent)[iii], bid a Levelised Cost of Electricity (LCOE) of US$4.241 cents per kilowatt, based on May 2015 coal prices.  This equates to about A$59/MWh, based on 95 per cent availability factor (but still using May 2015 coal prices).  Since 2015 global coal prices have increased by approximately 50 per cent[iv], so the LCOE is likely to be higher now.

The UAE produces almost all its 110TWh of power output from natural gas and oil.  The building of coal-fired plant is part of the country’s Clean Energy Strategy 2050, which aims to diversify sources of power generation to incorporate 44 per cent clean energy, 38 per cent gas, 12 per cent coal and 6 per cent nuclear across the UAE by 2050[v].

In 2016 Turkey’s government announced an ambitious development strategy known as Vision 2023, with the primary goal of making Turkey one of the world’s ten biggest economies by 2023, coinciding with the Turkish Republic’s 100th anniversary[viii].  Turkey currently produces 72.1TWh (27.8 per cent) of its gross electricity production from hard coal (15.2 per cent) and lignite (12.5 per cent)[ix].  Of the remainder, 38.6 per cent was provided by natural gas, 25.8 per cent by hydropower, 0.8 per cent by oil and the remaining 7.0 per cent from waste, wind, geothermal and other renewable energy sources, including an insignificant quantity from solar.  Turkey has plans to reduce its dependence on energy imports and, to this end, it plans on building 90 coal-fired power stations with total output of 18,500MW by 2023[x] – although there are also reports that Turkey will transform its outdated coal-fired power plants “through the latest ecological-friendly technologies … to minimise their negative impacts on public health and nature”[xi].  The bidders will develop coal mines with proven reserves, build the power plants, and operate them for 30 years with special incentive prices guaranteed to be considerably higher than the spot market price[xii].

According to the World Bank[xiii], Pakistan faces massive electricity shortages.  Since 2006, nation-wide power shortages have been steadily increasing each year and have risen to 26 per cent of total demand, or 29TWh in 2013.  To address supply shortfalls, utilities implement rolling blackouts that can last 6-14 hours each day.  In summer, load shedding of 8-10 hours per day is typical, but this can reach 18-20 in remote areas.  More recent reports suggest that some of these problems have been addressed, and rolling blackouts are now only 3-4 hours per day[xiv].

To address these problems, Pakistan is constructing 9,000MW of new generation, much of which will come from private coal-fired plants built by Chinese firms as part of a $38bn investment in the power sector under a joint development scheme called the China-Pakistan Economic Corridor[xv].  Of this new generation, approximately 5,800MW is expected to be completed this year[xvi].  It will be fuelled both by imported coal and by coal mines in Pakistan’s Thar Desert[xvii].

It is interesting to note the proliferation of coal-fired generation projects being built in the Middle East, but the situation is not directly transferable to Australia.  Here we have higher labour and fuel costs, and perhaps more stringent environmental obligations.  It is important that incorrect conclusions are not drawn from limited pieces of data.