Climate and energy policy and the art of the possible

While the dust is beginning to settle after the drawn out Federal election, one area that remains unclear is what direction national climate and energy policy reform may take.

Following the 2 July vote, the Coalition now holds a majority of 76 seats in the 150 seat House of Representatives, with a recount underway for the Queensland seat of Herbert (on the initial count the ALP led by 8 votes). The Senate results are yet to be finalised.

With the Government’s majority established, the Hon Josh Frydenberg MP was appointed as Minister for the Environment and Energy in a move that was welcomed, particularly as it recognises the important link between the energy sector and climate change policy.  This new portfolio brings together important policies such as the Renewable Energy Target, the Emissions Reduction Fund and its safeguard mechanism and the National Energy Productivity Plan, as well as various bodies.

The appointment comes at a time when there is a strong focus on the integration of renewable generation into the National Electricity Market, state-based renewable energy targets and gas supply, among many issues. Renewable integration in particular has been brought into sharp focus as a result of the surge in South Australia’s wholesale electricity prices and the challenges posed by that state’s energy mix.

Given this dramatic backdrop, last week the Australian Energy Market Commission announced a new review - The System Security Market Frameworks Review. This review will look into the wholesale energy market frameworks to assess “if they are suitable to complement increasing volumes of renewable energy and to maintain power system security as the industry transforms”. For Minister Frydenberg, SA is an example of why there is a need to ensure stability as more renewable energy generation comes online. The Minister sees the Council of Australian Governments (COAG) as the most appropriate forum to consider the issues and has made scheduling a meeting of the COAG Energy Council a top priority.

Reflecting the closeness of the election and, as a result, the delay in forming a government and appointing a minister, the Climate Change Authority has declared that there is no longer time for meaningful consultation on its Special Review paper on policies to reduce emission from the electricity sector. It has announced that it will now release its electricity paper and the third report of its Special Review by the end of August this year [i].

Regardless of these reviews and assessments, challenges will come from the political arena as well. What is clear from the election outcome is that the Coalition will need to work closely with the minor parties (or agree a way forward with Labor) to progress key policy changes to decarbonize Australia’s economy. Figure 1 shows the preliminary results for seats in the House of Representatives, by party. Results for the Senate are not yet available from the Australian Electoral Commission.

Figure 1 Election results for seats in the House of Representatives, as at 21 July 2016 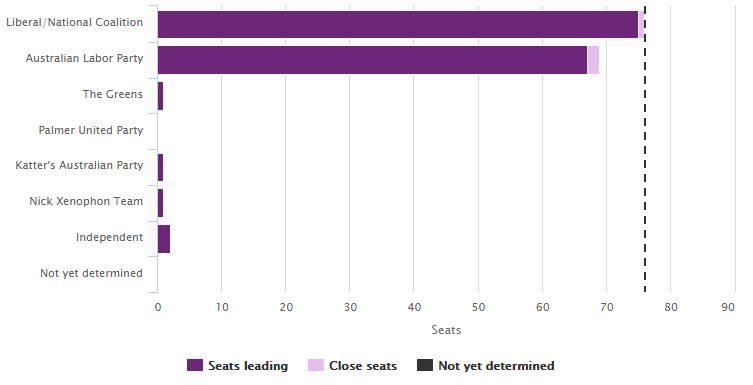 In addition to holding a majority of seats in the House of Representatives, the Government must also provide a Speaker.  The Speaker can be from the crossbench (or indeed the opposition), but at this time no crossbench MPs have indicated that they would be prepared to consider this option. This is understandable given the Speaker does not participate in debates and is expected to remain above the political fray – Independents would normally prefer to be representing their constituents’ interests on the floor of the House.  At this time the Speaker in the last term of Parliament, the Hon Tony Smith MP, looks to be the most likely candidate to be Speaker in this term.  A Speaker normally will only vote in exceptional circumstances – usually to break a deadlock.

Numbers in this House of Representatives are so tight that a death or an illness, or some other unforeseen absence from the Parliament can alter the outcome of a vote, or indeed the Government’s ability to hold Government.  A by-election in any of the more close-run Coalition seats would be highly undesirable, but would be unavoidable should an MP pass away unexpectedly, or decide to leave the Parliament for other reasons.

This also underscores how valuable the seat of Herbert is to the Coalition.  If it can win Herbert on the recount (and with the margin so slim this is definitely possible), then it holds 77 seats in the House, enabling it to appoint the Speaker and still hold a majority (assuming MPs don’t cross the floor to vote across party lines).

The Coalition now has have a very slim margin when it comes to progressing policy change through the House of Representatives and the support of an independent or other parties could be required. Equally, it will certainly need either Labor party or crossbench support in the Senate to pass legislation – of 76 Senators the Coalition is likely to end up with around 30. For that reason it is worth comparing the policy positions that were taken to the voters.

The Coalition
Coalition policy is supportive of reducing emissions through the Emissions Reduction Fund without a price on carbon, implementing the National Energy Productivity Plan and supporting research and projects through the Clean Energy Innovation Fund.

The Greens
The Greens propose a more ambitious plan, and campaigned on a platform that included a target of at least 90 per cent renewables by 2030, a price on carbon, direct investment by government and a pollution intensity standard[iii]. All of these measures underpin a goal of net zero pollution by 2040. It might be considered a belt, braces and another belt approach to carbon policy. With Adam Bandt retaining the seat of Melbourne and up to six Greens Senators likely, the Greens could be an avenue to pass legislation through the Senate.

NXT
Rebecca Sharkie (from Nick Xenophon’s Team, NXT) has not indicated if she would support any Coalition bills. However, Nick Xenophon supports the carbon reduction scheme developed by Frontier Economics in 2009 and does not support Labor’s plan. NXT does support a 50 per cent renewable (electricity only) target by 2030[iv]. The party also supports government policies to facilitate innovation through research, education and manufacturing of new technologies. However, the NXT Party also want to limit electricity price increases to CPI.

Independents
Independent Cathy McGowan has indicated that she will support Supply Bills through the House. She has expressed support for market mechanisms to price carbon to reduce emissions, research into energy efficient technologies, renewable energy and carbon sequestration[v].

Independent Andrew Wilkie has indicated that he is not prepared to ‘do any deals’ with the Coalition. Wilkie supports phasing out coal and gas fired power stations and a shift to 100 per cent renewable energy by 2030[vi]. Wilkie also supports zero net carbon emissions by 2030. In other words, he has managed to out-green the Greens.

Katter’s Australia Party
Bob Katter agrees that global emissions should be constrained to some degree. Katter’s Australia Party (KAP) supports policies that are more regionally focused, in preference to more general national schemes. His party also supports the prevention of coal seam gas extraction close to aquifers and the extension of the Renewable Energy Target. KAP supports maximising Australia’s competitive advantage in the provision of fossil fuels to meet the ongoing global demand[vii]. It is not clear how all of these goals could be reconciled.

One Nation
The One Nation Party, which is likely to win at least three Senate seats, does not support either a price on emissions, or Australia’s participation in global agreements to reduce emissions. One Nation also wants to abolish the Renewable Energy Target and supports practical research into energy efficiency, reliability and dependability among other things[viii].

Justice Party
Relevant to the Senate, Derryn Hinch’s Justice Party has not stated its stance on climate change or renewable policy.

Throughout the upcoming term of Government it will be necessary to prosecute a strong case for a nationally consistent, long-term approach to decarbonize Australia’s economy and win support in the Federal Parliament.