Carbon schemes around the world

It was recently reported that China will launch a national emissions trading scheme (ETS) by the end of 2017[i]. The nation has experimented with several schemes since 2013, with varying levels of success, and by the end of the year will join other major economies by introducing a national ETS.

By the end of 2017, the world’s ETS programs will regulate more than seven billion tons of greenhouse emissions, with 19 systems operating across the globe. They will operate in economies that generate almost half of the world’s gross domestic product and cover more than 15 per cent of global emissions[ii].

We take a look at the energy policies of some of the world’s biggest emitters. 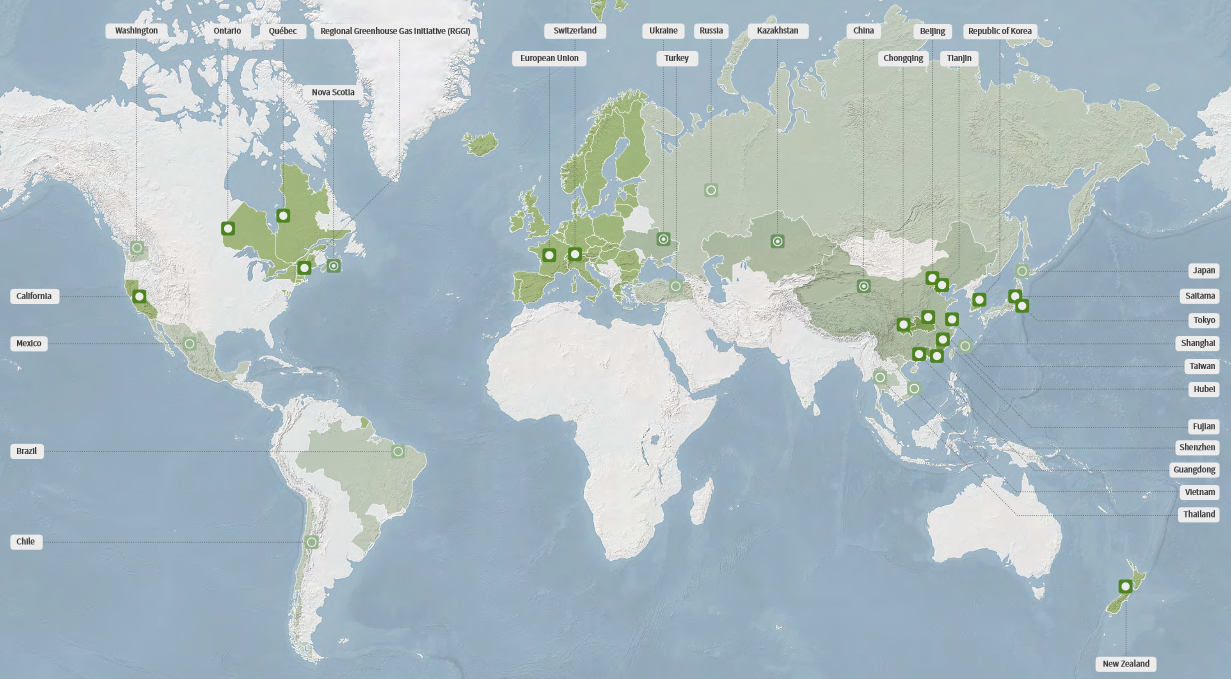 Some policy options to achieve reduced emissions from electricity include but are not limited to:

These policy mechanisms all aim to do the same thing using different regulations or market forces, and allow different energy providers to compete to ‘abate’ their emissions in the most efficient and cost-effective way.

In general terms the more market based the policy, the more cost efficient the end result will be. Market based schemes are far more efficient than traditional ‘command and control’ regulation because market forces enable polluters to find the cheapest way to reduce or off-set emissions.

The European Union (EU) has an EU wide emissions policy and, until the implementation of the Chinese national ETS, is the largest emissions market in the world covering 31 countries (28 EU countries plus Iceland, Liechtenstein and Norway).

The ETS covers over 11,000 stationary sources of emissions, namely power stations and large scale manufacturing and air travel between the countries. The scheme currently covers 45 per cent of the EU’s greenhouse emissions.

Through a cap and trade scheme, the total amount of greenhouse gas emissions from the sources covered by the EU emissions trading scheme is capped at certain amount. The EU aims to reduce this total by 20 per cent of greenhouse gas emissions by 2020, at least 40 per cent by 2030, and 80-95 per cent by 2050, when compared to the region’s 1990 levels[iii]. Within this cap, participants in the scheme can buy and sell permits as they wish. The allowances to emit act like a currency within the scheme and their limited amount give them a value.

New Zealand has a national ETS (NZ ETS) that requires all sectors of New Zealand’s economy to report on their emissions and, with the exception of pastoral agriculture, to purchase and surrender emissions units to the Government for those emissions. Just over half of New Zealand’s greenhouse gas emissions are covered by NZ ETS surrender obligations[iv]. The scheme also enables sectors that decrease emissions, such as planting trees, to sell credits to emitters.

The eligible emissions unit is the New Zealand Unit (NZU). A unit equals one metric tonne of carbon dioxide, or the carbon dioxide equivalent of any other greenhouse gas. A schematic of how the scheme is administered is shown in Figure 3.

Source: NZ Ministry for the Environment

The United States does not have a national ETS, but it does have two regional schemes.

The Regional Greenhouse Gas Initiative (RGGI) commenced in 2009 and is a cooperative between nine states: Connecticut, Delaware, Maine, Maryland, Massachusetts, New Hampshire, New York, Rhode Island and Vermont. It is the first mandatory ETS in the United States.

California also has its own cap and trade scheme. Québec and California have been operating their programs, since 2012 and 2013 respectively. Both programs belong to the Western Climate Initiative, and the states linked their programs in 2014.

On 22 September 2017, California, Québec and Ontario agreed to extend the existing link of the California and Québec cap and trade programs to also include Ontario. The agreement will come into effect on 1 January 2018. The three states have climate policies to decrease their overall emissions by at least 35 per cent compared to 1990 by 2030.

Cap and trade is becoming increasingly more established in Asia. Tokyo initiated its cap and trade program in 2010, Korea’s national carbon trading market commenced in 2015, while China plans to start a nationwide ETS at the end of 2017. These nations have also commenced early-stage discussions and are looking towards possible future cooperation.

In 2010 South Korea legislated the Framework Act on Low Carbon and Green Growth. A small number of large companies were responsible for more than 60 per cent of the nation’s emissions, so the government introduced the Target Management Scheme (TMS) in 2012, which set reduction targets for individual companies. The TMS operated successfully, but did not allow for emissions trading. In January 2015, the Korean ETS (KETS) was launched.

To support the Paris Agreement, Korea set a 2030 target to reduce greenhouse gas emissions by 37 per cent from business-as-usual levels[v]. By the end of 2015, there were a 525 companies participating in the KETS.

The Japanese Voluntary Emissions Trading Scheme (JVETS) was introduced in September 2005 to support emission reduction activities by Japanese companies. JVETS was a voluntary cap and trade system, which concluded in 2010. In December 2010 the Japanese government postponed plans for a national ETS.

Tokyo’s cap and trade scheme for large scale business facilitates launched on 1 April 2010. It is Japan’s (and Asia’s) first mandatory ETS, and was set by the Tokyo Metropolitan Government. It has seen a large reduction in emissions.

Figure 4 shows that reductions made in the first compliance period of the program (FY2010-2014) are approximately 14 million tons over five years, the equivalent of five years’ worth of CO2 emissions from 20 per cent of Tokyo’s total households[vi]. This was achieved even with an increase in the size of covered facilities – in the 2014 financial year there was a one per cent size increase when compared to the previous year, and a four per cent increase when compared to the base year. 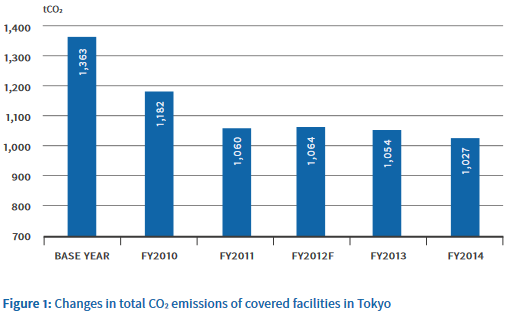 The Mexican carbon tax is primarily applied to gasoline and diesel emissions. The Mexican government is investigating the compatibility of a future ETS with the current carbon tax and The Secretariat of Environment and Natural Resources (SEMARNAT) is examining ways to achieve a more efficient carbon pricing.

In August 2016, SEMARNAT and the Mexican Stock Exchange signed a Memorandum of Understanding to implement an ETS Simulation Exercise for private and public sectors, so far 50 companies have confirmed their participation in the program.

The objectives of the exercise are to[vii]:

SEMARNAT aims to publish a draft ETS regulation by 2018, building on the lessons learned from the ETS Simulation Exercise and from international collaboration.

The debate around carbon policy has reignited in Australia with the release of the Finkel review in June as well as the recent debate surrounding the future of coal-fired power stations and the implementation of a clean energy target (CET). Finkel himself suggested a CET to fix the energy policy vacuum that has left us with a fragile national energy market and soaring wholesale prices.

The example of what other countries are doing to curb their electricity emissions might provide some guidance on the way forward for Australia, but whatever policy is used, the importance of stable, predictable policy is imperative.

The extent of the current energy challenges in Europe stemming from Russia’s invasion of Ukraine has been starkly highlighted by measures being undertaken in Germany. To reduce its reliability on Russian gas Germany is readying around 10,000MW of non-gas generation reserve capacity, including coal plants that were slated for closure. We take a look at the measures and the potential impact of diverging from its coal phase-out strategy.