Carbon policy: Would an invitation to close cut it?

Australia has committed to reducing emissions, with both sides of politics now moving toward lowering emissions to mitigate the risk of climate change. The most efficient mechanism to lower emissions is generally accepted to be achieved through a market, where total emissions are capped at a certain level and the market determines price, location and timing of investment. This type of policy is targeted at total emissions. However, there are other policy proposals that also claim to be direct and therefore, efficient tools to reduce Australia’s total emissions.

Figure 1 shows the current estimated generation entry and exit from the National Electricity Market (NEM). It is argued that due to higher marginal cost, there is a risk that black coal generation will exit earlier than brown coal, which will result in higher emissions intensity of the remaining generation fleet[i] 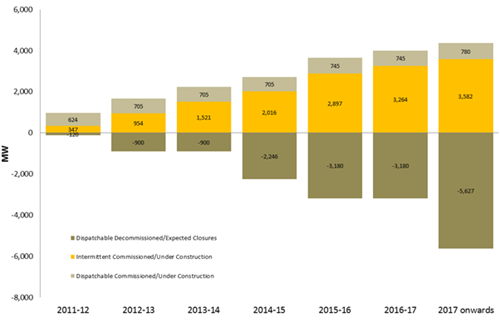 Source: Adapted by the Energy Council from AEMO, 2016

The proposed policy involves a competitive tender for closure awarded by the Australian Government[iii]. The four Victorian brown coal-fired generators would be required to provide bids to exit the market. The Australian Energy Regulator assesses the winning bid and awards the exit contract. The cost of the winning bid is funded through a levy on all remaining NEM generators in proportion to their future emissions. The majority of the costs will be levied back on consumers through higher prices after being recovered from market participants and passed through to consumers through higher wholesale prices[iv].

Under any policy to change the supply of electricity there will be a trade-off between emissions reduction and the cost of electricity. The brown coal generators in Victoria provide low cost electricity. Removing these low cost generators will likely increase the average wholesale price as higher cost producers supply the market.

Alinta’s closure of its brown coal generation and mining operations in South Australia is a case study of the impact the rest of the NEM can expect under a high penetration of renewables and lower energy consumption environment. The average SA wholesale price remained below the long term average cost of the plants resulting in the decision to exit. Prices were low in SA because of physical constraints in the local infrastructure, coupled with high penetration of renewables and resulting excess capacity. In this case, the existing market and policy frameworks resulted in the exit of the coal fired plants.

Alinta’s exit from SA provides a case study of the likely impacts of a large generator exiting the market in Victoria. An exit of a major baseload provider in Victoria would likely result in a short term price rise, with the highest price response felt in Victoria. Figure 2 shows the forward prices for baseload generation in each jurisdiction before and after Alinta’s announcement. 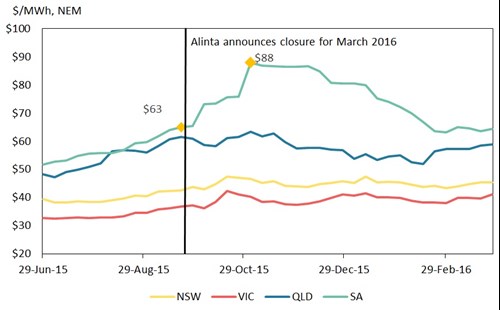 Frontier Economics has modelled the policy proposed and the estimated increase in the wholesale price after the exit of a large coal fired generator from Victoria. The modelling results indicate short term wholesale price rises as the market adjusts to the new supply function in each region. Frontier estimate the policy increases the retail price between 3 per cent and 25 per cent over a number of years.

Reputex also modelled the impacts of the payment for closure policy,[vi] and using a different approach, estimates the impact of a large generator closing to be insignificant. Reputex estimate an increase in the average annual NEM wholesale price starting in 2017‑18 of approximately $2.20MWh to $3.00MWh. And the cost levied on remaining generators is estimated to increase wholesale prices by around $2MWh to $5MWh.

“Our modelling estimates the corresponding increase in retail prices… with a rise of only 0.2 per cent to 1.3 per cent.[vii]”

The differences in results are due to modelling approaches, however, both sets of results are presented at a high level and it is not possible to identify the assumptions driving the divergent results. Assumptions on the bidding behaviour of firms, as well the price elasticity of demand would have significant impact on results. Both sets of modelling results assume a $5MWh levy recovered from remaining generators in the NEM and passed through to consumers. Both Reputex and Frontier modelled an initial sharp price increase, but price impacts moderated over three years from the auction.

The difference in results indicates the uncertainty around the impacts and the long run changes to the wholesale price faced by electricity consumers.

Ideally, any emissions reduction policy would take into account a market based approach where consumers and producers bargaining with one another drives investment and in this case retirement decisions. Under this type of mechanism, consumers and producers themselves solve the trade-off between lower emissions and low electricity prices. While some policies aim to target emissions, the impact on consumers in the long run also needs to be taken into account through analysis of price impacts.

[vi] Reputex, April 2016, Powering Up or Powering Down? Electricity price impacts of the proposed exit of coal generation from the NEM, Melbourne

[vii] Reputex, April 2016, Powering Up or Powering Down? Electricity price impacts of the proposed exit of coal generation from the NEM, Melbourne, page 15