With the current debate about the future of the Liddell Power Station in New South Wales, some media have focused on the plant’s capacity factor[i].

While the total megawatt (MW) capacity of generation is often quoted to assess a plant’s capabilities, it can be misleading given power plants do not run 100 per cent of the time. Two plants with the same capacity may produce quite different levels of energy across the year. Capacity factor gives the share of the actual electricity generated by a plant.

The analysis of plant capacity factors in Australia is outlined in Table 1. 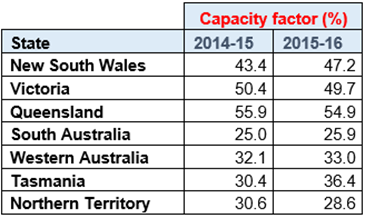 Source: Australian Energy Council Analysis, 2017 Note: Western Australia data includes all energy entering into the system from market generators in the South West Interconnected System with a capacity equal or greater than 10 MW.

Coal-fired generators have had the highest capacity factor in all states, except for Tasmania and Northern Territory as shown in Figure 1, where the primary generation is from hydro and gas-fired plants respectively. Coal power plants have typically operated throughout the year as baseload generation sources. Due to the prevalence of hydro plants in Tasmania, the capacity factor of hydropower for the state is the highest, reaching 41 per cent in 2015-16. The highest gas capacity factor was recorded in the Northern Territory and Queensland.

The capacity factors in Figure 1 are over the year and average out any temporary fluctuations in generation.

Source: Electricity Gas Australia 2017, Australian Energy Council. Note: The figures exclude solar and FY 2015-16 is a leap year, 8,784-hour was used in calculation a) In South Australia, Northern Power Station was the only operating coal power station, which operated for 314 days during FY 2015-16 before its final closure on 10th of May 2016. Capacity load factor is calculated based on the 314 day period. b) Including coal seam methane and coal waste methane c) Excluding pump storage plants d) Including both principal and embedded wind generators

The change in coal usage

Upon the closure of Hazelwood coal-fired plant in 2016-17 and the complete exit of coal plants in South Australia, the remaining plants increased power generation across the NEM region, which in turn resulted in a higher level of capacity factor due to a reduction in available generation. 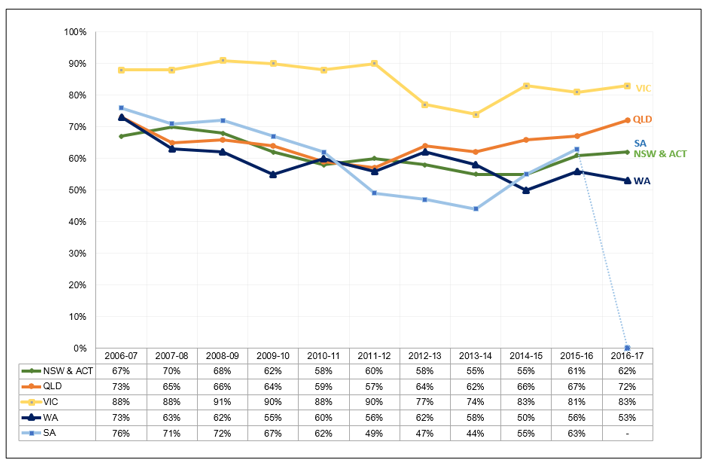 Note: In South Australia, Playford operated for 244 days during FY 2011-12 before being mothballed. From that time only Northern Power Station was used in capacity factor calculation until it was completely closed in May 2016.  In Western Australia, only the SWIS region is included.

A carbon price was in place in Australia during 2012-14, which led to lower capacity factor in many states.

During 2012-13, Queensland’s Tarong power station closed half of its capacity (two 350MW units in October and December 2012 respectively) with oversupply cited as a key factor and subsequently announced they would be brought back into service[iv].  Meanwhile the Swanbank E gas-fired power station was removed from service[v]. This year the State Government announced it would return to service in 2018[vi] as a result of tightening supply and higher wholesale prices.

The financial year 2015-16 marked the end of coal-fired generation in South Australia. The closure of Northern Power Station (and Playford B, which had been mothballed since 2012), means that South Australia will expect to see higher capacity factors for its remaining dispatchable, gas-fired power stations in future years. Capacity factors for wind and solar plant however, is unlikely to be affected given it is still determined by the availability of wind and sun.

Wind turbines or solar farms generally have low capacity factors given the intermittency of the electricity they produce. With South Australia’s superior wind resource, the state has received the most investment in wind generation over the past decade[vii], so it is worth taking a closer look at the performance of South Australian wind generation.

Figure 3 shows the number of days below a certain output level for South Australian wind farms. For a total of 206 days (56.4 per cent of the total number of days throughout the 2016-17 financial year) wind output was below 30 per cent capacity, while for 297 days (81.4 per cent) wind output for the state was below 50 per cent of total capacity. Actual output from wind farms in South Australia during 2015-16 and 2016-17 on average are 33.4 and 30.9 per cent respectively.

Figure 3: Histograms of capacity factor of wind in South Australia in the last two financial years 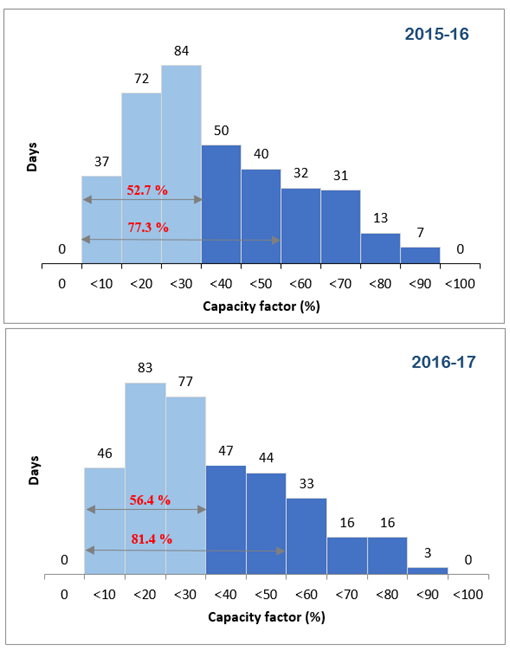 Tasmania has significantly high capacity factor wind resource sites (reaching 37 per cent). AEMO expected Tasmania’s wind resources could contribute a minimum of 8.5 per cent during peak demand, compared to a minimum of 9.4 per cent in South Australia[viii].

As more and more dispatchable electricity generators exit the market (such as Northern, Playford and Yallourn) there will be a requirement to source dispatchable generation from elsewhere in the market. This has been reinforced recently by the Australian Energy Market Operator’s report to the Federal Government, which prompted the current discussions over the future of the Liddell Power Station and coal-fired generation.