The growth of the global internet population has caused an explosion in online data. In terms of market capitalisation, the five biggest global companies are now Apple, Amazon, Alphabet, Microsoft and Facebook, replacing organisations such as Shell and ExxonMobil.

While computers provide a reduction in net energy consumption at a community level (through decreased transportation, better manufacturing techniques, etc.) increased computer use has led to significant growth in data centres[i] and a trend towards higher density and higher processing power equipment, causing a rise in localised energy consumption and emissions.

Information and Communication Technology (ICT) is fast becoming one of the largest sectors for the consumption of energy, and is now on par with the aviation industry’s carbon emissions from fuel.

Data centres – which are used to house computer systems - are the main driver of this growth and the trend is not looking to slow (Figure 1), sparking Schneider Electric’s global Chairman Jean-Pascal Tricoire to recently say: “The fastest growing energy demand is in IT and these data centres. The amount of power going into data centres now is comparable to a small city. It’s really the start of a new era.”[ii] 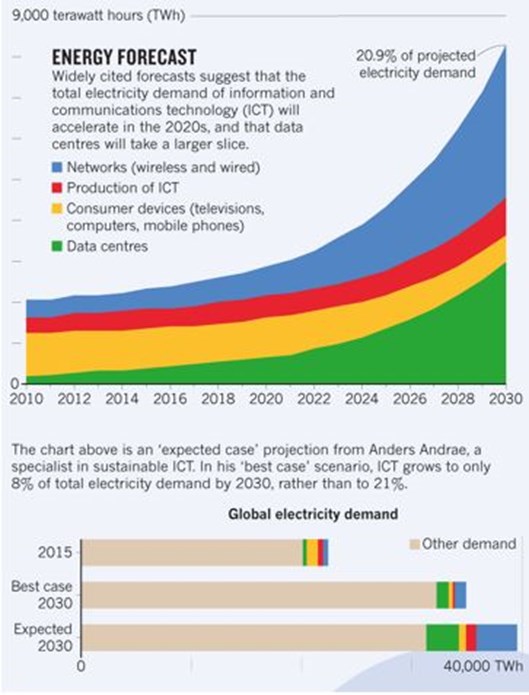 Internet data is being generated and stored at record levels. In the last five years the number of internet users has grown by over one billion. Now, more than 4 billion people – or 52 per cent of the world’s population - use the internet, up 7 per cent year-on-year.

The last two years alone has produced over 90 per cent of the world’s current data[iv] and according to Dozo’s 2017 Data Never Sleeps 5.0 report, more than half of the globe’s online traffic is now coming from mobile smart phones[v] - further driving an increase data generation.

Every Google search, Facebook post, tweet, swipe and Instagram post all need to be powered by data centres. Cloud-based computing and a growing number of websites also require data centre back-up, while this year the number of Australians who watch Netflix is expected to surpass those who watch subscription TV. 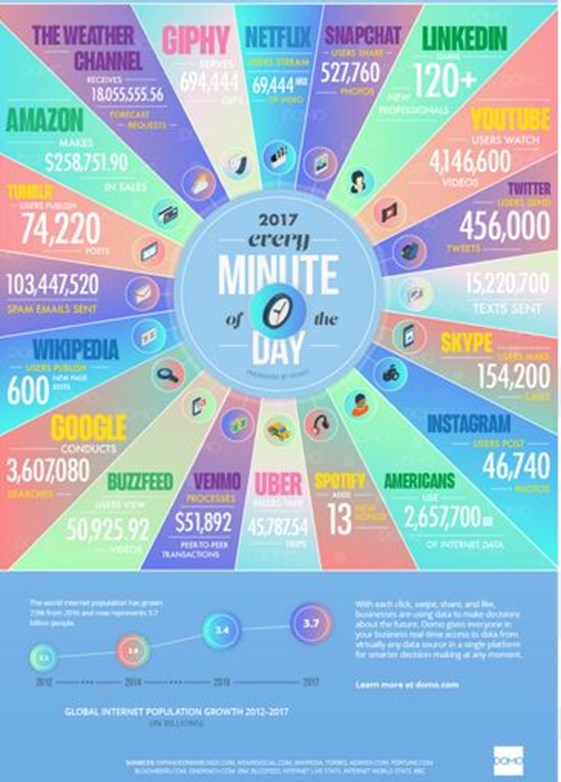 Data centres consume around an estimated 200 terawatt hours (TWh) annually – more than the energy consumption of some countries (Argentina, Ukraine, Thailand[vi]) half of the electricity used for transport worldwide, and around 1 per cent of global electricity demand. Data centres contribute around 0.3 per cent to overall carbon emissions, while the ITC sector accounts for more than 2 per cent of global emissions[vii].

Data centres are anticipated to grow to consume a fifth of all the world’s energy by 2025, and now have the fastest growing CO2 within the ICT sector due to technological advances such as cloud computing and the rapid growth of the Internet[viii].

And if cryptocurrencies continue to grow, there could be a sharp rise in energy demand. It is estimated that the current global power consumption for the servers that run Bitcoin’s software is a minimum of 2.55 GW (around 22 TWh per year) which is roughly the same as Ireland’s power consumption.

Bitcoin is founded on a blockchain that virtually transfers value from one party to another. While the cryptocurrency’s exchange price is extremely volatile, if it were to stay at its recent price of $8,000 power usage of the network would peak at 7.67 GW (67 TWh per year) or one-fifth of Britain’s energy use[ix] as more processing power is required to mint the virtual coins.

There are now around 50,000 data centres across Australia, and 95 per cent of these are small-scale. Individual centres are custom designed, so when the average Australian centre was initially built in 1994 it was, generally, inefficiently designed. As a data centre grows, its energy consumption increases largely due to the cooling energy required to maintain a controlled temperature environment. According to an IDC Australia report:

“The major challenge faced by data centre managers today is that they lack a comprehensive understanding of their datacentres' energy environment. To operate efficiently, there is a need for visibility into how and where power is being consumed by IT systems across the environment and whether or not there is adequate cooling capacity that is correctly provisioned to the IT loads. Energy efficiency extends beyond the IT systems to the data centre infrastructure in support of those systems. Today, many data centres have over-provisioned or ineffectively provisioned their power and cooling, resulting in stranded power that does not make full use of the data centre capacity, thus creating hotspots that risk system failures.”

With the growing rate of data load, companies are now looking to reduce both costs and emissions by running centres more efficiently. The ageing centres coupled with the cost of electricity is pushing more people to consider colocation – a large scale facility where equipment and space are available for rental. There are currently 107 colocation centres that are classified as ‘enterprise size’ in Australia, and they consume around the same amount of electricity as Coles’ 807 supermarkets and Woolworths' 995 stores[x].

The ICT sector is now looking at how to increase the energy efficiency of processors and data centres to counter increased internet traffic and data loads – and while more needs to be done, advances are being made[xii]

Some believe that the ICT sector might also give renewables a leg-up. Facebook and Apple have committed to using 100 per cent renewable energy, with other online companies following suit. Google is now the largest corporate purchaser of renewable energy in the world.