According to the Energy in Australia 2015 report, we are currently the third largest liquefied natural gas (LNG) exporter, behind Qatar and Malaysia. Australian exports of LNG will rise significantly by the end of this decade due to the large number of projects coming online in the near future.  The Asian market is Australia’s major export destination, with Japan being our largest importer of LNG[i]. In 2011, the natural disaster which crippled the Fukushima nuclear power plant also triggered the closure of Japan’s nuclear reactors. The closure of these plants has directly influenced Australia’s LNG exports, with Japan accounting for more than 80 per cent of Australia’s LNG exports in 2014.

As of late 2015, around 45 million tonnes of LNG capacity per annum were under construction in Australia and will be ready for production around 2018-19[ii].  The 2014 and 2015 Energy in Australia reports, stated that the ramp-up of LNG projects and increased supply has led to a recent LNG price decrease, while domestic demand has remained constant. Australian LNG export prices declined by 3.8 per cent in 2014-15[iii]. Figure 1 shows Australia’s LNG exports and the equivalent value over the last 10 years.

Figure 1: Australia’s LNG boom and prices over the past 10 years 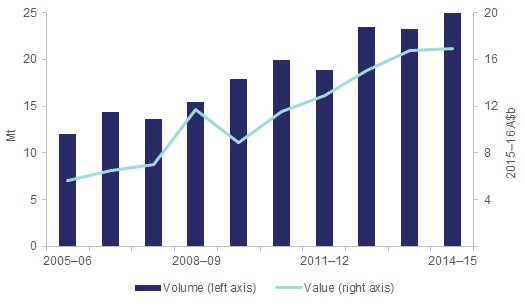 Asian and Asia Pacific markets continue to dominate the market share of LNG imports, combining for 75 per cent of global demand in 2014[iv]. The Asian market is Australia’s main importer. Figure 2 shows the volume of Australia’s LNG trade by market, with Japan and China are our biggest LNG destinations, accounting for 98 per cent of our exports in 2014. 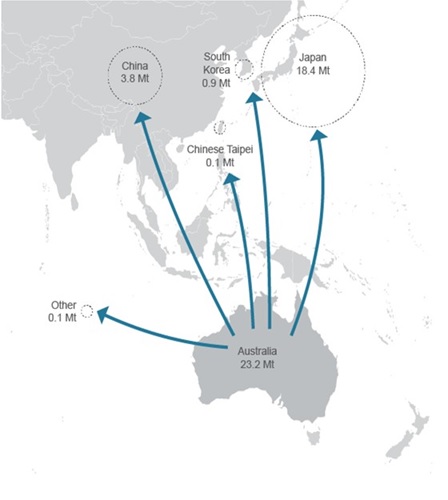 Last year, an RBA report, predicted that Japan’s import volumes would increase by 300 per cent from roughly 12.5 million tonnes (mt) in 2008 to 37.5mt by 2020[v]. More recently, the Japanese Prime Minister, Shinzo Abe, emphasized that Japan could not afford to continue importing oil and natural gas, stating “The growing reliance on thermal power generation has stalled Japan’s efforts to reduce greenhouse gas emissions”[vi]. He also asserted that the reactivation of nuclear reactors is necessary to help lower current high energy prices. As such, four reactors had been cleared to restart operations, and two have already been brought back online in August and October of last year respectively[vii].

China is our second largest LNG importer, and is projected to have a big jump in LNG imports from Australia, although Chinese demand could be affected by slower economic growth[viii].  The RBA suggests that Japan and China will purchase 20 per cent and 45 per cent respectively of Australian LNG exports in 2020

Recently Asian buyers have become very interested in low North America gas prices. In 2014, 40mt per annum of LNG sales have been agreed between US LNG projects and Asia countries, specifically Japan, South Korea and India[x]. The main reason for their interest in US LNG market is that contracts are based on Henry Hub pricing, where gas production has been consistently priced at a discount rate compared to other gas benchmarks in the Pacific Basin and Europe[xi].  Figure 3, shows Henry Hub has traded below $5 million British thermal units (mmBtu) over the past six years.

Since existing Asia-Pacific contracts are typically linked to oil prices, the price gap to the US is closing, although floor prices in contracts may preclude complete convergence. In any case, in the next few years, LNG prices are likely to be depressed due to increased competitiveness in the global LNG market. Since gas production projects are designed to operate for another 30 to 50 years, this situation has the potential to continue into the longer term, unless expected demand growth eventuates. LNG demand is projected to increase as countries continue to move to a less carbon intensive energy mix, given the fact that gas powered power plants are able to substitute for coal as baseload generation, and have the flexibility to complement intermittent renewable generation sources.

Australia has an opportunity to help supply projected increases in demand, but this will require the maintenance of competitiveness and access to the widest possible sources of gas.

[i] Department of Industry, “Energy in Australia 2015”, http://www.industry.gov.au/Office-of-the-Chief-Economist/Publications/Documents/energy-in-aust/Energy-in-Australia-2015.pdf