Sarah McNamara, Andrew Dillon and Jemena CEO Frank Tudor represented Australia at the International Electricity Summit (IES) on 6 – 8 October in Fukuoka, Japan.  The IES is held once every 18 months and attended by electricity company CEOs and industry associations from the European Union, United States, Japan, Canada and Australia.  It is an invaluable opportunity to understand the challenges occurring in electricity markets globally and to share the Australian experience.

The article below is an excerpt from the background paper presented at the conference.  More information regarding its Communique and outcomes will be shared in an upcoming edition of EnergyInsider.

A key feature of the conference was commonality of experience.  All delegate nations confirmed that they were facing the challenges of the energy transition to an electrified and decarbonised economy.  All were concerned about policy settings and Government interventions, and agreed that there was no one silver bullet solution.

Much of the discussion centred around ‘’electrification’, a term not commonly used in an Australian context, but which refers to the percentage of electricity (as compared to energy) consumed across an economy.  Australia indicated its support for the goal of electrification,  but noted that it works best in hand with decarbonisation of electricity supply.

An additional focus of discussions related to the importance of the customer – at every stage of the supply chain.  Delegates agreed that the customer is the most important stakeholder relationship and that maintaining reliability and affordability for them is the highest priority.

Australia’s background paper and feedback in discussions was warmly received.  Our status as being at the ‘bleeding edge’’ of renewables integration is well understood.  Both Energy Networks Australia and the Australian Energy Council (AEC) will proactively engage with the IES in the lead up to the next summit, to ensure our knowledge and experience can continue to be shared.

Australia’s electricity system is being disrupted by a decade-long, uncontrolled experiment in high renewables integration. This has created both valuable lessons and serious problems. While only a small economy by global standards, the experience of the Australian “transformation” is a cautionary tale for others.

The Australian electricity “experiment” has comprised a range of government policies forcing in about 27 gigawatts of wind and solar PV into Australia’s main two relatively small and isolated electricity grids (see Figure 1 below). 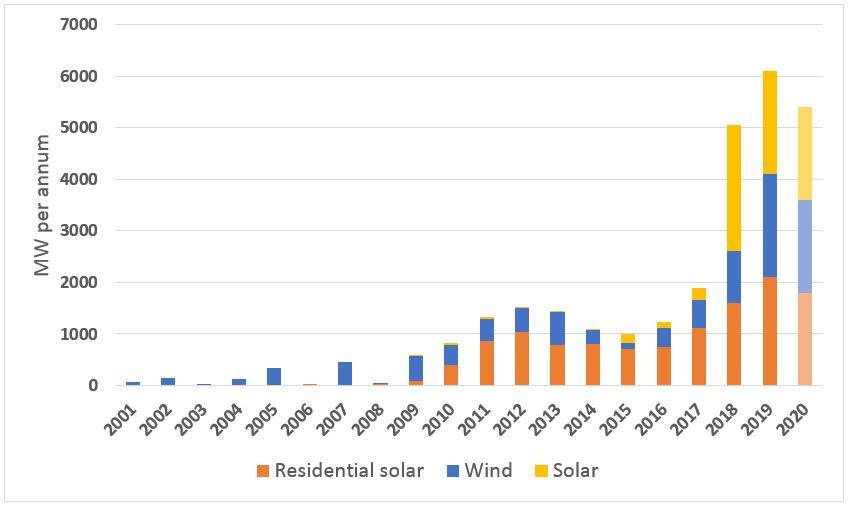 About 40 per cent of the large-scale renewable capacity has been installed in South Australia. SA now derives about 50 per cent of its total generation from wind and solar PV. Some 20 per cent of Australian households now host rooftop solar PV panels (2.1 million households). Almost no firming generation has been built to support this scale of intermittent generation.

Over the past decade, more than 5000 megawatts of coal-fired generation has exited the market due to age or unsustainable market conditions. Remaining coal-fired generators are increasing output to meet the gap in supply but Figure 2 shows the impact of retiring coal generation over coming decades. 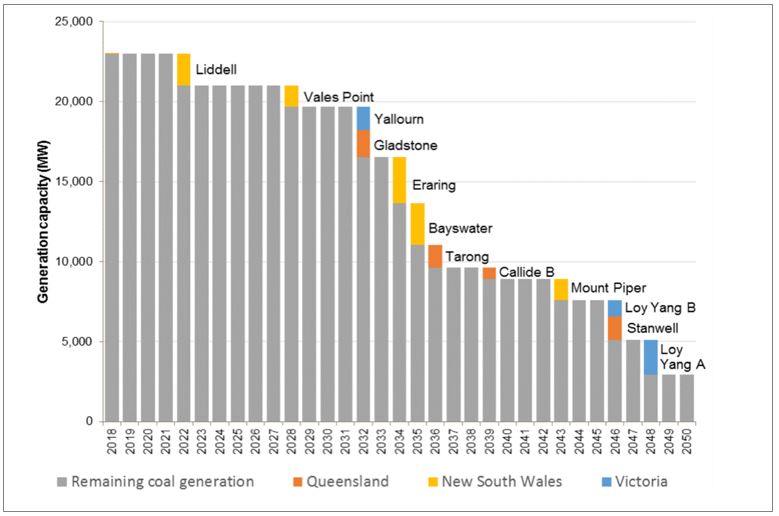 In the absence of co-ordinated national climate and policy leadership, there has instead been a suite of sometimes competing policy initiatives around the country.

There are now more than 2.1 million solar PV systems installed in Australia, about 20 per cent of all residential dwellings. These systems are not uniformly distributed, which means there are many suburbs and towns in high solar PV states (Queensland, South Australia and Western Australia) with penetration rates of well above 50 per cent or more of all dwellings.

This rapid growth of distributed energy resources has led to significant challenges for the power system, particularly for voltage management. These challenges are the subject of a major project by the system operator and Energy Networks Australia titled Open Energy Networks (OpEN).

There are also great opportunities if Australia’s enormous uptake of distributed energy resources can be optimised into Australia’s electricity grids.  If optimal integration can be achieved, OpEN estimates more than $1 billion in savings could be delivered by 2030 through avoided investment in network augmentation.

While increased interconnection has been a standard worldwide response to increased variable generation and the closure of thermal generators, Australia has been slow to act in this area. This was not helped by a system still largely driven by state-based planning and an investment test designed for new transmission to serve demand growth, not supply changes.

In July 2018, the Australian Energy Market Operator (AEMO) produced its inaugural Integrated System Plan (ISP), a cost-based ‘engineering optimisation’ plan forecasting transmission requirements for the NEM over the next 20 years. This identifies priorities for transmission projects, some requiring immediate action and others needed over the medium and longer term.

Modelling for the ISP shows that by spending eight to 15 per cent of the bulk system investment needed on transmission rather than generation will deliver total system cost savings of between $1.2 billion and $2.0 billion.

Modest upgrades to the interconnectors between NSW and Queensland and NSW and Victoria are likely to proceed later this year.

Other proposed transmission lines include a new link between South Australia and NSW, a second undersea cable linking Tasmania and the mainland (to allow more wind farms on Tasmania and to access up to 2000MW of proposed pumped hydro), and two separate transmission systems linking under construction pumped hydro Snowy 2.0 with major load centres in Sydney and Melbourne.

There are still further plans for transmission augmentation to enable renewables development in a number of renewable energy zones, identified for their wind and/or solar energy properties.

The challenge with transmission planning is to balance the requirement for greater connectivity with the need to attract new investment in firm generation. Related to this, the national rule maker is reviewing if Australia’s open-access regime needs amendment to allow generators firmer access in return for financial contributions to transmission network costs.

There have been some key take-outs from Australia’s uncontrolled experiment of high renewables integration to date including:

This article is an extract of the paper presented by Sarah McNamara (CEO, Australian Energy Council) and Andrew Dillon (CEO, Energy Networks Australia) at the International Electricity Summit, held in Fukuoka, Japan on 6 – 8 October.

The full paper can be found here.