Australia will continue on an upward emissions trajectory, despite current policy, with forecast emissions growth of six per cent through to 2020, according to the recent Reputex Market update Behind the Numbers – Downward trend reverses as Australia begins climb to new emissions high.[i]

What the Reputex report doesn’t highlight though is the trend of falling consumption which led to decreased electricity generation and emissions over time, something which has reversed with consumption increasing. Additionally thermal generation capacity has been required to meet demand when wind hasn’t blown or hydro dam levels are low. Given the rapid and major changes in government policies affecting the sector, it’s too early to identify future trends.

Figure 1 from the Reputex report shows the emissions growth between FY14 and FY15 which represents the first increase in financial year-on-year emissions since 2005-06, when Australian emissions reached their historic peak.

2014-15 is the first year demand has increased in over five years. The trend of falling consumption led to reduced electricity generation and, with it, emissions over time, and this appears to be reversing as consumption grows again.

The trend of falling electricity generation and emissions from 2009, was also evident before the carbon tax was introduced to try and encourage emission reductions. 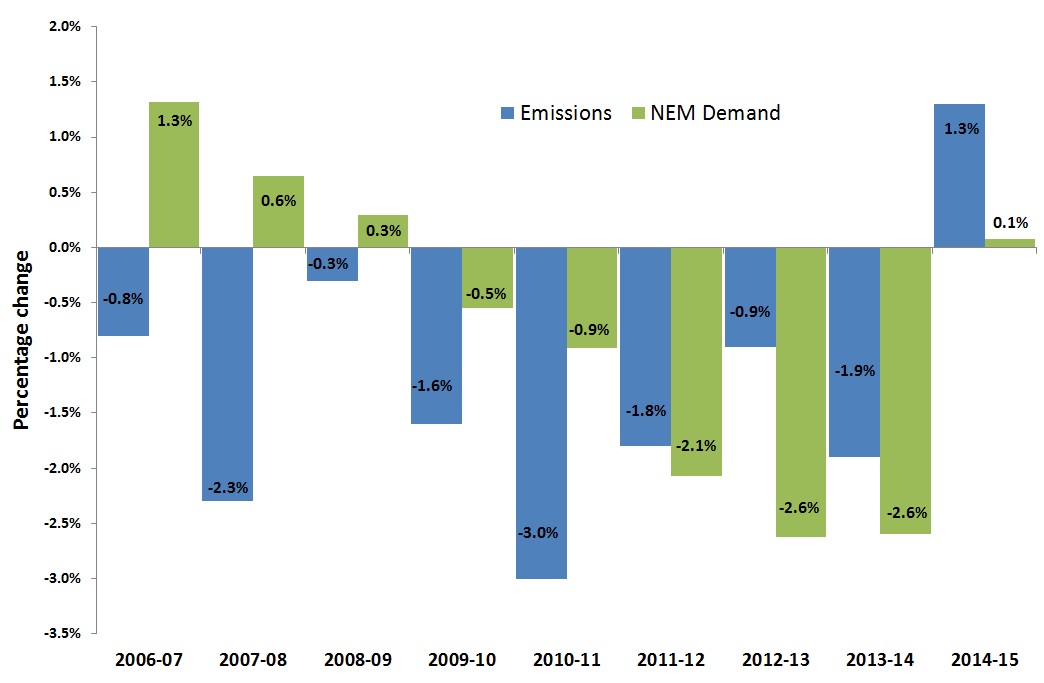 According to the report, emissions growth over FY15 was driven by the electricity sector, which increased emissions by 5.3Mt (2.9 per cent) as brown and black coal generation began to grow its share of the fuel mix. With new liquefied natural gas (LNG) and coal mining facilities ramping up, the report highlights an increase in direct combustion and fugitive emissions between 2015 and 2020 of 18 Mt (19 per cent) and 8 Mt (21 per cent) respectively.

In response to new demand from LNG projects, electricity sector emissions are projected to increase 5 per cent through to 2016-17, when the addition of large-scale renewable electricity is predicted to come online after years of stalled investment, the report highlights.

Put it into context

A number of events have resulted in higher thermal generation in 2014-15 compared to the previous couple of years. The repeal of the carbon tax is an obvious factor for the increase in emissions although a coincidence of events in South Australia and, more recently, in Tasmania has resulted in (and could continue to result in) increases in thermal generation across Australia.

With South Australia sourcing around 39 per cent of its generation from variable supply renewables, specifically wind and solar, there have been times when wind has not blown with thermal generation increasing to meet demand[iv].

Output from hydro facilities has declined significantly since the repeal of the carbon price on 1 July 2014 and has been replaced with increased coal output (brown coal output has increased by 6.2 per cent).  Recently a coincidence of events in Tasmania, with hydroelectricity generation decreasing because of the State’s low rainfall leading to low dam  storage levels and a fault in the Basslink interconnector, which have the led to the restart of the combined cycle gas turbine at the Tamar Valley Power Station.[v]

Compared to the rest of the world

Analysis in the report also indicates that Australia’s projected emissions through to 2020 are among the highest of large developed economies currently reporting under the United Nation’s Framework Convention on Climate Change (UNFCCC) as shown in Figure 3.  Figure 3 compares the percentage change in greenhouse gas projections between 2000 and 2020 among large Annex 1 countries/regions under a ‘with measures’ scenario, accounting for policies and measures that are either implemented or adopted by each country.

Figure 3: percentage change in greenhouse gas projections between 2000 and 2020[vi]

The United Kingdom has had a large decrease in its emissions, driven by the collapse of coal generation in the UK where the carbon price doubled in the 2014-15 financial year.

Nevertheless, the international comparison on emissions is on current policies and measures that are either implemented or adopted by each country and not proposed changes in policy. The short-term increase in emissions created by changes in Government policy could change with adjustments to that policy over time.

The Australian Government has announced an intention to review its Direct Action Plan policy in June 2017, which may change the projections for emissions in Australia. Projections such as these assume that current policies won’t change.

In addition, some thermal plants are planned for closure and it is not clear if the report has taken this into account. Alinta Energy has brought forward the closure date of its Flinders operations (the Northern and Playford B power stations at Port Augusta along with the Leigh Creek coal mine), which will not operate beyond March 2016. This is expected to decrease emissions in Australia.[vii]

[iv] esaa, “Renewable Energy in Australia: How do we really compare? – Factsheet”